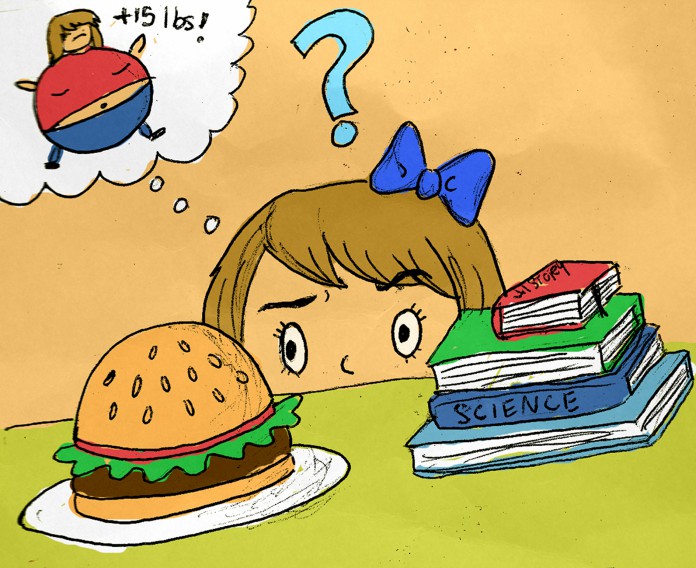 To many college freshmen across the nation, the freshman 15 is notorious and dreaded. But according to a recent study at Ohio State University, which will be published in the December issue of “Social Science Quarterly,” it is nothing more than a “media myth.”

The study, which was conducted at the university’s Center for Human Research, revealed that a higher percentage of students actually lose weight their first year of college rather than gain weight.

Unlike previous studies, which only followed a small sample of students in a university throughout their college years, this study used data from the National Longitudinal Study of Youth, which started tracking 13-year-olds in 1997 and has been tracking them ever since. Using this data, OSU researchers had over 7,000 subjects’ data from before, during and after each subject’s college years.

The researchers noted that while 10 percent of the students in the study did gain 15 pounds or more, a whopping 25 percent actually lost weight. The average weight gain was 2.5 to 3.1 pounds for women and 3.9 to 4.5 pounds for men. Researchers also compared those numbers to the average weight gain of subjects who did not go to college, but were within the same age bracket as the students who did go to college. On average, those who did not go to college only gained half a pound less than those who did.

“I’m glad I lived in an apartment my first year,” Becca Lofthouse, a third-year health services major at California State University Fullerton, said. “Cooking my own food meant I ate a lot less freshman year. Plus, with the gym, I actually lost weight.”

The lack of discrepancy between weight gain among students who went to college versus those who didn’t led researchers to conclude that weight gain isn’t dependent on going to college, but on simply growing up and becoming an adult.

Jay Zagorsky, the co-author of the study and one of its research scientists, said that weight gain in college, rather than being a phenomenon among college freshmen, is a very individualized process having to do with family history, eating habits and drinking habits. Regardless, he stressed the importance of practicing healthy habits to avoid gaining weight, such as paying a little more to eat healthier foods, avoiding high-calorie foods, and drinking heavily. Utilizing workout facilities, going outside, and taking a break from sedentary studying to get up and moving can also counteract weight gain.

“College is a wonderful time to learn how to eat healthy on your own, without mom and dad looking over your shoulder,” he said. “The idea is to try to set up healthy living habits early in life.”

The term ‘freshman 15’ was first mentioned in a 1989 issue of “Seventeen” magazine, and has reached the ears of many college students in years since. Despite what the study shows, some students still believe that Zagorsky’s research is not legitimate.

“I think it’s real,” Yasmin Namin, a first-year biological sciences major, said. “But only for people that don’t pay attention, because it’s possible to still eat healthy. I know people who have lost weight.”

“I know I’ve gained weight,” Rocky Jennewein, a first year undeclared major at El Camino College, said. “But I live at home, so it’s not like it’s dining commons food. I just have more time on my hands. I think that’s the real problem.”

Overall, it appears that the safe way to go to keep off unwanted weight–regardless of if it is 15 pounds or five–is to maintain a balanced lifestyle, even amidst the stresses of college.

“Many people going off to university are worried about many things,” Zagorsky said. “Worry about your roommate or passing your exam, but don’t worry about gaining 15 pounds.”