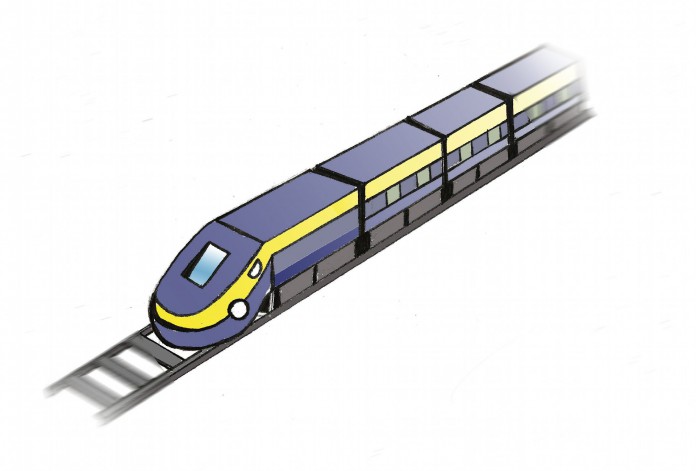 The project to build a high-speed bullet train from Southern California to the Bay Area is estimated to be completed in 2033 with a cost of $98.5 billion, changed from an initial estimate of being completed by 2020 with a $43 billion cost. The California High-Speed Rail Authority, the state agency planning and running the project, said in a press release that the plan “updates cost estimates, ridership figures and funding expectations to reflect current economic realities.”

The press release claims that as the state’s population rises from a current 38 million to an estimated 360 million by mid century that transportation costs will reach as much as $171 billion if a high-speed rail is not constructed. This increase would require the construction of a “2,300 lane-miles of highways, four runways, and 115 airline gates” to match demand.

Economically, the construction and the completed railway is planned to create 100,000 jobs over the next five years and another million as the project moves forward.

“I guess the question is how many other technologies and associated industries does the U.S. want to fall behind,” said University of California Santa Barbara Engineering Associate Professor Gary Hansen. “There is no doubt when looking around the globe that rail can be a fast and very efficient mode of transportation and a part of any modern economy.

So if you are against jobs, or against exports or against a modern economy, then you are probably against the rail project.”

The project is planned to start construction next year beginning with a 130-mile segment running from north of Bakersfield to just south of Merced. This segment is funded through federal funds and voter-approved Proposition 1A which passed in 2008. The proposition approved the issuance of $9.95 of general obligation bonds, partially funding the construction.

In the press release, Authority Board Member Jim Hartnett said the plan is “a new direction, reflecting community input, focusing on the concerns of local and regional rail systems as a partner in a blended approach.”

Concern over the increased cost has caused several California residents to rethink allowing the project to move forward and their initial approval of Proposition 1A. First-year UCSB student and biology major, Jessica Rangel, believes that the costs have greatly overrun the benefits.

“They should not build it,” said Rangel.

Other students believe that building the railway will ensure America does not fall behind European and Asian countries that have already constructed similar projects. First-year communications major Presly Mellor thinks that allowing the United States to fall farther behind is not acceptable.

“I think it’s a good idea because America sucks at mass transit in comparison to other countries like Japan and European nations,” said Mellor. “I think we should take into consideration the cost and safety. It’s a really excellent idea. I think we should investigate high quality and low cost if possible.”

The California High-Speed Rail Authority is aware of these concerns and is allowing a 60-day period in which the public may comment and help shape the final plan. This completed plan will then be provided to the legislature in January 2012 for final approval.

“I look forward to reviewing the business plan and determining the path forward for adding high speed rail to our mix of transportation options in California, ” said Fresno Mayor Ashley Sweareng.