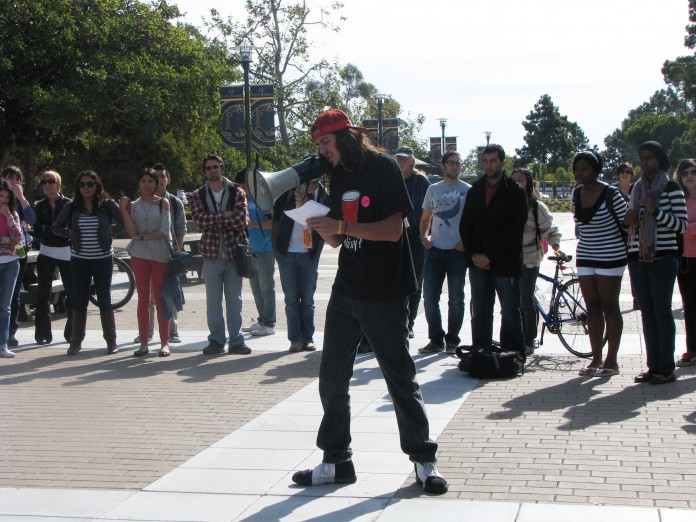 “They said cut back—we say fight back!” was one of the resounding cheers heard from protestors participating in the Budget Cut Rally on Nov. 9 in the Arbor. The rally was organized by an amalgamation of students and workers in an effort to take a stand against the University of California Regents’ decision to cut $650 million in funds this year. It featured a variety of speakers, all of whom conveyed the same message to students: The time to act is now.

In the past year, the UC Regents approved measures to increase tuition to an all time high. An increase of 10.5 percent, in addition to the initial eight percent increase which was passed earlier in the year, has caused tuition for the current undergraduate to rise to $12,192. The recent decisions have been received with nothing short of frustration and disgust for the UC system.

Regardless, UC President Mark Yudof has indicated that the end to increases is not in sight. The Regents are planning to adopt a measure that would increase tuition to $22,000 over the next five years. Protesters did not take to the news kindly.

“This is one of the few times where corporations are sitting on the most money they have ever sat on in the history of this country,” said sociology graduate student Jonathan Gomez. “We pay more than we ever have and we get less.”

This has proved true, based on the current difficulties students face in enrolling for the classes they need. The amount of students teachers have had to turn away in recent years has been concerning to all members of the UC system.

“Our country is struggling. Our education system is failing,” said Edward Woolfolk, who has worked for the University of California Santa Barbara since 1973. “Students who do not act to stop this are only hurting themselves.”

Students who found fault with the measure agreed that education is a priority for the future generation. The budget for the school systems in California is being steeply reduced, when other costly endeavors, such as campus construction, continue to be funded. In addition, the state provides large funds to prisons statewide. By putting the needs of criminals above education some students are more frustrated than ever by the budget cuts.

“We’re spending thousands of dollars to incarcerate them instead of educating our citizenry, and I think that’s unacceptable,” said fourth-year sociology major Eric Wolff.

The activists emphasized the need to unite and denounce the decision passed down by the UC Regents. Speakers, hoping to raise awareness by organizing the rally, are doing what they can to get more students involved because of the understanding that these cuts will have a major effect on the quality of their education. Aside from organizing protests, activists are working on a committee to attend a conference where they would speak to members of the board regarding the tuition increases.

Activists agree that by speaking up, they can make a difference.

“Somewhere people became complacent, and they just stopped fighting. We have rights that we don’t know, and we think everything is impossible when it is not impossible,” said Woolfolk.