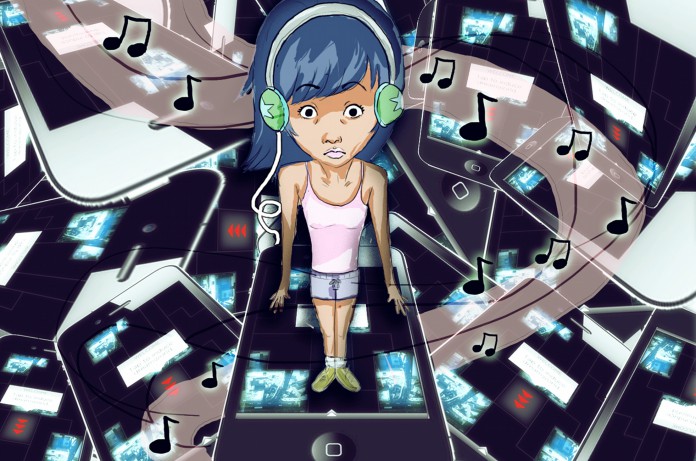 Have you ever woken up, unsure if you were really awake, or still dreaming? The iPhone application “Inception- The App” might just make you feel as if you’re perpetually living in a dream, even when you’re awake.

“Inception- The App,” released December 2010 by Remote Control Productions as a free application for the iPhone and iPod Touch, takes sounds from the environment around you and plays them back to you after modifying them. These sounds are overlaid on parts of the application’s dreamlike soundtrack, mostly drawn from the movie “Inception,” to create a surreal atmospheric effect, which the application’s creators dub “Augmented Reality.”

How the sounds around you are modified and which music plays depends on which one of the application’s 13 “dreams” you are currently situated in. Your “dream status” depends on factors such as location, time of day, movement, noise levels and proximity to other users of the application. For example, sitting still in a noisy environment produces a dream called the “Still Dream,” while moving around brings out the “Action Dream.” These dreams, assuming they have been unlocked in the standard mode, can also be played in “infinity mode,” which prevents the dream from ever changing until the mode is disabled or you end the dream.

This may all sound a bit cerebral and gimmicky, especially since it’s a free application, but it surprisingly works very well.

The movie “Inception” actually lends itself quite well to this type of application, with its surreal setting and visuals, and wonderful soundtrack by “Inception” composer Hans Zimmer.

The application’s user information suggests using a headset (including a microphone) to get the full sensory experience, though just using a pair of regular headphones works fine too. The only thing to avoid is using the built-in speaker and microphone simultaneously. In that case, the sound seems to feed back into itself.

What I found appealing is how the application tends to call attention to very mundane sounds that one might normally overlook or ignore. I played it in the library a few times, which was surprisingly fun. My typing was picked up by the microphone. It echoed to the point that it sounded like a waterfall. Other, more singular sounds, like footsteps, also echoed about three times. Granted, this type of effect can be somewhat awkward when someone blows their nose, but overall, the atmospheric effect is rather remarkable.

How dreams change and morph their styles depending on your surroundings adds some variety to the experience as a whole. The 13 different dreams featured in the application were designed to match the dream experience to the situation its users are engaged in. For example, when you move around, the “Action Dream” is activated. This dream blasts energetic music that creates a feeling of urgency. I imagine it would be great for running or jogging, but it is a bit unnecessarily intense for walking casually to class. Another, the “Quiet Dream,” takes the few sounds in a very quiet, still environment, and magnifies them.

Each dream references parts of the movie. The “Reverie Dream,” which is the first dream you listen to when you start the app, recalls the beginning of “Inception,” where the character Cobb washes up on the beach. Other dreams play with the movie’s concepts in interesting ways. The dream “Limbo” is achieved if three different dreams are accessed within the same usage session, and begins to play as its own dream. The “Still Dream” is a bit more subtle in its content, with a reference to a pivotal turning point in the film (which shall remain unnamed here to prevent spoilers).

All in all, this is a wonderful app to have. Although you don’t need to have seen the movie, “Inception” fans especially will enjoy hearing the sounds of their life echoed and mixed into its sonically fascinating soundtrack.