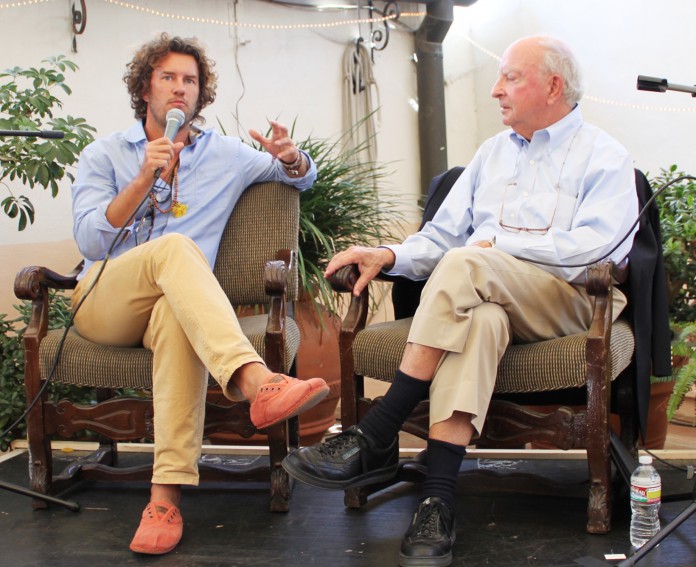 Founder of TOMS Shoes, Blake Mycoskie, has a little more of an impressive resume than most dream of. Winner of the People’s Design Award, invited attendee of a meeting with President Obama’s Senior Administration and featured in a CNBC segment titled “The Entrepreneurs” hosted by Donny Deutsch, Mycoskie has developed major success through giving by the age of 35. The founder and creator of the ultra-successful philanthropic label of TOMS Shoes strode along swiftly with a unique ease of subtle confidence and openness while giving a talk at the Arlington Theater on Saturday, October 1.

Mycoskie’s career began at the age of 19 during his starting years at his alma mater, Southern Methodist University in Dallas, Texas, where he had planned to venture on with his life as a professional tennis player. That attempt soon came to a halt when he injured his Achilles’ tendon for eight months. He became partially immobile, unable to do “laundry in the downstairs basement” because of his inability to hobble around with an enormous sack of clothes.

Mycoskie’s helplessness due to his injury allowed him a great deal of time to think about the possibility of vision and having a vision to produce a service. Thus, he soon began a small laundry service in college that grew exponentially to a mid-sized million dollar laundry business in his attempt to learn more about getting hands-on entrepreneurial experience. The success of this company gave way to other increasingly popular ideas, culminating in the creation of TOMS.

The idea of TOMS, short for “shoes of tomorrow”, came to the young visionary when he embarked on a trip to Argentina as a contestant on the popular television series “The Amazing Race” in 2002. He began to notice many of the impoverished children in rural Argentina were not allowed to attend school because they could not afford “black school shoes.”

Mycoskie was driven to find a solution to this problem simply by supplying shoes for children to support their education. At this point, he had yet to realize that “the next fun and rewarding 24 hours of my life would be the rest of my life.”

The next step was “generating a revenue stream through business instead of relying on donations.” The model of his philanthropic for-profit business would incorporate the one-for-one prototype where “for every pair of eyewear we sell, we give out an eye surgery for people in need of vision care and for every pair of shoes we sell, we generate the funds to give a pair of shoes for a child in need residing in an impoverished, rural part of the world.”

TOMS functions on a root philosophy of “sustainable giving.”

“TOMS gives in a responsible, sustainable way, while still being a thriving business,” said Mycoskie.

The point of his work is to make profits at a rate that will keep equilibrium and harmony with his rate of giving. By sustaining this model, Blake will have invested in a unique product distribution that will not only profit the business, but also the people in need on a simultaneous scale.

A minor source of public criticism has surfaced in a way that questioned his motives as a philanthropist.

A local press personnel at the event asked, “Why does TOMS decide to remain a private business that does not disclose their earnings? How do you respond to the idea that you are personally profiting off people’s altruism?”

The TOMS business keeps its profits and revenue information private to “prevent vendors from having more leverage.”

“I set it up as a for-profit, but my first intention was to price the shoes with the ability to do three things: pay for the necessary materials, fund the production, and also sustain the ability to give away a large portion of shoes to people in need,” said Mycoskie. “TOMS spends $ 0 on advertisement and allows our customers and supporters to be our main marketers.”

By divulging more information, vendors of the product would develop the capability of fluctuating the price of their business and product distribution by exponential amounts at will. The vision of TOMS is to sustain its ability to give, so allowing vendors of the product to drive up their prices would inhibit and hinder the ability to be philanthropic due to financial bind.

The atmosphere of TOMS intends to foster a collaborative not a corporation.

“We are making a promise, if we grow too fast, we will have a hard time sustaining the ability to give,” Mycoskie said.

TOMS had plans to remain grassroots and as least commercialized as possible.

“People at the top of TOMS want to preserve the essence of what we really started with and keep the environment sustainable and intimate,” said Mycoskie.

This same environment is how his company also approaches the process of hiring.

“Story is a critical asset in business and brand. People remember stories much more than facts or figures. So I ask, ‘What’s your story?’ ” said Mycoskie.

By flexing their philosophical expectation of homegrown integrity, TOMS succeeds in distinguishing themselves as a business that represents a new generation of supporters and customers capable of relating to something greater than a faceless, money-generating regime. There is a vision that resonates with the individuals endorsing TOMS and the story TOMS brings.

Other projects Blake Mycoskie is also developing is involvement in disaster relief.

“We’re really into sustainable giving, but we want to get into disaster relief as a midterm goal. There is no end goal because we are always trying to catch up to ourselves.”

The challenge with disaster relief is the fact that it tends to be acute in nature and enormous in scale, which does not match up with the gradual and steady rate that sustainable giving provides. Regardless, the TOMS group continues to trek on and pursue a system that will allow them to aid in disaster relief in the nearby future.

In addition to Mycoskie’s several developing projects and his newly published inspirational read “Start Something That Matters,” TOMS is interested in aiding shoeless children in Ethiopia who have developed lymphatic diseases from the silica found in the soil of that particular region. According to Mycoskie, “TOMS is funding clinics to treat this disease.”

Aligned with the growing success of TOMS is the vision and morality they emphasize to stay original.

“If you want to start a philanthropic service, don’t just ask for donations, people will get donation fatigue because they will not actually see where their money is going towards. Take your supporters to those rural villages and have them experience the cause they are helping. Get involved in something that brings you significance and brings the world some good.”