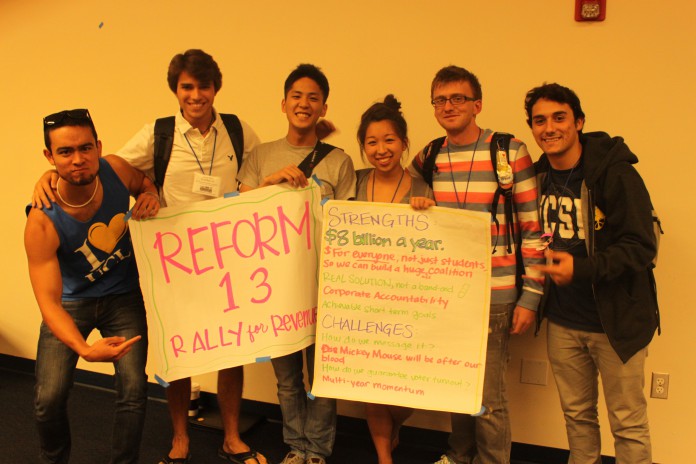 “I think it’s a really effective start to the student movement to save public education,” stated UC Santa Barbara’s Associated Students External Vice-President of Statewide Affairs (EVPSA)
Ahmed Mostafa, a fourth-year political science major. “UCSA is the only officially recognized representative of UC students by the UC Regents, as well as the California State Legislature.”

According to Mostafa’s Chief of Staff, second-year economics and accounting major, Jack Gaylord, UCSB brought the second largest delegation to the UCSA Congress with 64 students.

“This year I loved how we brought almost everyone that applied,” said Gaylord.

From August 18-21, UC students attended congress clinics, workshops and presentations that promoted grassroots organizing and strategizing, as well as information on the structure and
future of public higher education in California.

“I now feel that I have the tools and resources to come back to my campus and enact change,” said Rahel Zeleke, a second-year global studies major.

With a 17.6 percent increase in student tuition beginning this fall quarter, the UCSA Congress wanted delegates to create a campaign that addressed the budget crisis in the UC and state system. UCSA also wanted to create a secondary strategy that would focus on an issue specifically affecting UC undergraduates.

On the final day, student delegates from each UC campus delegation voted on which of the final six budget and undergraduate campaigns UCSA would give its full support and resources to.

The three budget campaigns voted on were reforming Proposition 13 which would raise $3 billion to $8 billion annually for state revenue, an oil severance tax which would tax oil companies in California and raise $3 billion specifically for public education use K-20 or reform
the payment of pensions for UC employees which are currently not paid for by the state.

The UC pension plan was eliminated in the first round of voting. However, a 60 percent voter majority was not reached in the second round amongst the final two campaigns and the UCSA
Board of Directors, which has four voting members from UCSB, had to make a final decision. In the end, UCSA made Proposition 13: Rally for Revenue its primary budget campaign, while still
making the Oil Severance Tax a priority campaign under it.

“I believe students are hesitant about the fact that the campaign chosen to reform Proposition 13 doesn’t guarantee money for the educational system,” said Norma Orozco, a second-year
global studies major and Residential Life Delegate for the EVPSA office. “[However] as it was mentioned at congress we can’t fight for a piece of cake when there’s none there to begin with.”

For the undergraduate campaign, it came down to the Holistic Opportunity Promoting Equality (HOPE) campaign, a voter registration reform within the UC system or UC Regent reform.

The UC Regent reform campaign, which called for a California state constitution amendment that would allow a student regent from each UC campus to sit on the Board of Regents, was eliminated in the first round of voting.

The second round of voting sought a 60 percent voter majority for either the HOPE campaign, which calls for comprehensive institutional financial aid and access for students in the UC
system, or an increase in UCSA and UC student efforts to register more student voters on their UC campuses.

Since neither campaign reached a 60 percent voter majority the second time, the UCSA Board of Directors voted to make both HOPE and UC Voter Registration Reform equally prioritized undergraduate campaigns for the upcoming year.

“While I love that voter registration was seriously talked about, that campaign was not what was best for UCSB because it did not bring any new ideas or substantial resources from UCSA to our campus,” said Brady Forrest, a fourth-year global and international studies major and Director of Visibility and Outreach for the AS Office of the President.

Ultimately, UCSB students left the UCSA Congress with a renewed sense of hope and enthusiasm in creating change and social movements on campus.

“It’s instilled in me a greater desire to stand up for my rights as a student and lobby for the rights of all students,” said Zeleke.

“We must all be united if we want to see solid change,” added Orozco. “No movement has been without action, and we need the people and students now more than ever.”