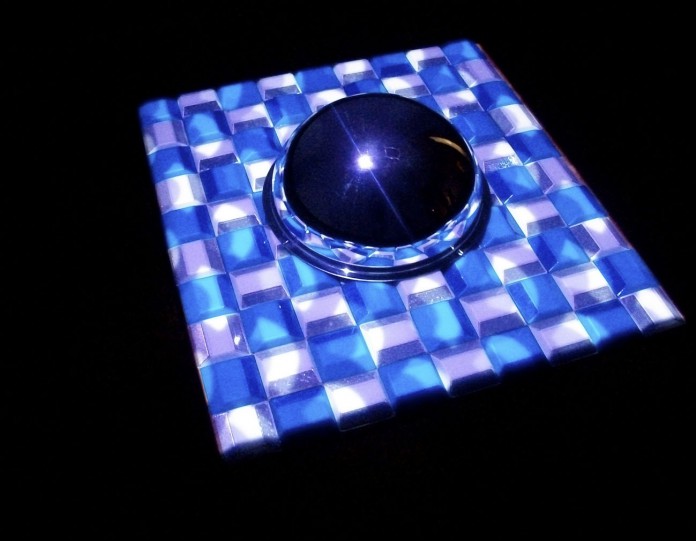 Vacuums, destroyed Tiki, human hair—these are some of the mediums that University of California, Santa Barbara’s Master of Fine Arts first-year students used for their unconventional pieces in the “Yummier/Brainsickly” exhibition. The mediums mirror the overall atmosphere of the opening reception: chaotic yet cohesive.

“The title of the show, ‘Yummier/Brainsickly,’ came from the fact that there was no unifying theme,” said Bessie Kunath, an MFA artist featured in the show. “I guess if there was a theme, it would be ‘collectivity’ and ‘randomness’. And, in consideration of the show title, the content of the exhibition would reveal themes of allure, attraction, comfort, pleasure, abjectness, discomfort, confusion, anxiety as well as psychological and physical deconstruction.”

During the opening reception, the main room of the show featured a table with various foods, including plates of Jell-O molded in the shapes of heads, as well as musical performances to accompany the art viewing. Artist Jae Hee Lee performed “This Land is Your Land” at the opening of the reception.

“Jae is a South Korean immigrant and a naturalized citizen of the U.S. and is fascinated with her adopted country,” said Tim Brown, an artist featured in the exhibition. “To hear Jae sing the song brings another dimension to it…It’s really touching to me.”

The music continued in a smaller room. Rimas Simaitis performed two pieces using the eccentric instruments of vacuums and blenders.

“I have a blender that plays the congas. I have [also] wired together six vacuum cleaners to a circuit that allows me to control the voltage of each vacuum and turn them on and off individually so that I can play them as an instrument,” said Simaitis.

Simaitis has a background playing in various rock bands when living in both Montana and Oregon, but was drawn to art after paying his bills with a day job at the Yellowstone Art Museum.

“I had the opportunity to meet and work with a lot of professional, working artists, and it was a lot of fun. I decided it would be a lot more fun to be an artist, so I quit my job at the museum, and I started building my portfolio,” said Simaitis.

A large piece entitled “Get Over It” was placed in the center of the main room. The artist, Emily Halbardier, compiled countless different materials to create a flurry of bright colors and objects.

“My piece ‘Get Over It’ deals with ideas of enlightenment, healing, drug experiences and nature. It was created as a response to feelings of being overwhelmed by all the material objects that seem to surround me and weigh me down,” said Halbardier. “I was tired of making work that didn’t mean anything to myself or anyone else. So I decided to get rid of everything and start over, as a sort of cleansing act or ritual.”

Halbardier explained that each material she used to construct the piece held a special significance regarding the emotional epiphany that let to its conception—the objects she used include random items she collected from thrift stores, neon spray paint, and even her own hair. Halbardier spoke of another important aspect of the piece: a profile of a mountain.

“The five peaks refer to the melting points of five different elements: sugar, salt, sand, LSD, and THC,” said Halbardier. “I chose those materials based on an LSD experience I had recently; the whole beach melted into the sky as I was eating the juiciest little tangerines I had ever tasted. I wanted the surface of the mountain to relate to that feeling of everything coming together and melting, moving, changing.”

Another artist in the show, Nick Loewen, also focused on the theme of rebirth.

“‘Birthmarks,’ my installation in the exhibition, is a large scale work consisting of plastic bags, latex balloons, spray foam, thread, nails, wood, canvas, latex paint, LEDs, and a plastic bucket,” said Loewen. “It’s about the growing and mutating of objects…I work with the idea of production as both a material and biological phenomenon. In an effort to bring relevancy to the aesthetic, I choose materials related to industry and modern trends. Through these forms, the possibility for new birth merges with a re-examination of overproduction and material refinement.”

The thought behind each artist’s work allowed for beautiful expressions of profound, strong feeling that no other outlet could so vividly show.

The exhibition runs until Wednesday, May 11 in Building 479.