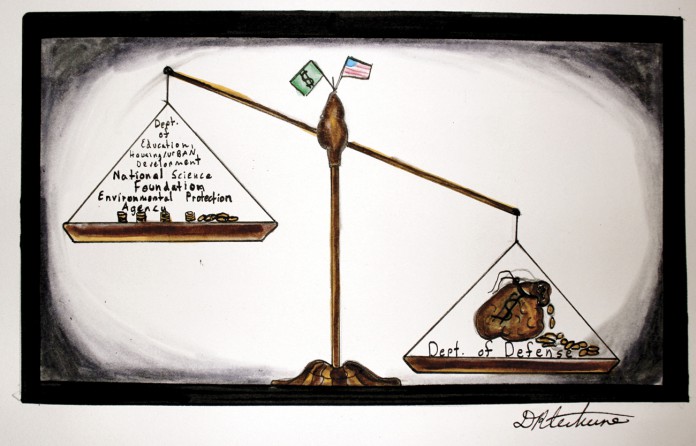 On March 19, I attended a “Wake-Up Call Rally” in downtown Santa Barbara and marched down State Street bellowing, “Money for schools, not for war!” with students, campus workers, World War II veterans and professors. This protest was part of a global protest to end the war, and included many cities in the United States, as well as Brussels and Porto Alegre in Brazil. March 19 was the day the Iraq war began in 2003. This protest also coincided with the day the Pentagon began “Operation: Odyssey Dawn,” the military engagement with Libya to reinforce a no-fly zone on the grounds of protecting civilians.

I remember wondering at the rally, are we in yet another war? The issue of whether or not we are in war is not clear. We are deploying troops and engaging in combat with Libya, but without a formal declaration of war, this is only military engagement. Military engagement has its own set of rules as defined by the War Powers Resolution, such as a limit on how many soldiers can be deployed and for how long. Such action requires congressional authorization, except when war is formally declared or during a national emergency. Obama did not have congressional authority to order U.S. military to attack Libyan government forces.

By the way, both the Vietnam War and the Iraq War received authorization from Congress.

So, Operation: Odyssey Dawn is not an official war, nor is it an authorized military campaign. But I am not interested in the legality or constitutionality of this war as my primary focus. We can argue back and forth about obligations to protect civilians versus unjustified military involvement. I am instead pointing out the legal and moral ambiguity regarding this operation to focus on the flip-side of war: anti-war.

The anti-war movement was a pivotal part of modern America during the Vietnam War and after September 11, 2011. In Santa Barbara, 5,000 people marched in the streets in 2003 to protest the Iraq War, according to The Santa Barbara Independent. The majority of participants were veterans and older folk who had been trying to turn the government’s focus away from foreign campaigns toward domestic and economic concerns.

Mary Johnston, the Vice President of the Veterans for Peace Chapter 54 in Santa Barbara, believes that there is still an anti-war sentiment in our society.

“However, it [anti-war sentiment] is a very small one, and does not have nearly the impact that it had during the Vietnam War. Times are different now than in that era, and people don’t feel as strongly about our country’s endeavors abroad,” Johnston said.

She also said that reasons for this could be due to the framing of the issues by political parties and their supporters, such as “we have to protect the homeland from the 9/11 terrorists,” therefore our invasions are justified.

Dyne Suh, President of Campus Left, agrees that times are different, but emphasizes the morality of the U.S. military support of the democratic uprisings in Libya.

“If the U.S. government did not intervene, it would have also faced attacks for disregarding the African people again after turning a blind eye from other disasters. If we presuppose that the U.S. government is a slave to capitalism rather than the manifestation of the public’s will, then it is easy to assume that every endeavor the U.S. undertakes is corrupt and conniving,” said Suh.

He added that if people view the government as something that can serve other purposes other than the will of the Capitol, then it might be more believable that the U.S. government did something moral for once.

In one of my classes, a student was asked whether he agreed with or opposed intervention in Libya. He very confidently and casually responded, “I agree with it because we have to protect the civilians.”

These sentiments are valid, as our nation is one built upon ideals of democracy and human emancipation. But I wonder if we may be overextending our resources. We have all seen many local businesses close. And we are all familiar with UC budget cuts. Some of our families are undergoing economic difficulties, foreclosures, or business failures. These are reasons why the foci of the protest were domestic and economic issues. Then the question becomes, does the American military intervention justify the cost to U.S. taxpayers?

A couple months ago, the U.S. was facing a government shutdown, and $38.5 billion in spending was cut from the 2011 Federal Budget—including cuts to the Department of Housing and Urban Development, The National Science Foundation, The Department of Education, and The Environmental Protection Agency and many others. According to PBS.org, the Department of Defense is receiving an increase of $5 billion, making the Pentagon one of the few agencies receiving a boost.

So what does anti-war even mean these days? It means focusing on education, creating jobs, paying into Social Security, funding health care, supporting veterans, and fighting for human rights first.