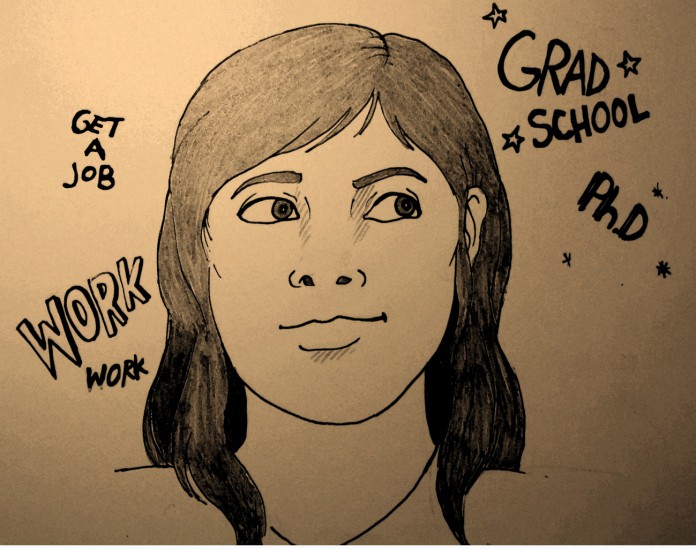 I look at graduate school and don‘t quite see it being effort I want to spend. Grad school may make you more educated, but it can be detrimental as well.

I see grad school as a kind of gauntlet of emotional trials; it has the effect of making one weary of life. Through friends of mine that live with grad students, I’ve been given an inside look into the toll grad school takes on people. To start, many of the grad students I know aren’t overly enthused to still be in school. The grad students would commiserate, discussing how grad school had kept them from forming a family, from seeing the world, from getting a real job and from having any sense of permanence. At the same time, because they had invested so much of their time, effort and money into the pursuit of their degree, it was hard to bear the thought that maybe they had made a wrong choice.

This just reiterates the idea of the academic system as a system that one lives by – to the point where it seems like they’ll never escape the school system.

Another misgiving that has influenced my decision is that grad school curriculum is often overshadowed by departmental politics. It’s a common feeling that sucking up toward superiors is oftentimes of near equal importance to one’s research and classes. Also, we’ve all seen some T.A.s that are just beyond caring. The strain of trying to balance an advanced curriculum with a job and other responsibilities can prove to be too much for many grad students.

And then there is the cost.

Via gradschool.about.com, according to Tara Kuther, Ph. D., a Western Connecticut State University professor, the average grad student owes around $30,000 in loans for a master’s degree on top of other outstanding loans that one has accrued. She may not be a UCSB professor, but the grad school experience is similar across the board.
Grad school is not just a drain on finances, but also on one’s existence as a social creature. One grad student I talked to wished to remain anonymous out of fear of stigmatism from his department and his peers if his complaints were to be read. The interview reconfirmed the main detractors of grad school, with his first concern being that grad school stunts one’s social life and numbs one’s social skills. He cited the classic idiom about how between sleep, grades, and fun, you can only have two of the three.

“I don’t have time to make any new friends,” he said. “I’m so devoted to studying and doing my graduate work that my departmental peers are my friends and we’re all stuck being friends whether we like it or not.”

He said it had a strange effect on his self-image by making him feel like a permanent student.

Lastly, he implied that grad school, although not intended to be, was designed without considering the real life impact of its academic rigors.

“We’re all taught to be analytical and we have to analyze a bunch of material every day, so when we’re not doing that we end up analyzing ourselves and question everything we do or have done.”

Graduate school has its place but it’s nowhere near perfect. It’s helpful if you want to pursue an academic career, but many grad students will tell you that it’s better to not go if unless you are interested in teaching or have a highly academic or technical career in mind. It may give you a higher paying job, but the pressures and competition just get fiercer the higher up you try to ascend. It just seems like the pursuit of higher education shouldn’t come at such a high cost and with so many trivial quibbles.