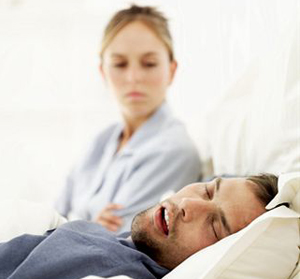 There’s nothing worse than when you’re lying cozily in bed, eyes wilting, ready to drift off to dreamland, when a sound like a dying hog begins to resonate around the room. You can try to stuff a pillow over your ears or put on some headphones, but in the end, your nice, peaceful attempt at sleep has had an annoying roadblock.

There is nothing worse than He or She Who Snores.

Unfortunately, I’ve had plenty of experience in this area. My boyfriend is an all-time champ at snoring, and there have been many nights I’ve had to kick, punch, or bite to get him to stop shaking the walls with the noise that emerges from his mouth and nose region.

Luckily, I’m a very deep sleeper who falls asleep easily, so my boyfriend’s obnoxious nocturnal noises don’t bother me too much. But, much like many young women who live in the college town of Isla Vista, CA, I have a roommate. My roommate happens to be the type of sleeper who is extremely picky about her surroundings and can’t fall asleep if there’s the least bit of noise in the room.

Suffice it to say, this was not good news.

On the nights my boyfriend was in town, my roommate complained to me about his snoring. There were nights she would get up and go sleep in the living room, or nights when she would complain about hardly getting any sleep. Of course, this led to both my boyfriend and I feeling extremely guilty and miserable because we hate being inconsiderate.

The next step? Search for a solution to the problem.

“In children, usually it’s caused by [enlarged] tonsils and adenoids,” she said. “As patients grow older, the elasticity of the muscles in the neck relaxes, and the muscle tissue collapses into the throat…the airway is closed and the patient is struggling for breath.”

According to a study released by the National Sleep Foundation, an estimated 63 percent of college students do not get enough sleep at night.

“Young adults who sleep poorly or who do not get enough sleep are at risk for problems such as difficulties with focused attention and memory, depressed moods, problems with peer and adult relationships, as well as injuries and accidents,” said Johnston. “A major reason students do not get enough sleep is for extra study time, but the more sleep you get, the more efficient your study time will be.”

According to a report from the Centers for Disease Control and Prevention, among 74,571 adult respondents in 12 states, about 35 percent reported getting less than seven hours of sleep on average during a 24-hour period, 48 percent reported snoring, and about 38 percent reported unintentionally falling asleep during the day at least one day in the preceding 30 days.

But there is a big difference between the annoyance of regular “snoring” and a condition called “sleep apnea.” Simple snoring is a minimal disruption of airflow; it annoys other people in the bedroom but is not a serious health risk. There are a variety of over-the-counter methods to cease snoring, including nose strips, aromatherapy, and anti-snore pillows.

Currently, there are even “anti-snore t-shirts” on the market. Pockets are sewn onto the back of a t-shirt, and the snorer is actually supposed to place tennis balls in these pockets so that they will have an uncomfortable awakening if they try to flip on their back.

In our case, I discovered that having my boyfriend sleep on his side is the best solution for him. Breathing strips did absolutely nothing for him, but when he started sleeping on his side, the snoring went away.

A couple of months after my boyfriend solved his snoring problem, my roommate got her own boyfriend, who began to sleep over every other night. Let’s just say this guy can give my boyfriend a run for his money in the snoring department. I discovered that when it’s not your boyfriend who’s at fault, the annoyance of snoring is a million times worse.

I immediately informed him that he should sleep on his side. That was fine—when it worked. Unfortunately, my roommate’s boyfriend has a tendency to fall asleep on his side and then immediately turn over onto his back and start snoring yet again. Many a night passed where I lay awake, launching pillows, books, stuffed animals, and any object within reach at his face, but to no avail. The problem only got worse on the weekends, because after a night of heavy drinking, his snoring was twice as loud and he cared twice as less. Maybe I should buy him one of those tennis ball shirts…

I began to get very angry at night. I became snappy at my roommate and her boyfriend, and tried to avoid them as much as possible. Now, I’ve just gotten into the habit of sleeping on the couch every time he stays over just to avoid raising my temper. For me, this one problem of snoring has greatly affected the relationship between my roommate and me, even though we used to be close friends.

On the other hand, sleep apnea is much more dangerous compared to regular snoring. With sleep apnea, a person’s throat is so badly blocked that they are actually being deprived of oxygen, and often stop breathing during the night. This happens because not enough air flows into the lungs through the mouth and nose when a person tries to breathe. Pauses in breathing can last 10-20 seconds and occur 20-30 times an hour. To experience this feeling for yourself, try holding your breath for 20 seconds, then imagine doing this at least 20 times during your sleep, with your heart reacting to an adrenaline wake-up jolt several times throughout the night.

“The body goes into emergency mode and the body gives you a burst of adrenaline to tell you to wake up,” said Johnston. “When you stop breathing, it’s a big strain on your heart, so people with cardiac problems should address [this condition] right away.”

According to “Snoring and How it Relates to Sleep Apnea” by Dr. Mark T. Weiser, additional problems resulting from sleep apnea include obesity, high blood pressure, diabetes, heart attack and stroke, impotence, accidents, daytime sleepiness, and many others. There are also various predictors of sleep apnea, including a large neck, overbite, decreased sex drive, poor concentration or memory, increased cholesterol, depression, and hypertension.

Many people do not realize that they have sleep apnea. According to the American Academy of Dental Sleep Medicine, an estimated 18 million people have sleep apnea, but 80-90 percent of those people remain untreated.

While simple snoring can be treated with over-the-counter solutions, those with sleep apnea have only three options to revert to: CPAPs, surgery, or an oral appliance. A CPAP looks like a mask that a person wears over their nose that forces moist air into the nostrils, whereas an oral appliance looks vaguely like a retainer and sits solely inside the mouth, moving the jaw forward.

Like with simple snoring, several sufferers of sleep apnea find that the condition affects their relationships negatively.

Johnson spoke of an older male who had sleep apnea and chose to use a CPAP. But this man met a woman he wanted to travel with and he didn’t want her to know about his condition. So, he opted to buy one of the oral appliances to hide his condition from his partner.

He isn’t the only one negatively affected either. Snoring and sleep apnea can even endanger the lives of partners of those with the conditions.

“I have one gentleman who, after three years of marriage, [he and his wife] had to get separate bedrooms because the snoring was disturbing his wife’s sleep so much that she actually got into a car accident,” said Magdalena Sunshine Serrano, M.S.W., a clinical social worker at American Indian Health & Services.

“She wasn’t sleeping deeply, she was a commuter, and she got in a car accident; she fell asleep at the wheel.”

Serrano recommended that the couple adopt “pre-bed” rituals to help their situation.

“If they go for walks before bed, it helps him with his weight loss, and it helps her to get out that energy and help her relax,” she said.

Johnson also recommended that weight loss can be helpful to reverse snoring and that sleep hygiene, including not drinking alcohol before bed (it relaxes the throat even more than usual), making sure the television is off, and creating a calming environment, can aid as well.

Snoring can cause angry, sleepless nights and ruin relationships. Even worse, sleep apnea can do all of the above and endanger lives. For the sake of relationships and overall health, it is important to understand sleeping behavior and address a problem involving sleep apnea or snoring by finding solutions that feel comfortable.