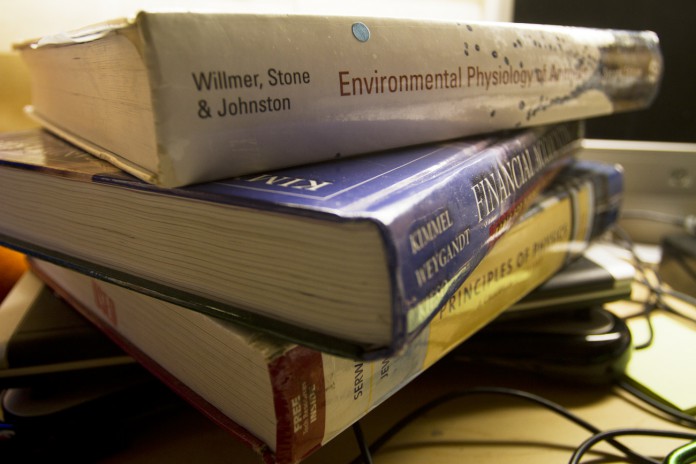 Textbook prices are the cherry on top of college fees. While the reassurance of being able to sell books back to University of California, Santa Barbara’s bookstore may soothe some of the pain of the wallet damage, in many cases selling a book back only returns small amounts of money to students, if the bookstore accepts the books at all.

“I was really upset because [the UCSB bookstore] wouldn’t accept the one book that Anthropology 2 always uses, and it was in perfect condition!” said Jasmin Badrian, an undeclared first-year student. “And when I sold a book that was like 66 [dollars], I only got 15 back.”

Understandably, both the Isla Vista Bookstore and the UCSB Bookstore will not buy back a textbook if a class is not using it during the following quarter. But it doesn’t make sense when they decide not to buy books from students that they would normally be able to sell, even if they are in good condition.

But some professors make extra efforts to help students spend less on textbooks initially. Psychology professor Stan Klein understands students’ textbook financial struggles and does his best to keep the prices of the books he requires as low as possible without compromising the quality of the text.

“I try to order texts that are customized,” said Klein. “For me, this entails removing a few chapters that I would not be covering anyway and making the book soft-cover. This usually brings down the price by 40-60 dollars. Also, I try to use them more than one [quarter] so they have resale value. In that way, students can sell to the IV and UCSB bookstore at half the market price. So, by the time they are done, if all goes well, the 140 dollar text may in its original, uncustomized form, [cost] 40 dollars.”

Ellie Grano, this quarter’s instructor of Math 34A (Calculus), like Klein, uses a book with similar qualities that allows her students to save more money.

“I like [the textbook I use] because it is paperback, not too expensive, and because only one version has been published, making it easier to find a used copy,” said Grano.

Klein explained that new textbook prices generally stay high because the publisher tends to only garner profits from its books during their first year of publication—after that, most students look to buy used copies instead of new ones, so ironically, the prices of new books need to rise in order to compensate for the loss of sales.
“The publisher is not out to gouge the student. It is a vicious spiral of lost funds on the part of both student and publisher…Ultimately, texts will all be on-line. This will remove the used market and perhaps costs will come down,” said Klein.

Many students have found that the best way to make money off of textbooks is to sell them directly to other students at the end of the quarter instead of selling them to either bookstore.

“I try to see if the professor has the book on reserve at the library first, and if that fails then I ask my friends to see if they have taken the class,” says second-year Environmental Studies major Cedric Zhao. “Usually my friends don’t bother selling the books because of the lack of monetary return.”

If you don’t have many friends who are in your major, then try looking up websites that connect students with similar goals, ultimately, to sell textbooks for more money.

“I buy my books on Amazon; I always save money by shopping around and buying used,” said second-year History of Public Policy major Danielle Birresborn.

Uloop.com, chegg.com and slugbooks.com are also good websites to sell, buy, or rent books from at lower prices than at local textbook stores.