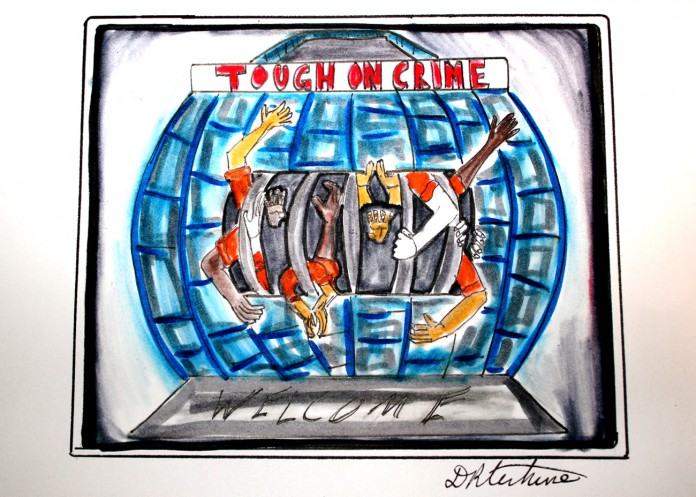 The incarceration of human beings for profit is unethical. Private prisons are jails or detention centers where individuals are confined by a third party that has been contracted by local, state, or federal government agencies. Unethical, baseless and hypocritical justifications that threaten the legitimacy of our criminal justice system allow private “security firms” to incarcerate prisoners from the state and house them on a per diem or monthly rate.
The intention of our prison system is to remove dangerous people from society and rehabilitate them so they can return to society. The object of any corporation is to maximize their profits and to accomplish this, and “security firms” must ensure that a large prison population exists. If private prisons successfully rehabilitated large numbers of prisoners, their supply of “customers” would diminish, resulting in decreased profits. Thus, the purpose of our prison system lies contradictory to that of the private system, establishing an unjust conflict of interest.
Private prison “security firms” have dedicated vast resources to lobbying and influencing state and federal legislative bodies to enact legislation that is “tough on crime.” The enactment of “tough on crime” legislation and the increased levels of punishment allow private prisons to increase their supply of prisoners, which consequently increases their profits. Thus, the profit-generating purpose of these companies allows for the potential manipulation of the legal system as companies profit from and advocate for unnecessarily severe laws and unethical sentencing.

Proponents of the privatization of prisons argue that profits encourage efficiency, lower costs and allocate state resources more effectively than public prisons. But this argument is contradicted by a 2001 study from the Bureau of Justice Assistance of the U.S. National Council on Crime and Delinquency that stipulated “there [is] no data to support the contention that privately operated facilities offer cost savings over publicly managed facilities.”
Furthermore, a 2009 study confirmed the Bureau’s conclusion and found that it costs private prisons about 35.39 dollars per day to house one prisoner, compared to 34.90 dollars for the public prison. This data falsifies the central premise utilized by advocates for private prisons and dismisses their claim.
George Washington University has also conducted studies which have found that there are 49 percent more inmates-on-staff assaults and 65 percent more inmates-on-inmate assaults occurring in private prisons than in public prisons; thus both violence levels among inmates and assaults on private prison guards are considerably higher in private prisons. Therefore, the operation of private prisons has shown to be a detriment to the security of the prison inmates, prison employees, and society.

The criminal justice system is flawed, and until we take action to abolish private prisons it will continue to either stay the same or problematically increase. For more information, “like” a page on Facebook called “Profiting from Punishment: Why We Must Abolish Private Prisons.” Read the articles posted, and help end injustice!