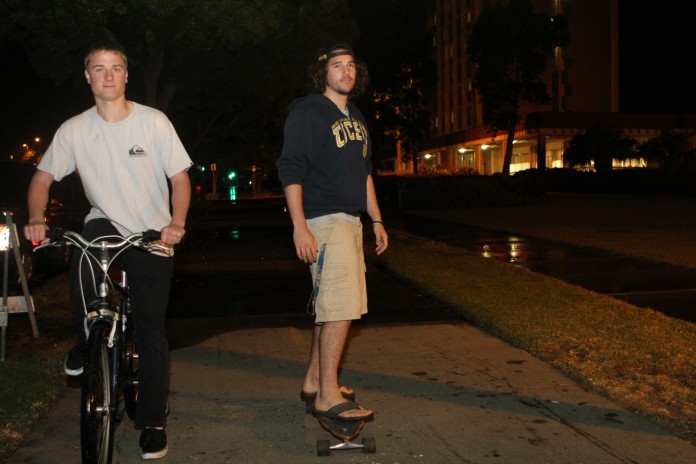 Four years, four bikes? Try two days, two bikes. As a freshman, the only thing that I used my first pink beach cruiser for was to get into a bike crash, that is, before it was stolen. This particular crash was a head-on collision and was a result of a classic freshman who does not know how to steer drifting over into the opposing lane. This was clearly a stupid mistake, but bike crashes at University of California, Santa Barbara are certainly not uncommon.

On campus, bike mishaps tend to happen daily, but are not very treacherous most of the time. But while roundabouts may have once seemed like circles of death, imagine if there were moving vehicles, skateboards, and no bike paths whatsoever.

Rachel Valdez, a second-year double major in Pre-Biology and Spanish found herself in quite the accident at the four-way intersection on Pardall by Freebirds. Her collision was with a skateboarder.

“A skateboarder wasn’t paying attention and was skating perpendicular to bikes coming toward him from campus. I had to hit my brakes, and I ended up slipping and sliding into the intersection,” she said.
According to the UC police legal code for biking violations, “Skateboarders, in-line rollerskaters and rollerskaters shall be considered pedestrians. Skateboards, in-line rollerskaters and rollerskaters shall not be ridden on roadways and bikeway.” Skateboarders can contribute to the cause of an accident, but there are not always sidewalks for the skaters to ride on, forcing them to ride in the street.
Luckily for Valdez, there were no cars involved as she came away from the accident with only a few scrapes and ripped clothing.

“My bike was fine,” she said. “Embarrassment was at the max, however.”
Anyone who has been involved in a bike accident is well aware that embarrassment is nearly inevitable.

Erin Brown, a second-year Psychology major, recounted her involvement in a crash.

“I was biking towards Pardall on Camino Pescadero when a man opened his car door. The car was only a few feet away, so I did not even have time to use my breaks. Needless to say, I crashed into the interior of his car door, and another biker hit me from behind,” she said.

Chain reactions such as these end up with even more serious consequences. Brown and the second biker ended up going to the emergency room and were prescribed painkillers. Brown also had a bruised sternum.

Like Brown, Juliet Mariniello, a second-year Political Science major, was prescribed Vicodin after her bike accident.

“I was biking and turned left at the roundabout by the [Student Resource Building] while the person behind me continued biking straight. Unfortunately, the guy crashed into me, upon which I flipped off my bike in an all too common bike crash scene.”

Mariniello was diagnosed with a hematoma (a pooling of blood under the skin, such as bruising).

If UCSB is full of incredibly smart people, how do these completely avoidable accidents keep happening?

A simple thing called “bike etiquette” may need to be enforced.

“Bikers, I know that stopping at a stop sign is not a realistic request, but try and slow down or at least look before you fly through an intersection,” said Brown.

While that may seem simple, oftentimes people are in such a rush to get to where they need to go that they simply forget about the rules of the road. Biking is certainly not the same thing as driving, but a lot of legal citations are the same for both modes of transportation. For example, a person could be ticketed for not stopping at a stop sign in a car and on a bike.

“No skateboarders should be on the bike path,” she said. “And don’t stop suddenly.”

“I think people should be alert on the bike path: no more of that ‘riding-cruisers-with-four-of-your-best-friends-so-that-nobody-can-pass-you’ thing. Texting is unadvisable, and make sure you learn to bike straight before making phone calls after Pardall,” she said.

For those of us in Isla Vista who have been involved in a crash, the old saying, “It’s just like riding a bike!” may not be so encouraging after all.