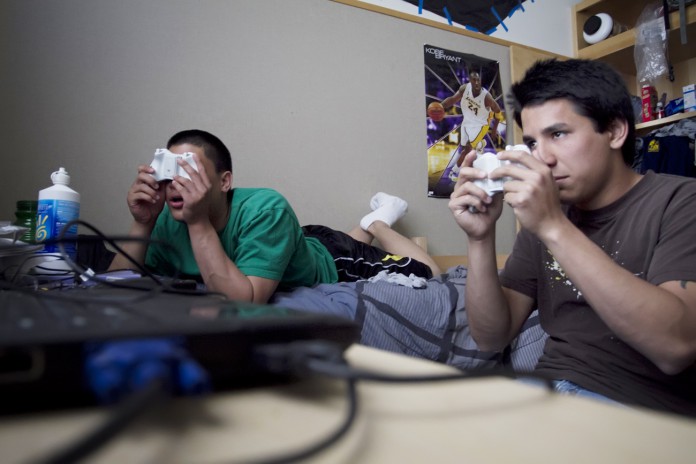 A recent trend in the video game craze has been taking a look at the impact of gaming on health and fitness. With the rise of games specifically designed for weight loss, fitness, and health education such as the Wii fit, Wii sports, and Kinect, the video game industry seems to be focusing on making their consumers healthier rather than just purely aiming to entertain. But before the rise of these fitness-based games, video games had been previously associated with negative health behaviors, such as overeating, forgetting to eat, skimping on exercise, and even not leaving the house or neglecting basic hygiene.

A recent Canadian-led study published in the American Journal of Clinical Nutrition showed that video games can lead their enthusiasts to unconsciously eating more after playing them. Participants in the study were asked to spend either an hour just sitting in a comfortable chair or sitting down playing video games. After gaming, the study’s teenage participants went to an organized pasta lunch. There, gamers consumed an average 80 calories more than the participants who merely sat in a chair for an hour.

Another study done by researchers at the Center for Disease Control and Prevention correlated that, on average, female gamers were more depressed and of poorer health status than female non-gamers. Male gamers had higher Body Mass Indexes than male non-gamers. The information reflected in these studies does not deconstruct one of the stereotypically held images of gamers as Cheetos-consuming couch potatoes who get
up solely to buy the newest game from GameStop and continue their happily self-destructive playing.

“People have ‘gamer snacks,’ because apparently when we’re gaming we’re eating differently than normal people; they have these silly cheetos mixes and stuff like that,” said gaming aficionado and UCSB graduate student Thomas Hurst.“I mean, there are definitely a lot of people who munch on chips and pound Dr. Pepper. I would wager that those are the same people who are eating chips and drinking Dr.Pepper when they’re watching TV or doing anything at all.”

However, there is also another stereotypical constituency of wiry gamers who say they forget to eat while spending long hours gaming.

“If I’m playing a good game, I’ve gone like 8 hours without eating or doing anything else,” said Hurst.

Most gamers do not fall into the exaggerated and marginalized stereotypes of
inordinately fat or rail-thin body types. But if gamers engage in overeating or skipping meals, their behavior is considered unhealthy and may potentially lead to other
health problems down the line.

On the other end of the spectrum, weight loss is a benefit potentially available to many exercise-related game players. A recent Mayo Clinic-led study published in Pediatrics showed that many children burned more than three times as many calories playing “active” video games versus “traditional” video games.

“I think the newer generation has a different perception of what gaming is and how it will affect health because we have the new technologies on a personal level that are becoming more available,” said Hurst.

Unless you are playing a video game created for “edutainment” or fitness promotion, a consciously active restriction of unhealthy behaviors or a limitation on gameplay should be considered. Even though it’s not necessary to stop gaming entirely, planning to engage in healthier behaviors, such as putting out healthier food to munch or actively counting the calories consumed in a day may be instrumental in helping gamers who want to get fit achieve their health goals.

If you’re interested in getting involved in playing games that will keep you fit, look to games such as Wii Fit, Zumba Fitness, or EA Sports Active 2 Personal Trainer.