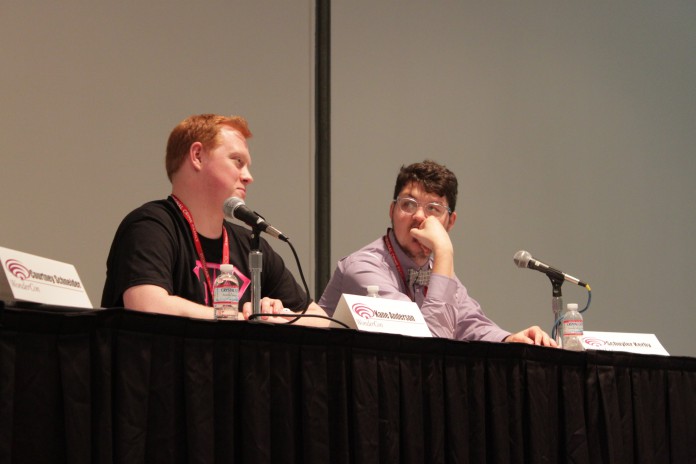 The panel was compromised of second-year undergraduate from the School of Art Institute of Chicago Courtney Shneider, graduate student from the University of Central Florida Schulyer Kerby and Kane Anderson, Ph.D. Candidate from UCSB. These three individuals presented their research that briefly reflected the over arching theme of the panel-Gender and Queer Spaces. Schneider discussed the mainstreaming of queer relationships in graphic novels, and Kerby discussed queer spaces in Neil Gaimen’s The Doll’s House.

As a Ph.D. candidate under the Theater Department, Anderson’s discussion was not merely a sit-down panel-he performed his dissertation. It featured an academic discussion on the gay super-hero costumes, particularly paying close attention to gay male performance in these spaces. At one point during the presentation, he ripped off his suit to show his “Super-Gay” t-shirt, a spoof on the classic iconography of Superman.

The open discussion between fans and scholars as communities in the larger subculture of comic book “fandom” created a unique setting at this year’s WonderCon.

“I love being at this place [WonderCon]. It’s a unique environment where scholars and fans can engage in an open dialogue,” said Anderson about the experience presenting at WonderCon 2011.

“I study pop culture, which isn’t always looked upon as a topic of interest [from academia],” Anderson said about his research.

Women’s Soccer Seniors Reflect On Their Journeys as Athletes