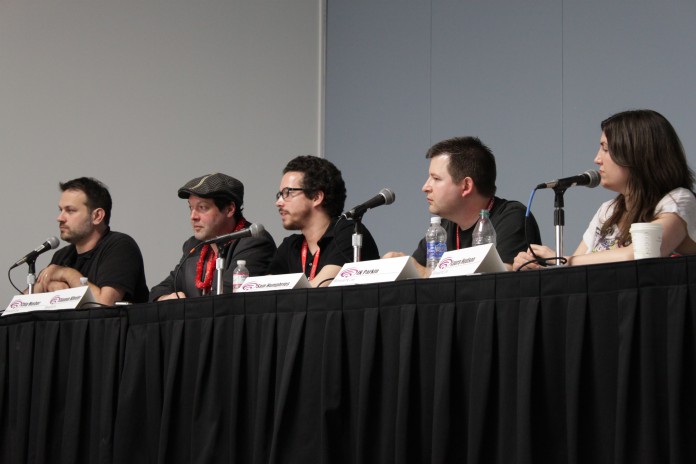 The current economy hasn’t been very forgiving for budding comic artists. Whether you have designed a print version of the greatest graphic novel since Watchmen or a clever web comic in the similar vein of xkcd, the current economic situation offers unique possibilities for comic artists to market their work. Don’t worry, Gaucho, you’ll still be able to be the next big thing. Take the following advice and, hopefully, comic success will be knocking on your proverbial door.

Marketing director of BOOM! Studios, Chip Mosher gave the following advice for individuals who want to market their comic in an independent way.

“ There are three things to know about making it,” Mosher said as he spoke at the 2011 Wondercon panel on “Indy Marketing 101.” “The first is to be aggressive. You need to figure out the difference between being agressive and being a douche.”

According to Mosher, most new indy comic artists are not being aggressive enough when marketing their comic.

“When you’re think you’re being too aggressive, chances are you’re not,” he said.

According to Mosher, the artists that get selected for his publishing company have a very aggressive marketing strategy. In order to market your comic effectively, you must have more than an aggressive attitude- you have to have an aggressive marketing strategy. This means that websites such as Twitter and other social networking sites are instrumental to the success of an independent comic. However, one must be cautious as to how they market themselves on these social networking sites.

“You got to remember how you interact with places on the internet. You’re not just marketing your product, you’re also marketing yourself, ” said Laura Hudson, Editor-in-Chif of ComicsAlliance.com.

Hudson cautioned artists not to @reply the studios and other online places that they market their material too. Nothing annoys a potential marketer more than negative feedback when they don’t answer an email right away. In other words, don’t be rude, be professional, and remember that when you’re marketing your creative artwork, you’re also marketing yourself.

Mosher said the second important aspect of marketing for indy comics is to be shameless.
“Don’t be afraid to show how great your work is,” he said.

Shamelessly plugging yourself may seem awkward and rude at first, but it is the only way that individuals will know how good your work is.

Popular for his comic Too Much Coffee Man, Wheeler explained that there was nothing glamorous about promoting yourself.

“I feel shameful when I promote myself, but it is something that has to be done,” Wheeler said at the panel.

When you’re an independent comic artist, you’re going to have to show the industry that you are a hard worker and will be there to stay.

Sam Humphries, writer of Our Love Is Real, said, “You’re going to have to learn how to do all the jobs and do well at them in order to succeed.”

What worked well for Wheeler was understanding that being poor was something that he was going to have to get used to for a while.

“I was giving out my material so cheap that my profit was only covering the cost of printing charges,” he said.

Wheeler spent the early part of his career going to local shops, small bookstores, coffee houses, and anywhere else he could think of just to drop off small comics strips of his work.

“What’s important is that early on, you create relationships with these small businesses because they will promote you if they like you,” he said.

The third and final advice from Mosher is “Don’t worry about the Cool thing.”

Mosher explained that for indy comic artists, it isn’t important that you have the “coolest” story with a kick-ass super hero that rocks skinny jeans and Ray Bans, and that what’s important is that your story is interesting.

According to Hudson, what makes comics work are gimmicks. Ask yourself, “What is unique about my work? Do the profits from sales go to a charity? What is the background to the source material? Basically, what sets my work above the fold?”.

“The most interesting comics are often picked over the hippest comics,” Mosher said.

Other advice for indy comic artists in terms of marketing: