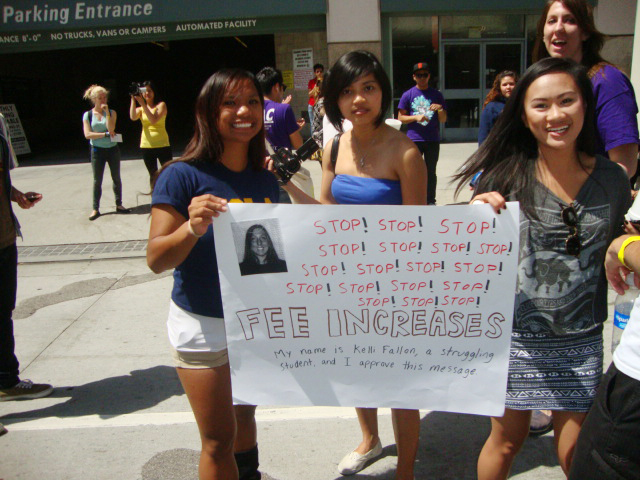 Around a hundred students gathered in front of Governor Browns’ office in Los Angeles to protest budget cuts on higher education on Thursday, April 14. The event was one of many during the National Week of Action, which focused on taking action against the continued slashing of higher education funding.

The University of California system faces an estimated 500 million budget cut, which will raise tuition but decrease the quality of education students receive. The protest also focused on the Dream Act, a bill that would award deserving students who are undocumented permanent residency. The rally was composed mainly of college students from UCLA, UC Santa Cruz and UC Santa Barbara, who were determined to let Governor Brown and other officials that cutting funding from public education was not okay.
Present were many students from UCSB Student Lobby, which had funded the transportation to the Los Angeles location.

Quinn Nguyen, a fourth year Global Studies and Political Science major voiced her frustrations. “I am a first generation college student” she said, “but with all of the increases in tuition I will probably be the last, because my younger brother won’t be able to afford college.”

The protest was characterized by the voices of college students tired of paying incredibly high tuition fees. During the rally, students took turns speaking on the stage and urging for students to step up and put an end to the devaluing of education.

Two students from UCSB also went on stage to protest the cuts. Sophia Armen, a second year Political Science and Feminist Studies major told the motivated crowd, “We are facing a one billion dollar cut. Where is our money going? Let’s be real, it’s going overseas to continue violence”.

The crowd began to protest as a whole after the speech, inspired by the words that many felt were true for themselves. They proceeded to yell chants of “Whose education? Our education!” and directed their protests toward the towering buildings above. The protestors proceeded to sign the California Students Declaration on Education, a declaration created by the protestors which advocated for the “affordability and equal access” of higher education for students.

The event also included performances from artists Trek Life, Rob Roy and Thurz. All artists performed for no cost and could relate to the cause, including Thurz, who had been a grad student at LMU and as a result understood the seriousness of budget cuts to higher education.

“[The protest] was a good cause and it’s one I support” Thurz said “Nobody should be prohibited from getting an education; budget cuts aren’t helping us gain a strong position in the world.” Many present at the rally voiced the same opinions as speakers continued to take the stage in between performances.

By the end of the event, rally leaders began passing around fliers containing contact information for Governor Brown and officials in Sacramento. The students began making mass calls to demand making education a higher priority. They also called to prevent the removal of the Pell Grant, a federal grant awarded to low income students to aid in college tuition. Without the grant, many students would find themselves not being able to pay for college.

“This has become a personal issue,” said Nguyen. “What you’re caring about is not the budget cuts, but the people who are affected by these cuts.”

All of the students speaking acknowledged this, claiming to know students who had to drop out of college because it had become impossible to pay for college tuition. The crowd cried “Shame!” at every tragedy mentioned and at the thought that even more students will be denied a college education because of the new budget cuts. The rally ended on a brighter note, with the students dancing to music played by a DJ on the Los Angeles street.

There are ways to get involved with the fight for public education. Student Lobby joins many protests advocating the prioritization of higher education; you can contact them and help. Student protesting groups are also available at ucsbcoalition@gmail.com.

Students can also help individually. “Write letters to Gov. Brown,” says Nguyen. “Tell him you want to prioritize education.” The student protestors Thursday used their voices to say just that, demanding their higher education be valued.