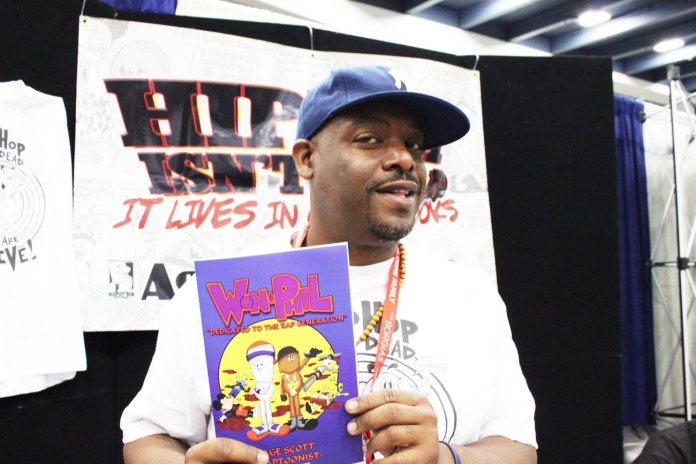 I had the privilege of stumbling upon the work of Age Scott while at WonderCon this year. I had never seen a hip-hop comic before, and I am very glad I did. I got a copy of I,Rapper/Blade Rapper, a comic part of a series that follows the adventures of Won and Phil.

I was intrigued, picked the comic up, read it on BART and knew I was reading something great.

His characters, Won and Phil, are self titled “hip-hop heroes.” Reading I,Rapper, you get the sense right away that the comic is a social commentary on the state of not just the hip-hop industry in America right now, but also race relations.

Won and Phil are fighting against rap robots (who are iconic, auto-tuned “artists”) and their adoring fans. The two are socially conscious heroes who are trying to bring hip-hop back to something other than the “wack” music that it is today.

I was able to sit down with Scott during WonderCon and talk to him about his work in making a one-of-a-kind comic.

What is your inspiration behind Won and Phil?
Age Scott: Won and Phil started off as Wonder Joint and Philly Blunt. I started drawing Wonder Joint and Philly Blunt when I was 20 years old. It was a Hip-Hop comic book, but the commentary and being consciousness wasn’t there. It was just me being young with a couple of books, having fun. The hip-hop voice was there but the consciousness wasn’t. I was making the books and selling them out of my backpack. I did this for three or four years. Low and behold, people starting liking it. I had one of my mentors tell me that [my comic] was only going to go so far with the drugs in the name.

How long have you been doing this?
My mother said I was drawing before I was talking, but I’ve been drawing professionally since I was 21.

Is this your only job?
No, I have other jobs. I work at a school from eight to two, then I come home and draw.

Are the robots supposed to represent American society in general?
Yes. If you’re a hip-hop artist or a hip-hop enthusiast, you get really excited. When I write it, I’m like “yeah!” I can hear the hand claps; that’s what the guy [robot rapper] gets.

The death of auto-tune finally!
Yeah. Towards the end, Won and Phil are murdering them off so intensely, the robots know that they are coming and you start feeling bad for the robots. The robots being robots means we don’t have sympathy for the machine, but you can substitute the robot for any rapper’s face. Okay, then you can’t really murder that rapper, but if it is a robot, it’s like yeah, murder them off.

There is one panel where Won and Phil turn into the KKK [Ku Klux Klan]. Why did you choose to do that?
Won and Phil are a reflection of me and I’m learning that my ‘toons are a voice to spread a message, I’m saying things about Oscar Grant in [Won and Phil]. My school did nothing for Black History Month and I’m upset, so I’m saying that in my book.

It’s a great way to make it easily digestible for an audience that isn’t socially aware enough to understand the message.
True that. I’m writing my book; of course I’m gonna say something. Here is a panel where a rapper needs to be axed off; of course I’m gonna make it about the KKK.

Where will Won and Phil go from here?
Animation. For my own personal advancement, I need to take it to animation. I’m in this game, two feet in, and I’m going to hang in there and try to push and be that guy to change the game. For every book you see out there, you can go out and find the same story somewhere else.