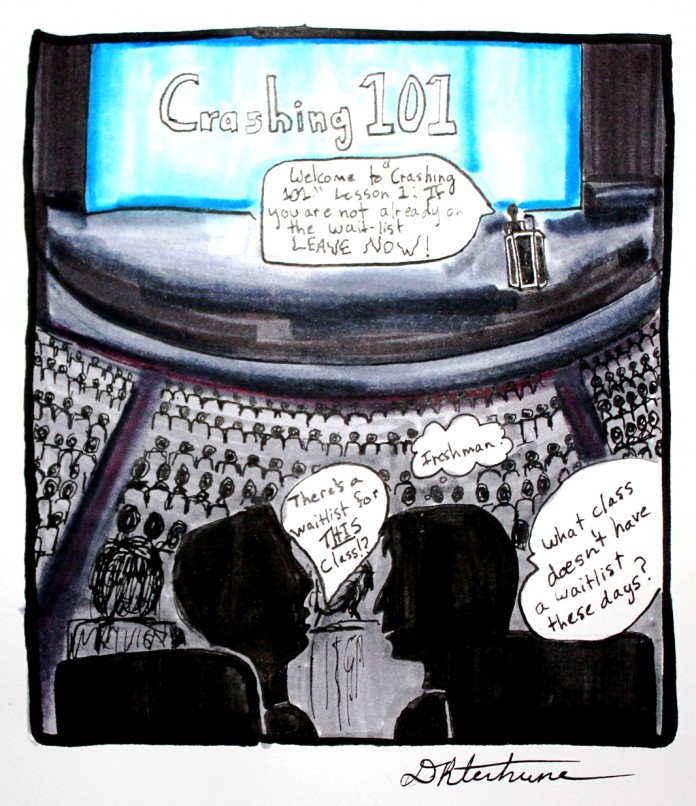 “If you’re a freshman, get out,” a teacher shouts out to a packed room of students. “There’re too many people on the wait list; you don’t have a chance.”

It’s the first day of the new quarter, and classes are literally overflowing. Teachers with only a few spots to give away divvy them out among students clamoring for add codes. Unfortunately, crashing classes has become the norm for most UC Santa Barbara students, and a lot of them will be left sitting on the steps without an add code.

“[On the] first day of the quarter I’m normally swamped,” second-year student Wendy Abram said. “I have to crash classes from 8a.m. to 8p.m. sometimes.”

Fighting for spots in classes used to be rare, not the common experience. In light of the budget crisis, the priority of most college students is to fulfill major requirements, get the required units, and graduate as quickly as possible. The goal of higher education is no longer to pursue learning because of a passion for knowledge, but to get in and get out as quickly as possible in order to save money.

“The education system is starting to feel like a game,” Abram said. “There should be a class called Crashing 101 because what I feel like I’m learning most about is how to get into the classes I need rather than really learning about what interests me.”

Students complain that they are most concerned with just getting the classes they need, and they do not have time to explore other areas of study. In addition, many students are becoming increasingly frustrated that in the face of rising tuition prices, there are obstacles in the way of doing the one thing they as students are here to do: learn.

“I want to know where my money’s going!” UCSB fourth-year Michael Sallstrom said. “How do they have money for new construction if we can’t even get the classes we want?”

The majority of students are in the dark about where their tuition money is really going, and they aren’t alone. According to Changing Universities, a blog devoted to educating the public about the truth of the UC budget crisis, “the administration has been misrepresenting UC’s financial status to not only the public and the state, but also to the Regents.”

After the initial grumbles at the beginning of the quarter, many students forget about their complaints until the next pass time comes along, but doing so is ignoring the bigger issue. Not being able to get into classes or not knowing where tuition money is going is just the tip of the iceberg.
“The system is in crisis at its core,” UCSB Italian professor Claudio Fogu said. “It’s reassuring for people at the top that students are only complaining when they can’t get a class because that means they have gotten used to all the other ways they are being short-changed.”

The university system is the only institution in which fees can be raised so drastically without walkouts and destruction. Can you imagine a 33 percent fee increase for traffic tickets? Or a 33 percent increase in gym memberships? People would simply stop going. Not so with school.

UCSB Associated Students and a collective of student activists are trying to solve the problems and stunt the fee increase infection with a multitude of events this week.

“On Monday, there will be a wild money man roaming around campus, on Tuesday there is a sit-in at the University Center starting at noon, on Wednesday they are urging students to call their Senators and Representatives to complain over extra fees,” says Tiffany Mayville a fourth-year Environmental Studies major who works for A.S. “It will wrap up on Thursday when Student Lobby is taking a delegation to UCLA to join their action.”

No Bail For Former Student in Gang Rape Case

Alumni and Families Flock to All Gaucho Reunion Weekend