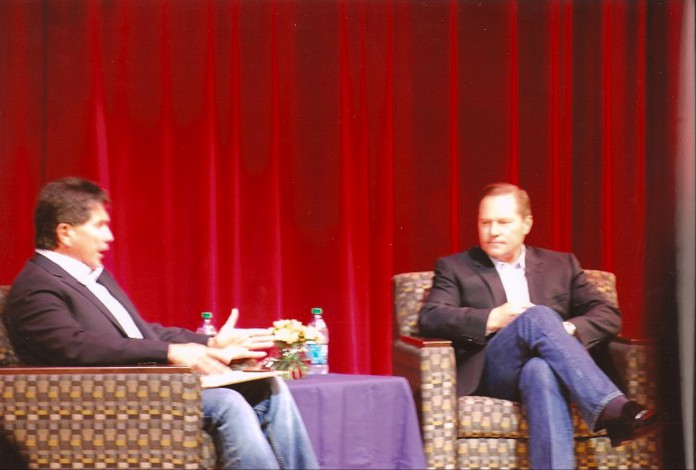 Tell us about yourself
“I’m about to retire in June. My last lecture is on June 2. I’ve been here 31 years, and was a Division 1 baseball coach. I grew up in San Mateo and was a first generation College [grad]. I primarily stayed involved in the education process because of baseball; I played in college. I fell in love with school once I found out that I wanted to coach because suddenly classes that would have been boring to me in the past, like kinesiology or physiology, became intriguing.

I graduated from college, went to Chico State, the Stanford of the north, and got a Master’s Degree. I started coaching at the high school level then made a decision that I wanted to coach at the Division 1 level, and that took some sacrifices. My wife was extremely supportive, believed in me, and made at least as many sacrifices as I did. We left two teaching positions and went to Arizona State for me to be a graduate assistant.

I eventually coached a team that played in the final game of the NCAA tournament (College World Series). I got my first college job at a small conservative Christian college called Azusa Pacific. Then the head coaching job at UCSB became available. There were 36 applicants and I was fortunate enough to get it. We inherited a facility that I would grade as an ‘F’ high school field and we spent 14 years raising approximately $600,000 to develop what is now probably a ‘C-‘ university facility.

We were nationally ranked 12 out of the 13 years. Our highest finish was fifth in the nation, which would be comparable today to Duke in NCAA basketball; we were pretty dominant. We had more than a hundred players sign pro contracts and had about 20 make the majors.”

On teaching
“I love teaching at UCSB and I’m actually going to miss it. I’m concerned about retirement only because I’m going to miss the interactions in the classroom; I really enjoy the students, and I mean that. My classes are very disciplined. If class starts at 11:00, they [students] don’t come in at 11:01, and they learn that quickly. Why? Pragmatism! When you go out there in the real world and you have an eleven o’clock meeting and you show up late, you’re going to get buried, so we constantly try to prepare them for what’s in the real world.”

Besides teaching…
“I also consult Major League Baseball. I presently have three bilingual interpreters in the major leagues. There’s an infielder who just came in here from Japan; his name is Tsuyoshi Nishioka. He’s supposed to be the infield version of Ichiro. His interpreter is one of my people. I helped him get that job and he starts at $45,000-$50,000 a year, gets about $8,000 in meal money, gets full benefits worth $10,000-20,000, and he’s speaking to a superstar in front of national TV.”

Most rewarding thing about teaching?
“I got to coach at UCSB for a long time, and there were great times. There was a lot of pleasure from coaching, but it’s still not as rewarding as teaching in our department has been. If you told me 20 years ago that teaching would be more rewarding than going to the NCAA tournament, well I would say you were crazy.”

Got any tips for aspiring young coaches?
“Here’s what you do. You get a job at a high school and you go get the experience. Then, you bust your tail when you get to graduate school. You select a school that has a program that you like and where you can get in as a volunteer or assistant coach. Now you’re affiliated with a big-name program and you build from there. As a high school/college coach, read everything about coaching and go to clinics. Meet people in the profession. Marry someone who is supportive of you and your profession.”

Parting shot
“Anytime you want, that door is always open. And if you see me talking to three students and you peek your head in I’ll say something like, ‘I have to talk with them but come back in 15 minutes and we can talk.’”

The Tide is In: UCSB Men’s Ultimate Frisbee Team is Going...