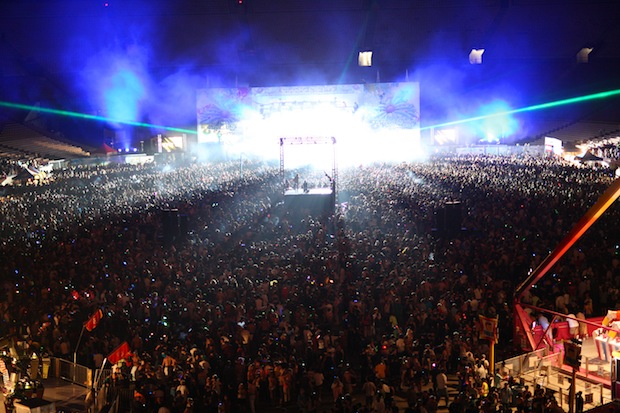 Nothing makes me more excited in the world than a weekend at my favorite music festivals. Unfortunately, anxiety trumps excitement for some in anticipation for the 2011 Electric Daisy Carnival notorious for its electronic dance music. Insomniac, the organization responsible for planning the two-day DJ mania and other popular raves, such as Together As One and Beyond Wonderland, has made major changes for the June 24th through 25th event.

For those who have never been to EDC, allow me to give you a peek into my experiences. Two years ago, I arrived at the Los Angeles Coliseum naïve to the 12 hour experience I was about to endure, however, I wasn’t disappointed.  I enjoyed life to the fullest while feeling free, comfortable, and above all – safe. Come 2010, I found myself pushing through a mob of people while hopping two sets of fences to secure my spot up close and personal with my favorite DJs Kaskade and Swedish House Mafia.

Fortunately, the chaos didn’t stop me or other EDC lovers from speaking less words of praise for what I consider one of the most unique and amazing of experiences.

“Let it be known that if I had the time, money and good health, I would be at EDC every day of my life if I could,” said UCSB Communication and Psychology major Derrick Chung.
However, as the rave phenomenon – characterized by techno, crazy costumes and drugs – continues to grow, so do the risks. The subculture has undeniably evolved in recent years as it attracts different types of people and authority figures are taking notice.

“The problem with big events like EDC is that the people who attend are not the same sort of ravers you would find at a smaller event,” said UCSB third-year and well-known Isla Vista DJ Daniel Dubinsky. “EDC is more mainstream-friendly and becomes an excuse to experiment with drugs, whereas classical ravers attend solely to enjoy the music and meet others like themselves.”

185,000 of those ravers – both mainstream and classical – flocked to the 2010 event where police chaperoned the weekend festivities. But even excessive supervision failed to prevent the unsuspected drug overdose of fifteen-year-old Sasha Rodriguez at the sixteen and up event. Understandably, the cause of death in such an environment was controversial and Insomniac was forced to address the issue publically. Liability for the safety of attendees became a major concern for officials and thus, debate arose regarding if and when the upcoming EDC would take place.

So, to protect the well-being of festival-goers, the location of the 14th annual rave was moved to Las Vegas. Seemingly, a culmination of the drug-filled event in a city notorious for debauchery and drinking is a recipe for a dangerous disaster.

“I think moving EDC to Vegas will make it even more incredible and fun,” said UCSB third year communication major Kaitlin Huffman. “However, Vegas in the summer is hot and people who choose to drink and/or do drugs in one hundred degree heat with overpriced water being sold could cause destruction.”

As a result of these significant changes to the festival, Insomniac implemented a greater number of restrictions to minimize the potential dangers to attendees.

“The safety of the people attending will be compromised because the majority of people who will attend will be there to drink and do drugs. It will attract an even worse crowd in my eyes,” said Dubsinsky. “Insomniac has to keep up with the changing audience and never before has it been so strict on security than it has been becoming over the last two years.

As the hype on the rave culture continues to spread, EDC will only welcome those eighteen and up to limit th event to an older, more responsible audience.

“The epic city Las Vegas – known for its party, gambling, and entertainment – matches the culture surrounding EDC, but it’s not called Sin City for no reason” said Chung. “With younger and younger generations involving themselves in the rave scene, Vegas doesn’t necessarily provide the most censored environment.”

Dedicated fans wait year-round to dress up in next to nothing and dance until the sun comes up at Electric Daisy Carnival. Other partiers save money to drink and gamble for a memorable – or lack thereof- 21st birthday weekend in Vegas. Those who look forward to both have clearly peaked excitement levels.

So although the lineup has yet to be released, anticipation still runs high for the upcoming EDC. Whether we’re safe or not, one thing is positive – debauchery will ensue.

“Paying money to sweatily dance for hours while wearing nothing but what prevents you from getting arrested, while sucking on a binky throughout a personal finger light show doesn’t quite imply the words ‘safety first,’ to begin with, said Chung. “So in the end, I’m so incredibly stoked for what’s sure to be a incredibly legendary and monumental EDC in Sin City.”