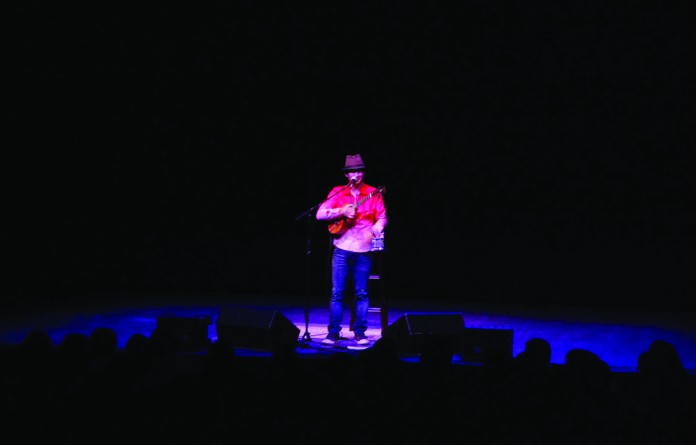 In one day, Jake Shimabukuro was able to change people’s appreciation of the ukulele and of music itself. On Thursday, March 31, UC Santa Barbara’s Storke Plaza and Campbell Hall were filled with smiling faces as audience members joyfully listened to the cheerful sounds of  Shimabukuro’s ukulele.

The solo-performing ukulele artist became famous when his cover of “While My Guitar Gently Weeps” went viral on YouTube and, ever since then, he has been performing and touring with various famous artists.

Before the Campbell Hall show, he honored UCSB with a free noon-time performance at Storke Plaza. The Program Associate of Arts and Lectures, Heather Silva, thought that Shimabukuro would be the perfect headliner for the student appreciation event series.

“We wanted the event series to resonate with the students, and we thought that Jake [Shimabukuro] fit that criterion because he is a young YouTube star,” said Silva.

Shimabukuro proved to be very casual and compelling to students as he came onstage wearing a fedora, converse and casual clothing that made him blend in with the college crowd. The sunny day was made even brighter by the bubbly and pleasant sounds of the ukulele, which Shimabukuro says reminds him of children laughing.

Shimabukuro shared his mastery of the ukulele with the audience and told stories of his life through his music. He played a happy love song, a lively rock and roll piece, a graceful tribute to a Japanese folk song, and covers of popular songs like Queen’s “Bohemian Rhapsody”, all of which portray the wide variety of genres that Shimabukuro encompasses in his music.

By varying the volume and pitch of the chords, and occasionally beating the side of his ukulele, Shimabukuro made the songs his own. The performance wasn’t just a guy singing and playing the ukulele, it was a guy using the ukulele to change and expand the meaning of the music he covered. The audience couldn’t help but smile during his performances and cheer wildly when they were over.

First-year UCSB student Lauren Cox was amazed by his performance.

“He was really good. I don’t know what else to say. I’ve never seen anyone play the ukulele like that before,” said Cox.

The warm feeling that Shimabukuro brought to the Storke Plaza audience in the afternoon was similarly felt by the Campbell Hall audience later that day as they were mesmerized by the plucking and strumming of the ukulele’s strings. This time, the audience consisted of more adult locals and alumni with their children, as well as the expected students in the mix.

Even though he repeated some of the same lines he spoke in the afternoon and repeated some of the same songs, the performances still felt fresh and new. He further showcased his talent by broadening his range of musical genres to include the “ukulele flamenco” and other soulful, emotional selections in addition to more love songs, covers, and story-telling compositions.

Audience members were able to emotionally connect with Shimabukuro because listeners could easily tell that he was very attached to his music. His ability to play both fast-paced, crazy songs as well as slower, more relaxing songs proved to the audience that he was indeed a master of the ukulele and not just some kid who got lucky on YouTube.

The audience displayed their adoration of Shimabukuro with a standing ovation, prompting him to play one last song called “Crazy G’s,” which reflected his Hawaiian heritage. He also showed support of his Japanese heritage through folk songs and a donation box for the Japanese Red Cross.

Shimabukuro offered a last piece of advice to those who play an instrument.

“It doesn’t matter what instrument you play, just play songs that you enjoy because that will always motivate you to pick up your instrument and practice. If you do, you will always feel good and look forward to music,” he said.

The Nostalgia Trap of COVID-19

Seven Nostalgic Movies and Specials to Binge During Halloween