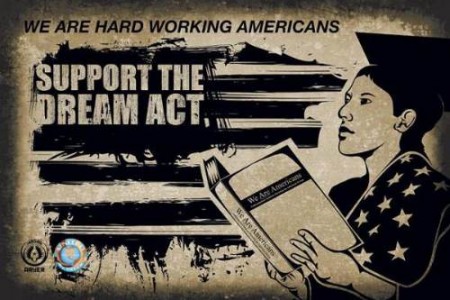 While in Washington D.C. at the 42nd Annual USSA Grassroots Legislative Conference, two University of California, Santa Barbara students allowed me to interview them about being undocumented students in college. Their life stories, so different from most, gave great insight into the challenges and struggles they face as a unique minority group in the United States, as well as students striving for a degree in higher education. The following is an interview transcript depicting the Q and A session I conducted with Kenia Tello (K), a first-year Biology major at UCSB, and a third-year Sociology and Art History major at UCSB who wishes to remain anonymous (A).

How did you come to be an undocumented student at UCSB?

A: Same as any other student, I filled out the UC application like everyone else. The state of California can’t deny you a university education because of citizenship. On the application with they asked my citizenship status, I clicked “other.”

K: I didn’t know what my citizenship status was, and I struggled with it a lot because in the U.S. I have a Social Security Number through my dad’s job and a California Drivers License. So when I applied I thought I would receive some type of financial aid for UCSB, but I didn’t. My lawyer was saying I’m a citizen but the school is saying I’ m not and classifies me as an AB-540 student. I feel like I’ve been here all my life but there are so many restrictions.

What are some challenges you have faced as an undocumented student growing up in the U.S.?

K: I’m in the process of becoming a U.S. citizen right now but it’s really long. I thought by the time I went to college I would have my citizenship, but the same questions remain, “What am I? What do I have and what don’t I have?” For example, when we register to vote at school I don’t even know if I can. I don’t want to be denied so why bother you know? Will my vote matter? With the FAFSA plan I had after I got accepted my parents were supposed to contribute $134 a month, but two weeks before school started I found out I wouldn’t get anything from FAFSA. It was so frustrating!

A: Not being able to receive any financial aid. I can’t apply for loans, so I pay through scholarships and my parents who are also undocumented. It’s like a dead end in all directions. In high-school I realized I had to find my own source of college funding, and I’m forced to do jobs under the table. I applied to scholarships early senior year, and my counselor was very helpful. I had to apply to ones that didn’t ask for citizenship, and I was worried with money not coming in until the end of senior year. I knew I had got into this university, but I was also wondering “can I go?Maybe I shouldn’t study here and go to Mexico instead because the money my parents would send was worth more there.” I didn’t want to leave the U.S., I had been here forever, and I felt that I was entitled to this opportunity. I worked so hard in high-school, why wouldn’t I go? My first year at UCSB I got a full ride with scholarships, and I was so blessed. But each year the money seems less because fees increase, and what used to cover everything is slowly diminishing. I feel the need to graduate as soon as possible.

K: I want to be an anesthesiologist, but my high-school didn’t do anything to prepare you for college. My mentality sometimes is “Oh I’m gona give up,” but my parents are like “don’t worry about it” and put the pressure on themselves. I go to church more because you get spiritual about it. If no human person can help me then there’s power to pray. I would always say “God if you really want me to come here you’re gona help me, the government may have power over my life but God you’re the one that decided for me to be here, I’ll accept anything.” The first time I got to UCSB my mom said “don’t fall in love with SB because you might have to leave.” In lectures it’s hard for me to focus because how am I supposed to buy all these books and stuff when there’s all this weight on my shoulders, I don’t’ even know if I’m going to stay. So my first quarter my GPA went down, I didn’t live near the school or in the dorms. I didn’t really know anyone so I felt isolated and couldn’t talk to anyone about it.

What are some stereotypes or social stigmatisms you face as an undocumented student? Do you ever have to defend how “American” you are?

K: I don’t like telling people “Oh I’m this” when people ask me. I would rather ignore it. I don’t like people feeling sorry for me, so I just don’t think about it.

A: Can’t recall any personal attacks, but I know there’s this big misconception that undocumented students don’t earn their seat at a university. It’s really frustrating because being a U.S. citizen isn’t the criteria to get in, it’s what you did in high-school. You earned that seat, and if it wasn’t given to a U.S. citizen it was for a reason. I worked for it like everyone else, I earned my seat like every other person here, and being undocumented is no way an advantage.

K: Some of my friends in high-school they have their papers, and some of them don’t put any effort in to it. I wish we could just switch statuses, because I went out of my way and did so much. I stressed myself out getting in to college.

Do you ever feel sometimes like the U.S. isn’t really your home, or that you’re unwelcome here?

K: I’ve been here all my life, this is my home. Where else would I go? Sometimes I feel like an outsider, like I’m here but on the side, not part of the group.

A: I do feel like I don’t really belong here because we are constantly told we aren’t supposed to be here, go back to your country. I don’t really consider the U.S. my home any more, don’t feel as attached to it as I once was. I’ve learned how society responds to my community, constantly telling us we aren’t supposed to be here, neglecting us to the fullest. At times I get tired and I’m like you know what I don’t even care any more. I get mad and I don’t want to be a part of something that’s neglecting who I am. It has to be a 50/50 relationship. If you don’t want me here then why am I here?

How would passing the federal or California DREAM act directly effect you or others in your position?

K: Personally it wouldn’t effect me because I’m almost on the verge of getting my FAFSA and citizenship, but I want to make it happen because I don’t want other people to feel what I’ve gone through. There are people that deserve to be here, they work so hard to get accepted to these schools but can’t go because of money.

A: The federal DREAM act would begin the process of me becoming a citizen of the U.S., allow me to work here and drive here, receive social security. It would change my life in terms of opportunities and financial aid, alleviate that concern and worry of where the money is going to come from to pay for schooling. It would also increase the number of undocumented students in the university system, whose number one concern is funding. Having that opportunity to apply gives a lot of people hope and motivation to do well in school and in life.