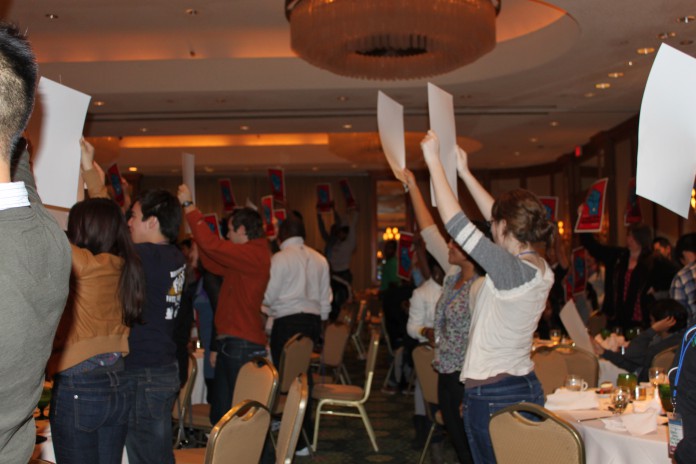 As more Sacramento policymakers and UC Regents continue to support an increase in student tuition costs, without a sufficient increase in federal and state-funded student financial aid, students from California and across the country have decided to take their demands for an affordable higher education straight to Capitol Hill.

15 students from University of California, Santa Barbara arrived bright-eyed and bushy-tailed on the tarmac of Washington D.C. Dulles International Airport at 6 a.m. on Saturday, March 21. Straight from finishing winter quarter finals and papers, these students, selected by the Associated Students External Vice-President of Statewide Affairs office, are given the task of lobbying Capitol Hill officials, Congress members, Senators, and their affiliated staff during National Student Lobby Day on March 22.

The UCSB lobbying coalition is part of the United States Student Association, a national student activism organization established in 1976 after combining the National Student Association and National Student Lobby organizations of the 1940-1960’s. A powerful student rights group, it has helped students across the country develop organizing and lobbying skills in order to increase the power and voice of the student constituency. Through its annual grassroots legislative conferences in Washington D.C., schools from every state are invited to join in student-led lobbying workshops, to listen to panel speakers and USSA alumni advise on maneuvering federal and state politics, and to create strategies for effectively lobbying student demands to legislative officials.

One such panelist was Van Jones, who served as a “green” jobs advisor for President Obama in 2009, founded three successful non-profit organizations, and is currently a senior fellow at the Center for American Progress. Jones compared students who are part of the USSA to the students who led the civil rights movement of the 1960’s and made higher education a priority for Capitol Hill policymakers.

“It’s you generation that needs to help our generation,” announced Jones. “Your generation brought hope back to our nation in 2008, you are the biggest and most racially diverse group America has ever had, and you represent the potential for change.”

Jones also addressed how difficult it is for recent college graduates to find employment during the current national recession, as well as participate in public service jobs because of lack of funding.

“Stand-up and say, where’s my job America?” stated Jones. “You are the Kennedy youth, you don’t want to just take a book and read it, but you want to turn around and read it to a child.”

Stephanie Bloomingdale, the current and first female Secretary-Treasurer for Wisconsin’s American Federation of Labor-Congress of Industrial Organizations, is a USSA alum who discusses how activism for students’ rights and workers’ rights is always intertwined, with both groups supporting the other.

“It’s the students that always demand the next step, in the U.S. and around the world,” remarked Bloomingdale. “USSA has been a powerful leader for social change for over 54 years.”

Students then broke into groups according to regions in the U.S., with UCSB falling under the Golden Pacific region. Schools from the UC-system dominated the Golden Pacific region with close to 100 delegates from UC Irvine, UCLA, UC Santa Cruz, and UCSB. Yet two community colleges, San Mateo and Crafton Hill, made their first appearance to USSA Leg Con, a significant step in USSA’s mission to lobby for all student constituents.

During the first regional meeting of the conference, students discussed strategies for lobbying in Capitol Hill. Norma Orozco, a first-year Sociology and Global Studies undergrad at UCSB, shared tips and advice on lobbying officials.

“Keep presenation points under 15 minutes and use testimonials,” Orozco said. “There’s usually a facilitator that maitnains time, and a secretary who takes notes during your lobbying.”

One of the greatest lobbying points for USSA delegates is the federal Development, Relief and Education for Alien Minors Act (DREAM Act), which was passed in 2001 then eliminated in 2009. Zenaida Perez, a fifth-year Global Studies and Chicano Studies major at UCSB, said that the USSA has sent letters to U.S. representatives requesting the DREAM Act be passed in the upcoming Congress session later this year.

“It will be re-introduced with corrections and improvements by Senator Durban of Illinois, who voted no on the bill before,” said Perez.

Throughout the rest of the 42nd Annual USSA Legislative Conference, student delegates will particiapte in worshops with a wide-range of topics, from effectice fundraising and student health plans, to successful student registration and voting in the upcoming 2012 elections.