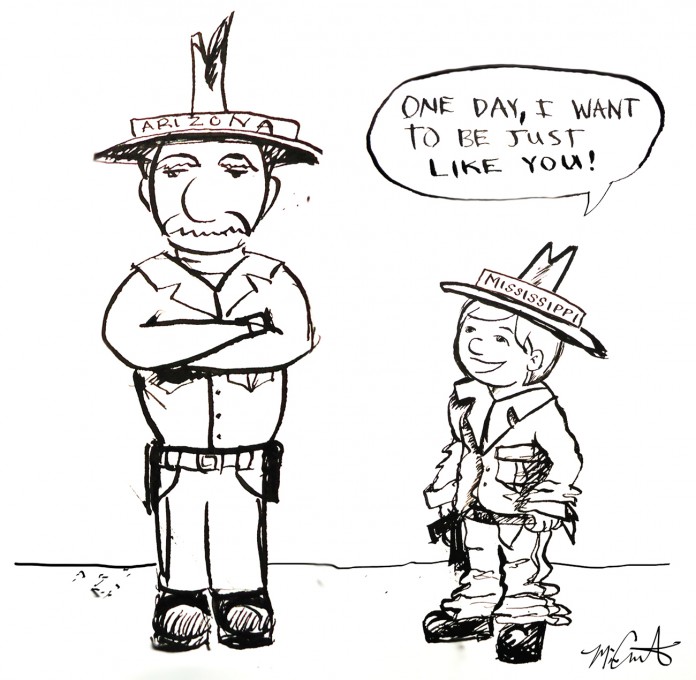 America’s founding fathers would turn over in their graves had they any notion of how the Constitution was being abused in our present day and age. Mississippi’s implementation of SB 2179 in January 2011 is a bandage – like solution to a matter requiring open – heart surgery.

This law, like Arizona’s SB 1070, authorizes police officers to single out anyone who is suspected of being an immigrant, ask for their papers and take punitive measures towards any person who does not have these papers on hand. The only difference between the two laws is that under SB 2179, police must have a previous reason for stopping a person, such as at a traffic stop or while enforcing other laws.

SB 1070 and SB 2179 unjustly form a scapegoat out of people of color as a cause for our current economic crisis and set a precedent for other states to follow. But of course, this is only the tip of the iceberg.

Currently, 25 states are on the Danger List for enacting laws that follow suit with SB 1070; that’s half the nation.

Immigration is not the real issue at stake; this is a political debate over who has more resources and power to implement hasty conclusions to progress their own agendas.

Why are these laws being implemented?

The purpose of these laws, according to politicians, is to make jobs available to residents who are legally able to work and resolve what appears to be a growing problem with immigration. There are facts, however, that invalidate these so – called reasons.

“Overpopulation and dwindling resources are myths,” said UC Santa Barbara Gaye Theresa Johnson.
Johnson explained that the U.S. needs immigrants in order to sustain its economy and that the gap between rich and poor is the widest it has ever been.

This is an indicator there are enough resources to go around – they are just not being allocated efficiently.

UCSB third – year Biology major Akram AbouKhalil said he feels these laws are the wrong way to go about finding a solution. These ordinances are aimed at creating more job opportunities, but tend to work in a backwards manner.

She also explained that when previous employee-sanction laws were enacted to prohibit immigrants from attaining jobs, a guest worker program had to be implemented to make up for economic losses.

So, the laws essentially kick residents out and then invite them back in when the state has been starved of labor and production. The public may be blind to the media’s spin on the causes for our economic depression, but it has never been clearer that the root of matter lies in the hands of faulty governmental decisions and spending that have landed us in this position.

What does this entail for the U.S.?

According to U.S. Census statistics, roughly 30 percent of AZ is Hispanic while an estimated 2.5 percent of Mississippi residents are Hispanic. These numbers shed new light on Mississippi’s enactment of SB 2179.

“For states that are terribly depressed, such as Mississippi, it is easy to target immigration as an issue and use this as a convenient diversion,” said Johnson.

Not only does this distract the public’s attention from the real reasons for our economic depression, but it unjustly accuses those with limited power.

“These laws also give too much authority to police and result in racial profiling,” AbouKhalil said.

Too many beatings, unjust jail sentences and killings have been a result of SB 1070. Mississippi aside, 24 of the 25 Danger Listed states still have intentions to follow suit with their own versions of SB 1070, a chilling thought that paints a dark image for the future of America.

So how bad is it exactly?

Protests, violence, and unlawful jailing aside, these ordinances aimed at immigration with such rigid regulations test our Constitution. It is unjust to deny citizenship to anyone born on American soil.

But according to Johnson, now this, too, is being called into question for natural – born citizens who are children of illegal immigrants. She said by the time the Constitutionality of ordinances such as SB 2179 and SB 2710 reach the Supreme Court, the damage has already been done.

I hope we are able to knock some sense into legislators before issuing these impractical laws.

Why We’re Nothing Without Deltopia