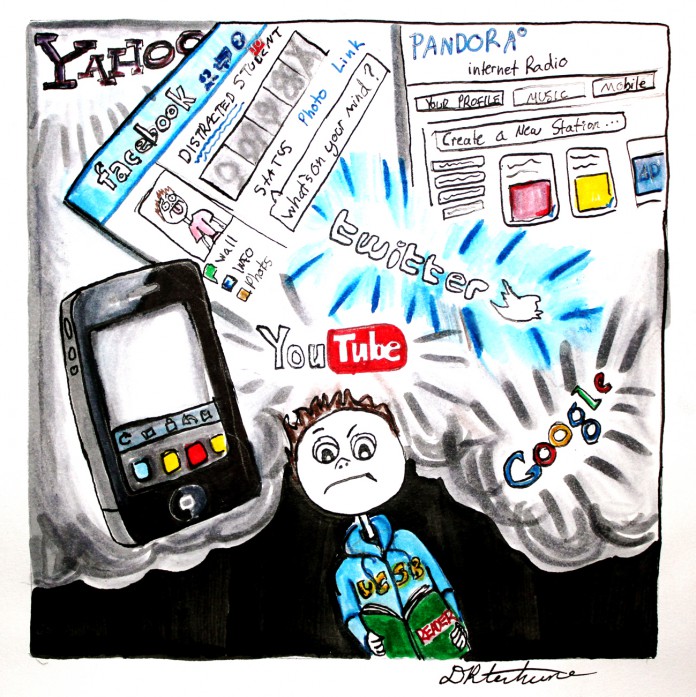 As I stood in the computer lab in the UC Santa Barbara Student Resource Building, waiting for the laptop-lending data system to recognize me as a student, I thought about how technological systems are imperfect. I waited patiently for 20 minutes as the clerk got the okay to bypass the digital check-out system and filled out the Terms of Agreement manually.

I found myself asking the same question Jaron Lanier had asked in his lecture in Campbell Hall two weeks ago: To what degree are we modifying ourselves to suit artificial intelligence that, in fact, isn’t that intelligent? The laptop check out should have taken five minutes maximum yet there I was, watching both the Isla Vista and Mumbai clock in the Graduate office tick away because there was a glitch in the system.

People are crazy about technology these days, and why not? It has given us the water filter and the train, the personal computer and the homing missile. Oh and of course Facebook, which is in a level of superficiality all its own.

But as we’re pursuing technological development as an end in itself, crossing our fingers and hoping that supply and demand will guide its direction, we’re not paying attention to the side-effects of what we’re demanding. Sadly, paying attention is hard and it’s getting harder every day.

Jaron Lanier, the author of the book You Are Not A Gadget, is a visionary computer scientist, a critic of technology and a skeptic of the Singularity, a hypothetical event of the creation of a superhuman intelligence. He did groundbreaking work in virtual reality, a term he coined in the 1980s.

Said to be the time when artificial intelligence exceeds human intelligence, the Singularity is supposed to happen in the next 20 to 50 years. At that time, human consciousness will be uploaded into a computer. Lanier says the Singularity will be the end of the human race.

At the Question and Answer session after a lecture Lanier conducted at UC Santa Barbara, an audience member asked for advice on getting off Facebook.

You may snicker, but he’s not far from being right. Our brains are as wired for the taste of information as they are for cake. But the problem is that we think information is like carrot sticks (healthy and innocuous), when really most of the information we accrue while surfing the Internet isn’t unified into knowledge. Context is the key to grasping information, and Facebook statuses are not the best resources.

Teddy Macker, a UCSB College of Creative Studies Literature and Writing Professor who doesn’t live with internet or a cell phone anymore—preferring the company of his wife and child—is skeptical about technology.

“Much of today’s technology is getting in the way of real thinking. Because of all our gadgets, many [people] literally don’t have time to think. We aren’t thinking long enough about things, slowly enough,” Macker said. “We lack ‘shapely knowledge.’ Our minds, scattered and frantic and glutted with bits of random information, are suffering the effects of what Cornel West calls ‘weapons of mass distraction.’”

So we continue building faster computers and bigger data systems, but what are we really gaining?