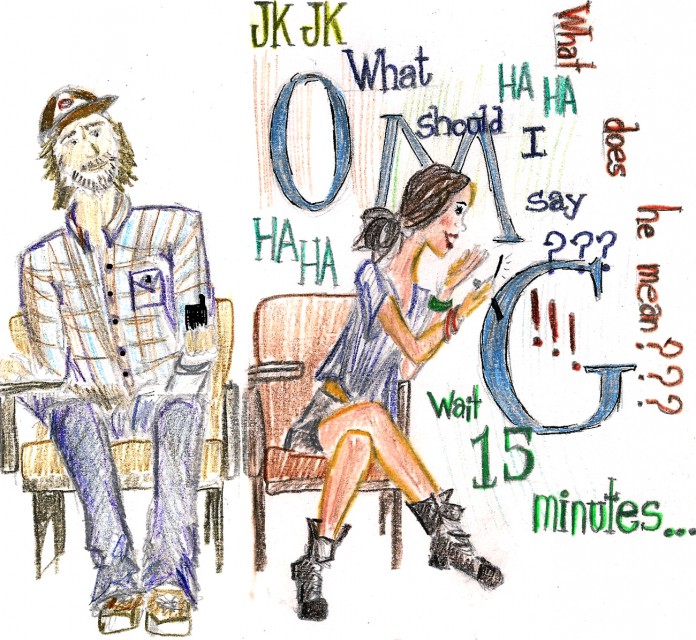 Have you ever noticed the way a girl receives a text? You’ll be sitting in class when all of a sudden there’s a bellowing of laughter, and the last time you checked the professor didn’t say anything even remotely funny. As if that’s not enough of a performance, she’ll start nudging the other girls around her, passing the phone to each one individually so they can all take turns giving a decent “hah” to prove that they care. Then instead of texting back right away, she’ll ask at least fifteen other people, “What should I say?” before finally rapid-fire typing out exactly what she planned on saying in the first place.
Let me tell you, it’s quite the production.

When it comes to guys’ way of texting, it’s an entirely different scene.

First of all, they casually reach into their pockets because, yes, their phone was not ambitiously resting in their palms like a newborn, and they give it a nonchalant glance. Then, if it’s worth responding, they’ll shift their weight to bring their phone into their lap, and type with two slow-moving thumbs. Text sent. Phone back into pocket.

It’s when the sun sets and it’s time to frolic in the streets of Isla Vista that texting etiquette starts to hit the fan.

Whether guys or girls want to admit it, they’re checking their phone constantly because… wait, did it vibrate? Or did the couch just move? The conversations start to steer towards maybe drinking, with secret plans of how to justify sending that second or third duplicate text because, hey, maybe the receiver didn’t get the first one. Or maybe they just forgot to respond. And a response is crucial.

Girls never “forget” to respond. Either they are purposely ignoring the text or they will respond. On the off-chance that they overlooked it, they’ll tell you. Girls will apologize for that kind of stuff; they take texting seriously.

Guys do forget to respond. It’s a gradual kind of thing. Texting for guys is far more secretive than it is for girls, so they don’t want to get caught doing it too often. They put their phones away, think of a response, and then twenty intense minutes into Jersey Shore forget that they never wrote it out.

But of course, they’ll completely overlook the fact they never responded when they are texting that girl again at 2 A.M. to come keep their bed warm. They have no shame.

So girls, screw waiting 15 minutes in between texts. The guys you’re texting probably aren’t playing that same game. Also, guys, don’t think that texting will hide the fact that you’re slurring, drunk somewhere in IV. Girls still know. They are such texting professionals that Gossip Girl wouldn’t even exist without their expertise.

Maybe we should all pick up the phone and call people, even if for no other reason but to avoid all of the drama and over-analyzing, but just the thought of that makes me nauseous.

Until then, happy texting, and remember—always preface and end your texts with a “haha” to make it “less awkward,” and add an emoticon to express yourself as if the receiver would never understand what you’re trying to say. Haha just kidding ;).