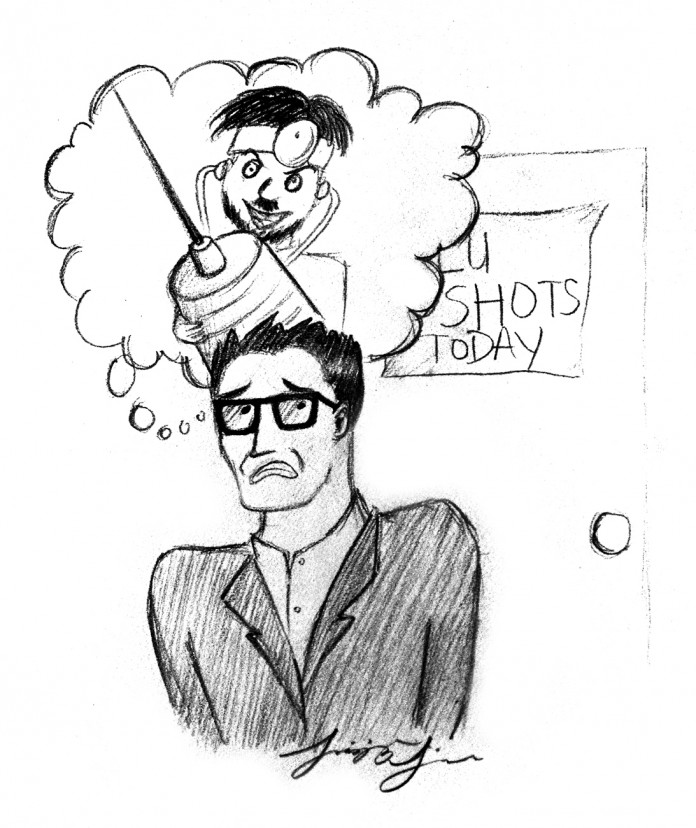 According to the Center for Disease Control (CDC), the flu vaccine causes antibodies to develop in the body, which provide protection against infection from the viruses contained in the vaccine itself. Doctors inject the vaccine, which is made from some of the flu fragments, into our bodies; the vaccine allows the body to learn how to defend itself in advance so it is ready if that pathogen ever invades the body again

There are many myths that surround flu shots; whether they work, if they are necessary and what the various side effects are.

Mary Ferris, PhD, Director of Student Health at UC Santa Barbara, said that the number one myth about flu shots is that they can give you the flu. Ferris asserts that this is not true and that people often mistake the side effects of receiving the shot as the flu.

These side effects can include anything from aching and vomiting to a slight temperature increase, all of which should be gone within 24 hours.

“Getting a reaction isn’t a bad thing, it means your body is reacting,” Ferris said. “Some people think flu shots don’t work because they get sick days, weeks, or months later. It isn’t 100 percent effective, but it is more likely to protect you than hurt you.”

UCSB fourth-year English major Arabella Alameda said that her first experience with the vaccine was horrible.

“I never had them [the flu shots] growing up and when I moved to school I figured I’d get one. It was a nightmare. I got the whole shebang: fever, chills, uncontrollable vomiting,” Alameda said.

But Ferris said that when people get sick immediately after receiving a shot, it is often a coincidence that they became ill at the same time, since it takes the shot about two weeks to become effective.

Sometimes people even confuse their illness with the flu.

“The flu is worse than a normal cold,” Ferris said. “It affects multiple parts of the body, which is why you can get a runny nose, cough, headache, sore throat, stomach ache, some aching and a fever lasting for longer than five to seven days.”

Another myth about the vaccine is that people are only encouraged to receive it so that pharmaceutical companies can make a profit.

“I feel like doctors’ intentions for doing good are often offset by greedy pharmaceutical companies,” Alameda said. “The flu shot is probably marketed because of its ability to generate millions of dollars from a population frightened by the media into believing a shot will prevent some graphic tragedy.”

While there is great potential to make money off of the millions of people that do get vaccinated each year, Ferris stated that flu shots have such a low profit margin that many pharmaceutical companies refuse to make them.

Lan Doan, a graduate student in Public Health at the University of California, Berkeley, believes that there are negative views about vaccinations because people are misinformed and scared.

“People are scared because there is not enough research on the health effects, or they don’t want to experience side effects or are just afraid of shots,” Doan said. “The truth is yes, there are certain instances where someone could have a bad reaction to the vaccination—but if you look at the statistics, more people are at risk of becoming sick with the flu.”

“I believe in preventative medicine. There is always risk of harm when getting any shot or taking any medicine,” Ferris said.
Often, the biggest problem is getting over one’s fear of needles.

UCSB fourth-year Economics major Alyssa Storm said the only thing that has influenced her decision of getting vaccinated was the sickness and pain she felt from the shot.

“I hate needles. If they turned the flu shot into a pill or something, I would consider taking it,” she said

Within the last five years, a nasal spray vaccination was introduced to offer an alternative to the injection and is expected to gain popularity.

What many also don’t know is that the flu shot is not meant to only protect a single person, but that there is also a larger picture to consider.

The term “herd immunity” describes a form of immunity that takes place when enough of the population is immunized that those who have not developed immunity are also protected.

“Vaccinations help protect the spread of the flu to the most vulnerable populations, like children, the elderly and pregnant women,” said Doan. “I think it is important to look at the bigger picture of why the vaccinations are offered, which is to protect the population from becoming sick.”

The flu is highly contagious, and although influenza has been around for a long time, people still continue to die from it.

“There is no benefit to exposing yourself to something you can easily prevent,” said Ferris.

In an environment like a college town—where the norm is to share cups when playing beer pong, live with multiple others with no guarantee of their hygiene practices, and scarcely sleep—student awareness of preventative measures could decrease flu cases.

“Avoid exchanging oral secretions, wash hands thoroughly, have a good diet and adequate amount of a sleep, and avoid spreading it by staying at home if you are sick,” said Ferris. “You are most contagious right before and right after.”

And to all those parents who tell us to grab a sweater when going out so as not to catch the flu, Ferris stated that there is no research to support that cold weather heightens chances of contracting the flu.

Student Health is still giving out vaccines for anyone interested in being immunized, and since the flu virus mutates into new strains each year, the new vaccine will be available in September. For anyone who may be sick and would like to know if they have the flu, Student Health also offers a quick throat swab test to check for the flu.