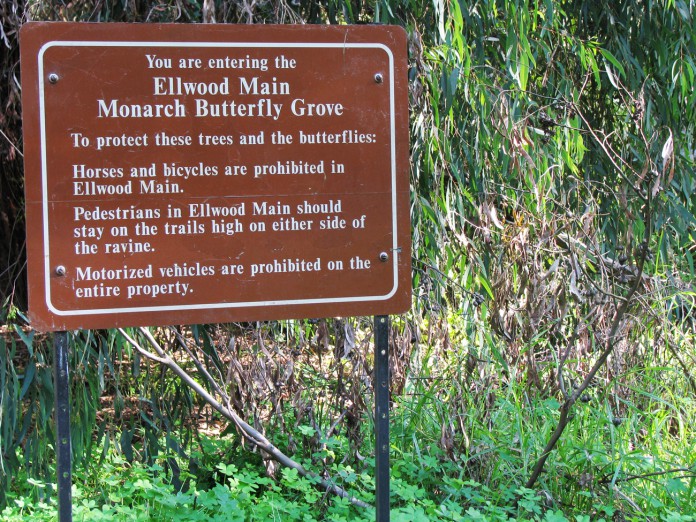 The month of January in Santa Barbara could hardly be considered winter with sunny skies and weather temperatures pushing upward of eighty degrees. It would be a shame to waste these beautiful days by not exploring the great outdoors.

A trip to the Coronado Butterfly Preserve serves as a great activity and is open daily to the public for free from sunrise to sunset to observe these creatures in their natural habitat. The nine-acre space, located a mere three miles from the UC Santa Barbara campus, is home to Monarch butterflies from November through February.

As they cannot survive a cold winter season, Monarch butterflies migrate to the California Coast in masses during this time.

At first glance, the Monarchs are difficult to distinguish from the leaves as they rest in clusters under the shade of eucalyptus trees. But once spotted, the butterflies, reaching up to 6,000 in number, are noticeable.

This year drew four times the amount of butterflies than those that migrated in 2010, but over one-fourth less than a decade ago and ten percent less since their arrival over thirty years ago. Although the reason they migrate to such a location is unknown, the Monarchs continue to make the 3,000 mile round trip journey year after year.

“They’ve been here for thousands of years, one might say,” said Conservation Director William Abbott. “This year was a very good one for the butterflies and nobody really knows why. It may be the prevalence of a particular plant, the milk leaves, but everyone has their own opinions. It’s is interesting to note, however, that they had only preferred to aggregate in eucalyptus trees for the past 200 years.”

The Monarch docent wandering the grounds explained to inquiring visitors that mating season begins when migration season comes to a close, serving as a warning to watch one’s steps to avoid any nests that may blend into the ground. This word of advice is necessary when sightseers reach up to an average of 1,000 people per weekend during butterfly season.

The Land Trust purchased the preserve using public and private grants as well as community donations.

“We’ve owned the land since 1998; the local neighborhood did not want the school district to sell the property so they engaged us in 1998 to step in and purchase it,” said Abbott.

The protected land serves as an entrance to the Ellwood Main Monarch Grove and also links to coastal trails, creeks, meadows blooming with yellow flowers, and the beach.

“Coming back to UCSB after being abroad, I have realized all of the opportunities around me I have been missing out on,” said UCSB third-year Communication and Psychology major Katie Atwell. “The butterfly reserve is a definite chance to see and explore the nature around our beautiful home in Santa Barbara.”
So if your valentine is an outdoor-lover, head over to the Butterfly Reserve for another Santa Barbara bucket-list worthy afternoon.