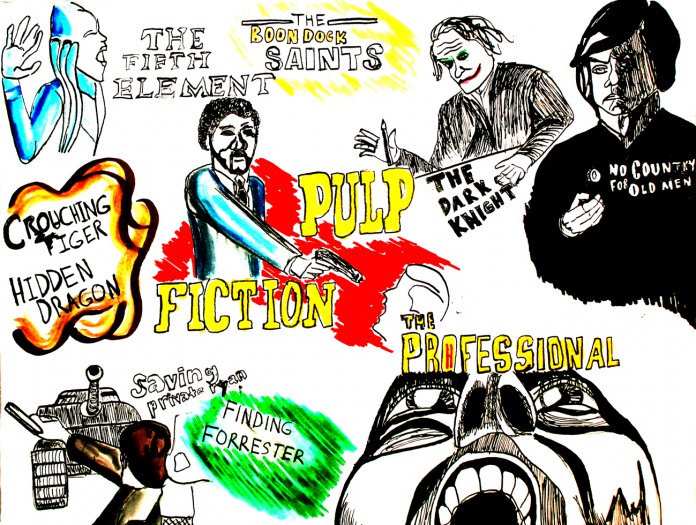 Every once in a while we see a movie scene so bad-ass that it scrambles your brain, breaks your jaw, and makes you say, “Damn that was cool”. I’m not talking about your everyday blockbuster scene that needs to wow you with special effects, blood, gore, and baseless fighting. I’m talking about scenes that have that unique combination of action, dialogue and just a pinch of madness that give them a real attitude. And really, if they are bad-ass enough to be on this list then they better be bad-ass enough to be on YouTube so, with the tube Almighty’s help, here are the top ten bad-ass movie scenes of recent memory. Warning: spoilers, violence and bad language ahead!

Escaping 200 police and swat members storming your hideout is the easy part. The hard part is making sure both your friend and your plant make it out safe and sound. That sneaky Stansfield lurking in the shadow doesn’t help matters either but luckily Leon has a solution for that too. Points scored for the difficulty of escape, execution (literally) and brilliant finale (puns intended). And yes, that’s a young Natalie Portman fighting with our antihero.

One of the most iconic antagonists of 21st century cinema can be summed up in this infamous scene. Heath Ledger’s homicidal and ingenious Joker woos a group of mob leaders with the help of a little magic trick. Who knew pencils could ‘disappear’ like that?

One could make the argument that every scene in this movie deserves to be on this list, and that argument is pretty valid. Perhaps I ought to make a top ten list just for the Saints. But if I had to pick one it would be this scene. Willem Dafoe’s deduction, “television is the explanation for this” is a hilarious addition to boot. Who knew that rope would be so handy in a tight situation? Apparently, the guy who invented rope.

Have you ever had a teacher who was so egregiously wrong in their assertions but you could never think of the right thing to say? Of course you have. The state of the California educational system practically guarantees it. Luckily for us, Jamal Wallace (Rob Brown) stepped up to deliver the rebuke of all rebukes to his not-so-favorite educator. Extra points for defending a peer, Jeopardy! worthy powers of memory and for his humble you-left-me-no-choice-but-to-crush-you-in-front-of-everybody attitude.

Thanks to Javier Bardem’s ruthlessly indifferent character Anton Chigurh, the term ‘Friendo’ has now been added to the colloquial urban dictionary as a ‘not-so-subtle term of intimidation’. Bardem’s Anton character can now be included in the list of most feared antagonists of all time. And really, he has a shotgun with a silencer?

Lead the assault of a heavily fortified beachhead and secure the location? Check.

Find a single soldier in a European sized haystack in the midst of WWII? Check.

Protect said soldier while leading an ad-hoc squad against a platoon of German infantry supported by armor? Check.

Fight a tank with a tiny little pistol and somehow pull it off? Check.

Anyone who can use Beethoven and Mozart as inspiration to do one’s job is certainly a bad-ass, but this guy has a completely different idea in mind. Who knew Mr. Maniacal Maestro would be Christopher Nolan’s future Commissioner Gordon?

There are fight scenes (Matrix), there are battle scenes (Any Michael Bay scene) and then there’s this. A perfect amalgamation of beauty, art and deadly fighting. Triple points scored for weapons proficiency, dialogue efficiency and brilliant choreography. Bonus points for casting (There’s a reason Zhang plays a bad girl in Rush Hour as well).

How can we have a bad-ass list and not include Samuel Jackson? The answer is we can’t. Apart from anything in Monthy Python and the Holy Grail, Tarantino and Jackson’s little homage to the prophet Ezekiel, prophet of large guns, loud voices and sound-boardable monologues, is the most likely to be referenced clip of all time and makes this list as the uncontested alpha. Now suggest me a better clip for the top spot…Samuel Jackson dares you..in fact, he double dares you.

Runner ups. They couldn’t quite crack the top ten but they’re cool anyway:

Do you disagree with these selections? Have any suggestions of your own? Then Like us on Facebook at The Bottom Line (UCSB)