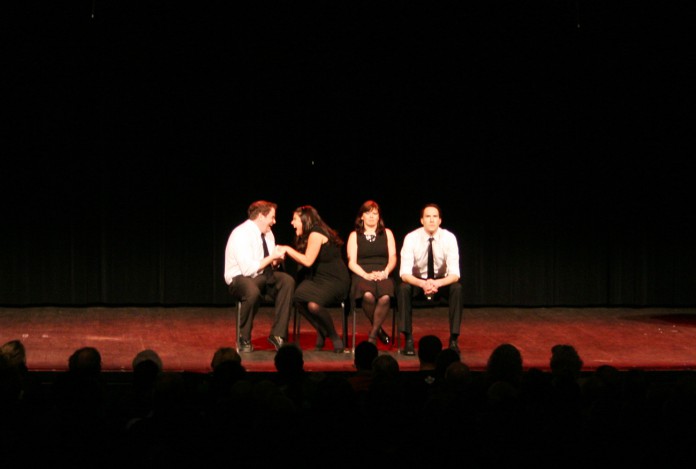 The audience was all laughs at the Second City comedy show on Thursday, February 24. The two-hour event, hosted by UCSB Arts & Lectures, was a five-person performance of short skits, songs and improvability.

Hilarity was sure to ensue when the company famous for giving rise to big names such as Tiny Fey, Steve Carrell and Stephen Colbert came to town. It was no surprise the Fair & Unbalanced tour stop at Campbell Hall sold out almost immediately.

The cast of two men and three women took the stage and didn’t waste any time before cracking inappropriate jokes during skits ranging from 30 seconds to five minutes. Each character elicited a different personality type during the pre-rehearsed parodies about topics ranging from hook ups to working as a model/dancer at Abercrombie and Fitch.

Needless to say, there was something for anyone with a good sense of humor. And since there was not another student within my viewing range, it is only safe to assume the laugh-out-loud cheers and applause after scenarios about underage drinking and blatant sexual references were coming from the 45 + year olds surrounding me.

A personal highlight was listening to one female performer break out into song about the oh-so-dreadful “Drunk Dial,” not failing to miss any details of how such an experience takes place. The lyrics spoke of a sad woman standing knee deep in Trader Joe’s Chardonnay and making calls she wouldn’t remember the next day. Her solo was followed by a coordinated sing-along with her other co-stars while the men pranced around stage in their boxers. The skit elicited cheers from the older couples whose laughter suggested they were far too familiar with the late-night booty call situation.

Their true talent was further displayed with improvability acts. The loud audience was eager to participate when asked for suggestions. People from all areas of the venue could be heard shouting out, “Bat Mitzvah,” or “Funeral,” when asked about ‘places you would give a speech.” Others set the scene for different games in “The Baroque Era,” or themed a song around the subject of “Aliens in Greenland,” to which the cast spiraled into a song about marrying Jews.

“We are not only actors and improvisers, but we’re also writers,” a cast member said.

Some faithful fans even followed the traveling gig from coast to coast.

“I’ve also seen them perform in Chicago,” said UCSB alumnus Political Science and International Relations major Tyler McHugh. “I think they were funnier back East because it was more political…and we were a little drunker.”

Whatever the level of absurdity, skit, or topic, Second City was an entertaining success.

“I really liked how it was fast paced and how relevant to today the show was,” said UCSB Psychology major Nicole Sabes. “I thought the comedians and audience were both high energy. It was my first time seeing a comedy show, but I would definitely go see more.”