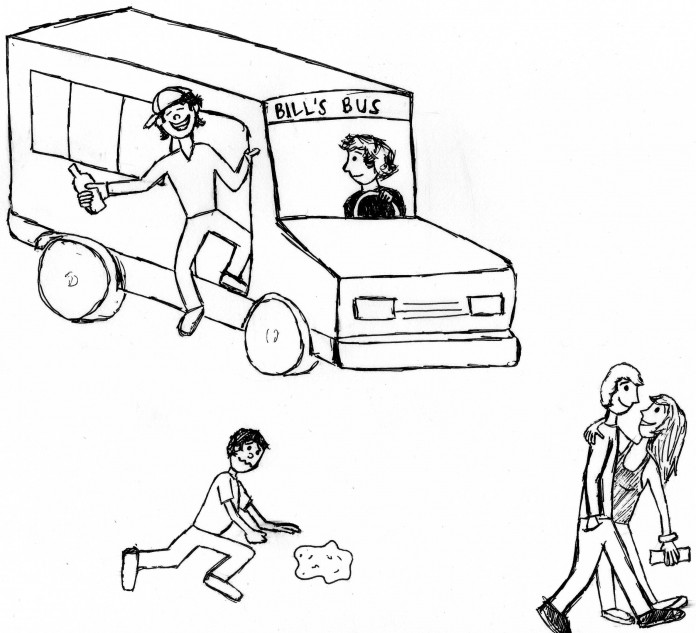 With the 20-year anniversary of Bill’s Bus coming up, we checked out the best and worst parts of riding on Bill’s Bus as an alternative to taking a cab downtown Thursday nights.

“When you are driving college kids around, there is bound to be someone who gets sick,” said owner Craig Jenkins, who bought the business seven years ago from Bill Singer. Jenkins took over the business with no stoppage in service from Singer after Singer handed him the keys to the business and the bus.

Sick passengers are common, especially since Bill’s Bus specializes in transporting potentially drunk people from Isla Vista to downtown Santa Barbara and back.

But the job doesn’t seem to bother the drivers.

“When someone is sick, we provide trash bags and if they spill we clean it up immediately, thus preventing anything worse,” said Jenkins.

Bill’s Bus charges ten dollars for a round trip downtown, where they drop passengers off at State Street and Gutierrez, and seven dollars for a one-way trip. On the other hand, paying to take a taxi could cost up to 30 dollars one-way. Taking the MTD bus would seem like an even better deal since it’s free for UC Santa Barbara students, but MTD doesn’t travel that late. The latest bus trip, according to their website, is from the transit center to UCSB North Hall at 10:10 p.m.

Taking into consideration time for loading-up and dropping-off, Bill’s Bus takes just as long as driving and you don’t have to search for parking or find a sober friend.

Jenkins says the busiest time of the year for the bus is in the spring and the busiest night of the week is Thursday. He also cares about the students and their safety when he says that the importance of the bus is to keep kids from drinking and driving.

“It’s best attribute is that it is a great way to drink responsibly and they make it a really fun and entertaining trip downtown,” said UCSB fourth year History major Tina Hatano.

“I think they do a good job of fitting on as many people as they can. There is definitely a lot of people, but I also think that is what makes it so fun.”

Although Thursday nights are the busiest and the bus is packed, Bill’s Bus has multiple buses running the same route to accommodate the demand.

“We always get everyone home safely, and we always have enough buses to take everyone” said Jenkins.

Other stops Bill’s Bus includes are trips to Old Town Tavern for drinks and Karaoke or to Zodo’s Bowling and Beyond for a night of strikes and spares.

“Wednesday nights are discounted to five dollars, and we go to Old Town Tavern and Zodo’s,” said Jenkins.