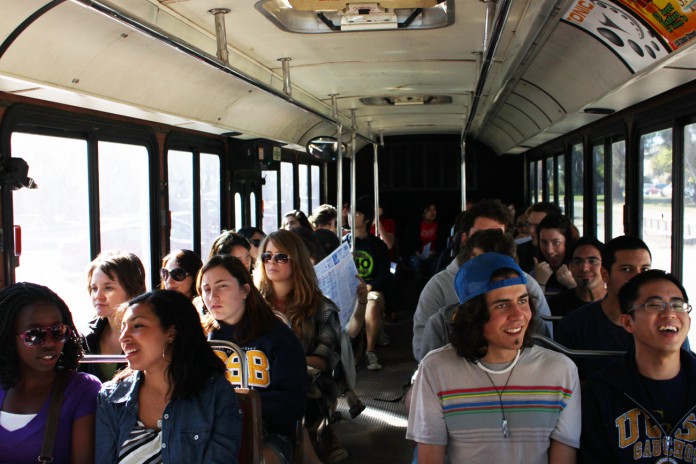 All it took to motivate eighty students to willingly rise out of bed before nine in the morning on a Saturday was a free breakfast of bagels, peanut butter and jelly and orange juice.

The Intervarsity Christian Fellowship, Associated Students Community Affairs Board and A.S. Local Affairs office put on the first ever “Santa Barbara City Walk,” an event organized to take students out of Isla Vista and educate them about issues facing the community and to familiarize them with the unknown aspects of Santa Barbara.

The morning walk was followed by an afternoon of meeting new people, speaking to leaders of various non-profit organizations and learning about opportunities to get involved in local affairs.

The large group met and congregated at Manzanita Village, where students were divided into four teams. Leaders handed out a large city map, a brief description of five main locations to stop along the walk and a bonus scavenger hunt list.

Everyone loaded onto Bill’s Bus, where Benny Benassi blasted the speakers as if it were a Thursday night heading out to the bars. But the main goal was to show UCSB students Santa Barbara in a new light.

The destinations stretched beyond downtown State Street to the edges of the city.

Teams dispersed and separated with one hour to navigate on their own before they were to meet back up.

Eddie Gonzalez, Youth Center Director of Casa de la Raza, or “House of the Races,” greeted teams to discuss the organization whose ultimate mission is to preserve the Latino culture and provide a facility that enables people to help themselves.

Students toured the space decorated with powerful graffiti and large performance rooms for hosting Quinceñera and wedding events. Casa de la Raza is booked solid almost every Saturday through 2013. Even bands such as Sublime have utilized the building’s surroundings and stage in the past.

“I’m gonna put it simple. We like to party, party big and party hard,” Gonzalez joked.

“Fernando’s homemade churros” were distributed and devoured as a special treat for the visitors on the way out.
Whether it be Gonzalez’s motivational speaking or incentive from the sugary pastry, teammates made plans to return and volunteer with other UCSB students as tutors are a part of the after school program.

One block away, a PUEBLO Action Fund speaker met teams at the Day-Laborer pick up site, where Latino men sit and wait all day in hopes of being picked up for temporary work.

PUEBLO raises awareness about the issues of deportation and tenant/immigrant rights.

Rich Sander of the Ufizzi Mission Project waited on State Street to discuss the downtown bar scene and its effect on crime rate and alcoholism in the community.

Sander highlighted that within the span of one block, nine bars and restaurants held liquor licenses, which in turn influences those homeowners around the area. Sander encourages a healthy lifestyle where drinking is a safe and fun activity with friends, rather than a dangerous and rowdy one.

Other sites included The Village Apartments, where students learned about education inequality and family programs and the farmer’s market, where students meet with leaders of the A Rocha community garden project.

Teams made it to an average of three city walk stops before reconvening along the beach path at Pershing Park for a barbeque.
During the barbeque, the main topic of the day’s event was further addressed: the problem of homelessness in our own community.
“Not a lot of students know that Santa Barbara is in the top five percent of homelessness in the country,” said Jake Whitehead, UCSB fifth-year Religious Studies major who co-planned the event. “It’s not just the rich Santa Barbara as we sometimes see it. Students can actually do something about it [homelessness].”

People were encouraged to step out of their element and find a stranger in the park, make friends with them and welcome them to join the meal.

“Why don’t we actually have a conversation with these people who don’t have a home?” asked Sander. “Everyone has a story. We’ve come to define them as “homeless,” but that’s not defining of them.”

Between the raffle prizes donated from restaurants on State Street, delicious food and perfectly clear skies, everyone was more than pleased with their decision to attend.

“I came into today with an open mind and the whole event blew me away,” said UCSB first-year Biochemistry major Melanie Supple. “I had so much fun, saw a lot of the city, and met a lot of cool people. It was a great way to spend the day.”