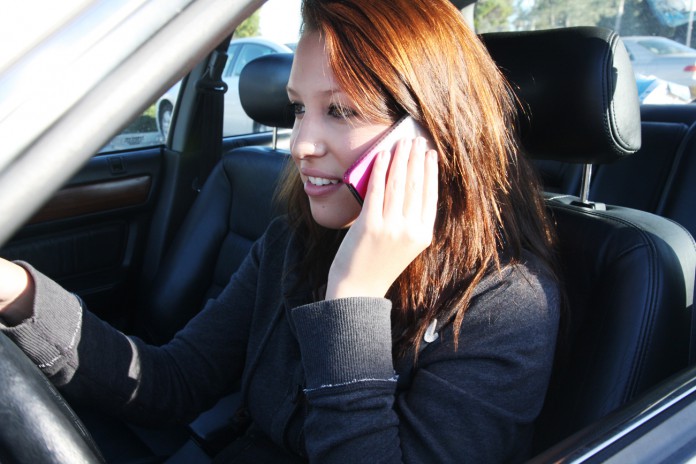 The Goleta Police Department cited 74 drivers when implementing a zero tolerance operation on January 19, handing out citations to drivers talking and texting with their cell phones. While it is legal to talk on cell phones while driving, it can only be done with hands free devices; holding a phone and talking or texting while driving is illegal, according to Governors Highway Safety Association.

“Even with hands free devices, [a phone conversation] is distracting to the driver,” third year UCSB History major John Eberli said. “Driving is one of the most complex and hardest skills human can learn but people take it for granted.”

In Isla Vista, talking on cell phones or texting while driving poses a special danger because there are many bikers and skateboarders moving alongside cars. Drivers are required to pay close attention to the streets with bikers coming at every direction. Goleta’s zero tolerance operation will influence IV drivers to decrease their cell phone usage while driving, making the streets safer for all forms of transportation.

“On Mythbusters, it said talking on the phone while driving is almost as bad as driving drunk,” Eberli said.

When a driver takes their eyes off the road for a second too look at their phones, the result can be equivalent to driving with their eyes closed. That leads to drivers not being alert enough to react to oncoming traffic. Some say just walking and talking on the phone can be distracting.

“I’ve actually walked past [where I intended to go] because I was distracted [while] talking on the phone. And it did not happen once. If you’re absorbed in a conversation you can be completely phased out,” Eberli said.

Many residents like Eberli recognize the importance of being alert while commuting on the streets of IV, due to the biking and skating community that UCSB has.

“Sometimes when I’m skating down IV, I [freak] out because of the drivers [and how they drive],” UCSB first year Journalism major at SBCC Mike Giordano said.

Giordano says that sometimes people are bad drivers to begin with. The causes of car accidents cannot be placed solely on technological devices. However, it would be safer to not let anything, like a phone conversation, be additional distractions to people on the road.

Cars in IV do not have the right of way on certain streets, like Pardall, so when bikes are speeding across the streets and drivers are distracted by a phone conversation, the consequences may not be good.

Giordano was on the streets and saw a girl fall after biking at a fast pace, right into a car. He did not know the cause of the accident but witnessing it showed how easily one could get hurt in IV.

One way commuters get into accidents is because they cannot hear oncoming traffic. For car drivers, having both headphones on is illegal and the same applies to bicyclists. Many IV bikers and skateboarders do have headphones on both ears while riding. Isla Vista Foot Patrol’s Senior Deputy B. Henricks suggests people be more aware of their surroundings and follow the rules of the roads, like listening to music with one headphone.

“Students need to learn how to signal and all the violations. At night people don’t have reflectors; they ride on the wrong side of the road. People need to follow all road rules [which are] applicable on the bike,” Henricks said.

More education regarding bicycle safety and bicycle theft will help make IV safer for its diverse community. By providing the community with safety knowledge, commuting will be smoother and safer.

“There are many people that just bike pass by the stop signs. [When there are people that do stop before they bike by a stop sign] we almost want to pull them over and thank them,” Henricks said.

Car operators are responsible for keeping their hands off their cell phones while driving. To decrease the chances of any accident occurring, bikers and skaters need to obey road rules and pay attention to their surroundings.