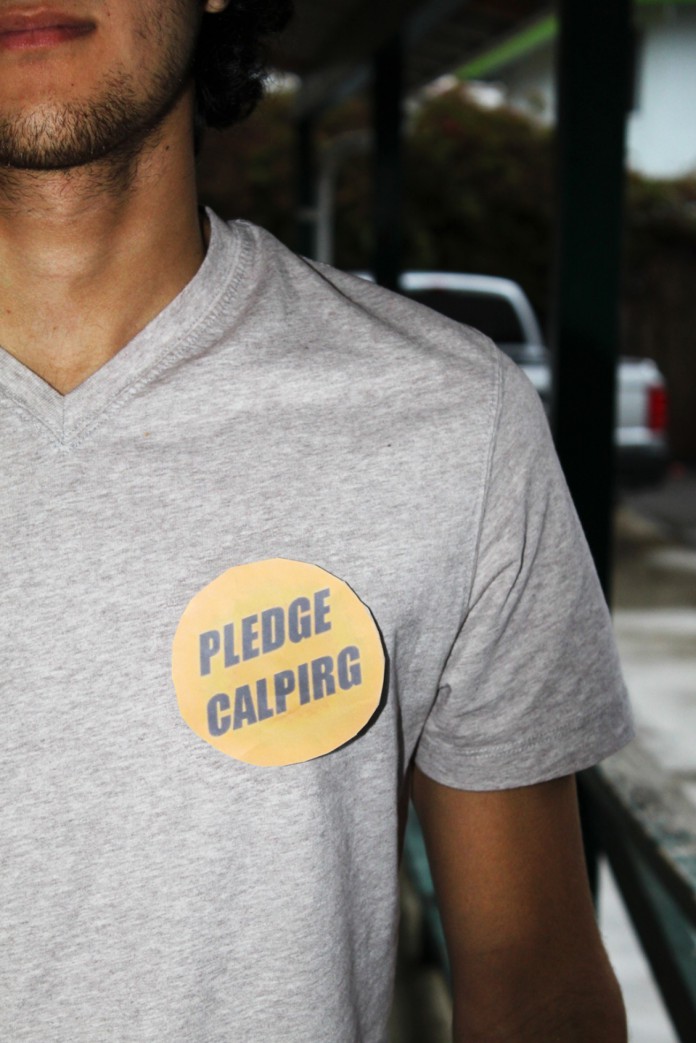 Across the UC Santa Barbara campus within the past few weeks, bright orange “I Pledged” stickers have been taped onto people’s clothes. Multiple flyers have been posted on bulletin boards and interns have been strategically placed around campus to approach students. Who are these people and what exactly do they stand for?

The student interns represent California’s Public Interest Research Group (CALpirg), a student-led public interest research group that’s been around for the last 36 years. Their mission is to raise awareness and bring about change for the important issues that directly pertain to students.

Some of their campaigns include affordable education, cheaper textbooks, global warming, saving the oceans, hunger and the homeless. Since it is a student-led interest group, the campaign’s issues are based on students’ votes and the issues that they would like to change.

Even Santa Barbara City College students like Save the Oceans Campaign Coordinator Jessica Yazzolino can get involved in CALpirg.
“I learned about it through my best friend at UCSB, and it sounded like a great opportunity to have an internship where I can make a difference,” Yazzolino said.

CALpirg is an independent lobby group, so the chapters mainly rely on individual students to support their organization. Currently, CALpirg uses the pledge system, which is a contract with the school stating that they are allowed to remain on campus as long as 30 percent of students pledge five dollars per quarter.

Because of the 30,000 Californian students who pledged, Calpirg continues to fight the controversial issues that the state faces today.

Yazzolino says that CALpirg used to be covered by student fees for students attending all University of California universities. But CALpirg fought a large pesticide company in 1995. The company almost lost revenue because of CALpirg’s lobbying against pesticides. After these events, the UC Regents board banned CALpirg from receiving school funding. Unless CALpirg could get 30 percent of the students to pledge money to them every year, they are required by law to leave any campus offices.

“This was many years ago, but it seems like students really care about the topics we work on because we haven’t left the campus yet,” Yazzolino said. She continued that all the UC campuses count toward the 30 percent.

CALpirg student intern Zoe Zhou describes her experience in working for CALpirg and the wide array of topics they cover.

“I first heard about CALpirg through an announcement in the beginning of class last year. What attracted me was the wide array of issues CALpirg addressed. Even though I can’t participate in every campaign, I liked that CALpirg works on so many issues that I care about,” Zhou said. “Also out of practicality, CALpirg’s internship program offered flexible hours and operated on campus.”
One of the major upcoming events that CALpirg is hosting is a run to feed the homeless 5k. Supporting its Hunger and Homelessness campaign, the run aims to raise money for local shelters in Santa Barbara County.

During the month of April, multiple stations in Isla Vista will be hosted for the runners to make peanut butter and jelly sandwiches for the homeless. The entry fee of five dollars and the sandwiches will all go directly to the homeless and to those in need.

“The five dollar fee will include entry to the run/walk and a T-shirt,” said Hunger and Homelessness Campaign Coordinator and UCSB third-year Psychology major Amy Maggard.

Maggard said no one will need to bring food to make the sandwiches because the supplies will be donated.

“As a transfer student, I saw CALpirg as a positive way to work on the issues important to me and it’s a good way to make friends,” sums up Maggard.