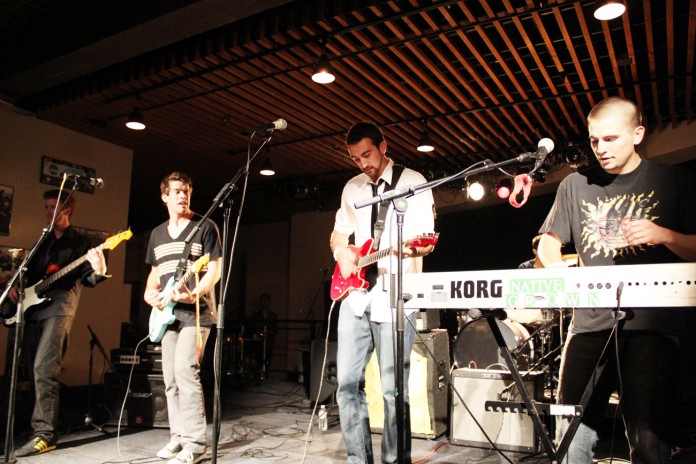 Associated Students Program Board hosted Battle of the Bands at The Hub on Thursday, February 24, pitting four top local musical talents against one another to see who would emerge as the winner to earn a slot on the 2011 Extravaganza line up.
Extravaganza is the biggest annual musical event to take place at UC Santa Barbara. Last year’s line up featured hip-hop star Drake and included a performance by the 2010 A.S. Battle of the Bands winner, Soul Minded, and many others.

Dante Elephante, Sprout, Junipero, and The Release were this year’s four contenders.  Four music industry professionals served as a panel of judges and decided the winner. Each band, despite varying lengths of songs, was given roughly the same amount of stage time. Although the event was a competition, all the bands were supportive of one another. They were respectful, watched each other’s performance, and the closing act—aptly named The Release—began their set by saying, “Let’s hear it for all these great bands that played tonight!”

Sprout was the first band to hit the stage. They performed folk-blues style with a lot of soul, and they had a Cajun drum player, making their music 1,000 times more interesting.

“Sprout reminds me a lot of The Grateful Dead,” Scott Emerick, a UCSB fourth-year History Major, said. “It seemed like all the bands were hippies or influenced by 60’s and 70’s music.”

The second band, Dante Elephante, had a surf rock sound that certainly kept the 1960s and ‘70s influence alive, but was also reminiscent of the band Vampire Weekend. One song called “Over and Over Again” was unique for its repetitive, cyclical quality, while another song was about their favorite food places in Isla Vista.

Junipero took the stage next. To call them Indie would be an understatement. Junipero was in a world of their own and didn’t relate very well very many of to those in attendance that night. Conversations among the audience literally sparked up mid-performance.

“I think that song was about a fire extinguisher, I’m not even kidding,” said UCSB first-year Undeclared major Collin McGrath. “And was that last one about Captain Planet?”

Other audience members appreciated the diversity of the performances that night.

“It was interesting to hear bands from our school. I didn’t realize the wide range of musical styles you could find here, it was like ‘wow I’ve never heard that before,’” said UCSB fourth-year Anthropology major Lindy Ramirez.

The night’s energetic closer was The Release, who seemed to have a magnetic quality that drew the audience in. At one point they even got the crowd to sing along to a chorus.

Tim Coburn, a fourth-year Anthropology Major at UCSB, gave his take on the night’s performances.

“I really liked the funk band because they go the crowd into it. They had the most energy by far. Although Junipero’s style was—interesting,” he said.

The winner was selected at the end of the night, with Sprout taking the lead. It turns out the Cajun drum brought just the right amount of diversity to the performance. You can check out their unique sound at Extravaganza 2011.