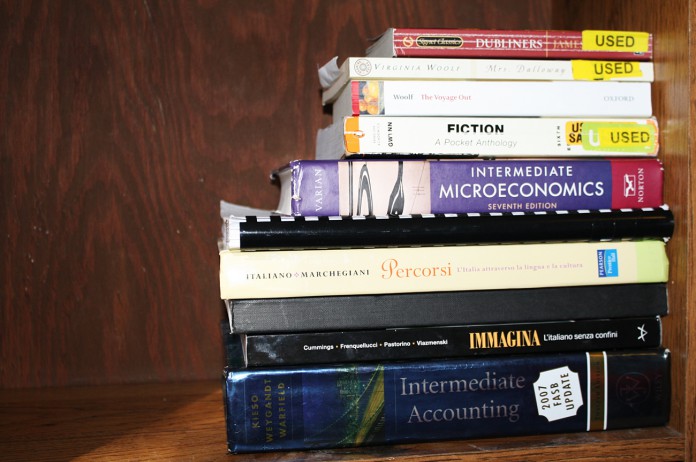 In college, textbook costs are overwhelming for students. The difference between choosing one of the consistently costliest majors and choosing one of the cheapest majors can total up to $1,230! For the following average book prices, it is assumed that college students take two classes for their major each quarter.

“As I learned in Econ 1, there is no such thing as a free lunch,” said Mia Giovanetti, a UCSB fourth-year Economics major.

Giovanetti has found that the importance of Economics textbooks is not in the writing, but the graphs.
“In most of my Econ classes, students barely ever use the textbook. The books are mostly for doing math problems and stuff,” said Giovanetti, “Econ textbooks are much easier to get on reserve at the library; there aren’t even any ‘reserve wars’ with other students.”

The Biology major is famous for its monstrous “OChem” textbook that haunts the dreams of even non-Bio majors.
“It is usually about $50 less to buy a used Biology textbook,” said Kristin Kulakowski, a UCSB fourth-year Molecular, Cellular and Developmental Biology major.

“One time [the bookstores] ran out of used books because it was a large class, so I had to buy a new book. If that happened now I’d probably go on Amazon and try to find it cheaper.”

This sentiment is one expressed by many upperclassmen. But there are still many websites to help students find better deals, such as the textbook comparison site swoopthat.com and student book exchange websites like uloop.com.
Biology majors spend an average of $221 per quarter on textbooks and a whopping $1,906 altogether.

The Mathematics major requires 87 to 89 units to complete the Bachelor of Science degree.

The Psychology major requires that students spend about $196 per quarter on textbooks, but they also have only 56 units to complete for the completion of their major. A student of Psychology, on average, will only spend a total of $1,373 on textbooks.
“Many of my books for psych have been custom editions, which means they are more expensive and the bookstore will not buy them back until the professor teaches that class again,” said Ali Webb, a UCSB fourth-year Psychology major. “By the time that rolls around, I’ve forgotten I even own the book.”

In terms of time, psychology is not as costly either—most Psychology courses are only a little over an hour twice a week, and only Psychology 5 and any Psychology lab courses have mandatory sections.

Global Studies courses tend to use readers rather than textbooks, which lowers the average quarterly cost to $149. The Global and International Studies major has unique requirements. Fifty-two units are courses for the major, as well as six quarters of one language and three additional quarters of the same or of a different language is required for graduation. Most students are able to test out of a fair number of the language courses, but either way, the total amount of units taken (and therefore books purchased) differs from student to student in this major.

“Thanks to taking a language in high school, I tested out of French 1, 2, and 3,” said Caroline Rowland, a UCSB fourth-year Global Studies major, “The cost of the language textbooks really add up. The textbooks for Italian 1, 2 and 3 was $300!”

The average total amount spent on textbooks for a Global major is $969 dollars, with the course readers keeping it in the triple digits.

The Communication major is 56 units, and books average $141 a quarter, totaling $987 by the completion of the major.
“Usually there is one text per class between $20 and $100,” said Kelly Jaeger, a UCSB fourth-year Communication major. “But there are also classes which do not require a textbook, or that require a thick reader.”

When looking on UCSB’s registration website, GOLD, of all the courses listed for spring quarter, six courses do not require any textbooks, but the information does not mention if courses require readers.

English majors spend a quarterly average of $123 each quarter, totaling $861 upon graduation. In the end, English is by far the least costly of all the majors.

“The English major does not require any textbooks,” said Michelle Davidson, a UCSB fourth-year English major. “The main required readings are paperback books.”

The downside to these optimistic textbook prices are the buyback rates, which are sometimes less than one dollar, whereas textbooks in other majors can be sold back for up to $70.

Having course books on reserve at the library to save students the expense of buying books is not necessarily a helpful option.
“Every time I have tried [to get a book on reserve], the book is being used by another student,” said Webb. “Professors often put one or two books on reserve and they are issued out on an hourly or bihourly basis. If ten students a day use a book on reserve, the book would be unavailable to other students for up to 20 hours a day; it isn’t a reliable option for me.”

College education is expensive, regardless of major choice. Check online to find discounts and look for other students who need quick cash and are selling their books cheaply.