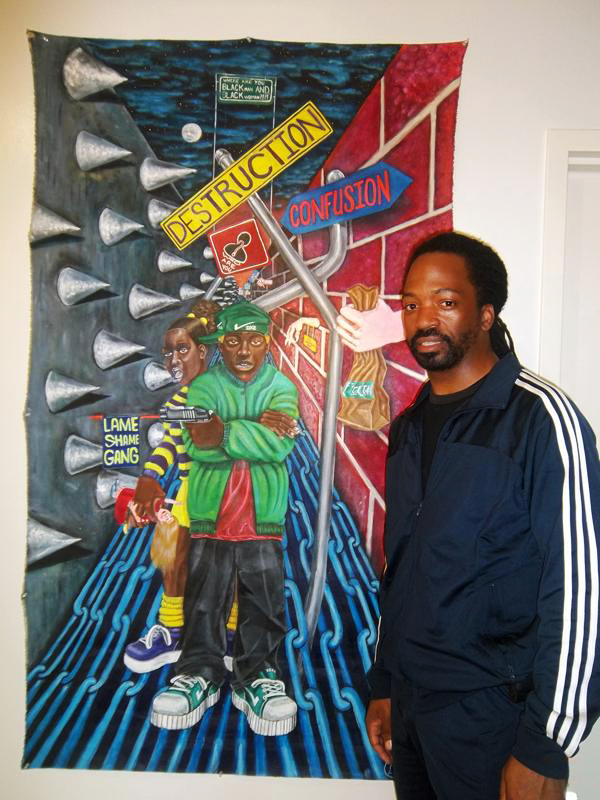 San Francisco artist Malik Seneferu greeted students and visitors with an enlightening dialogue at the Multi-Cultural Center on Monday, January 31.

“ I came from an ugly environment, where people are told they’re ugly,” said Seneferu.

While speaking about his impoverished upbringing in San Francisco’s Hunters Point district, Seneferu offered wisdom for others on how to elevate one’s self out of such dire circumstance.

“No matter how hard you have it, you can create your way out of it,” he said.

This ethos is captured eloquently in his painting, “Kujichagulia.” Kujichagulia, a Swahili term for self-determination, is one painting in Seneferu’s “Raw Series.” Painted on a raw canvas about seven feet across, “Kujichagulia” depicts the transformation of a black fetus into a man gliding over a cotton field with an American flag with question marks instead of stars soaring in the background. It is a painting comprised of fractured moments that work together as a whole.

Seneferu calls this piece one of his intense realties that is hard to look at. He described his process of just taking directly to the canvas to see what would come out of the interaction and not pre-meditating on his paintings.

Seneferu’s “Aesthetic Ascension” depicts an African warrior donning a tribal mask standing in waves with swimming fish. The pastel painting also makes use of decorative and elaborate symbols—just one of the primitive writing systems Seneferu incorporates into his imagery.

“This is one of my visions of Africa I imagined when I was a child,” said Seneferu.

It wasn’t until adulthood that he finally got the chance to travel around Kenya.

“I’m really wowed by the amount of pieces displayed here in the MCC,” said UCSB fourth-year English Literature major Erich Tomkinson. “I really like Seneferu’s vibrant color schemes and the palette he works with on all these paintings.”

But some of the paintings weren’t bright, reflecting the harsh realities of growing up as a black male in the United States.

The most thought provoking of Seneferu’s works included paintings that referenced “COINTELPRO” (an acronym for Counter Intelligence Program), a series of covert operations by the FBI during the 1960s that included falsifying media reports, disrupting political organizations, and even assassination, such as the murder of Chicago Black Panther Party Leader Fred Hampton.

“Looking at his work you can really understand his perspective and where he comes from in life,” said UCSB third-year Economics/Accounting major Rose Collins.

Seneferu’s work is powerful, political, and unapologetic and will be on exhibition in the MCC until Friday, March 11.