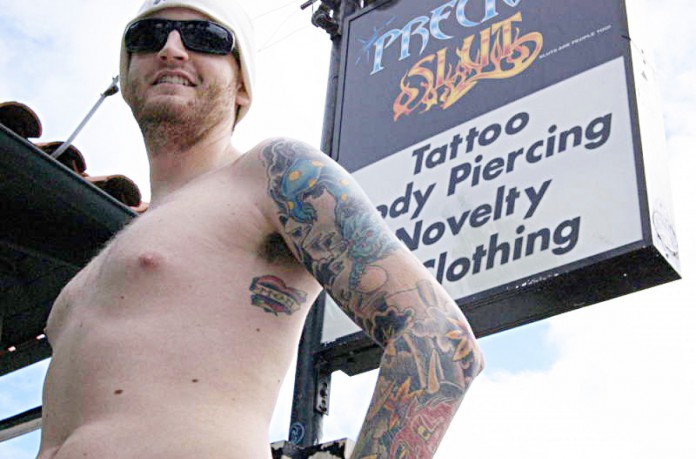 For Isla Vista’s student populace, Precious Slut tattoo and piercing shop stands as a beacon of tattoo culture in its most authentic sense. It encompasses the rebel attitude and in-your-face individual expression that has been associated with tattoos ever since the misfits and outcasts who were a part of 1960s counterculture made their initial imprint on the practice. Those pioneers forged the art form’s place in American society, making tattoos the mark of those who choose to live on the fringe of social norms.

But in recent decades, tattooing has become a more mainstream, acceptable practice. The popularity of television shows like TLC’s LA Ink reflects how tattooing has broken through the threshold of taboo into the realm of popular culture and this growing popularity has drastically changed the shape of tattoo culture. This is no exaggeration.

Twenty years ago, having a tattoo automatically connected you to social outcasts, but today, the most rapidly growing demographic in demand for tattoos is middle-aged women. Yes, that means Mom.

It just isn’t true anymore that having a tattoo makes you a rebel or in any way a part of that enticing world tattoos once represented. There is a new breed of tattoo enthusiasts who are staking out a new cultural territory for tattoos to have a place in. The hardcore, old schoolers are still out there, but should be distinguished from the leagues of trend followers that are emerging.

I visited Precious Slut to get the artists’ perspective on tattoo culture in Isla Vista. What I discovered was a top-notch, professional facility run by a group of closely knit co-workers and friends whose shop carries that old school punk rock attitude that was once exclusively associated with tattoos. There was an easy consensus among them.

“We are tattoo culture in Isla Vista. Beyond these doors it just doesn’t exist,” said Schmoe, one of the artists working at Precious Slut who specializes in photorealistic black and white portraits. “I’m from Oakland and artists used to turn and pray to Oakland five times a day, that’s how powerful tattoo culture is down there. Here, it’s just sad.”

Another artist, known as Jinx, said Isla Vista is full of wanna-bes.
“It’s about being an outcast by choice, and those guys just don’t have the intention. A lot of kids here in IV are posers—just the truth. Getting a tattoo seems to be much more like a way of rebelling against mom and dad for them,” said Jinx.

The opinions from inside this world are clear, and in many cases definitely hold true. The average guy who gets a tribal mark on his ribs probably doesn’t have much understanding of the significance that mark once had for a small population of warrior islanders, but he does know it will impress the ladies at the beach.
But that’s exactly the point.
Tattoos have reached beyond their former social circles to new types of people and they have acquired new meaning and significance. What really needs to be said is that it’s the individual who makes the tattoo, not the other way around.
There is a multiplicity of purposes for getting inked among the tattooed population today. Some get traditional ethnic tattoos to celebrate their heritage, while others commemorate loved ones and idols by getting tattooed portraits of them. Then there are the people who just see it as just a fun way to add a little thrill to their lives. Tattooing as a practice has grown beyond being exclusively a symbol of social abrasiveness.
But the hardcore tattoo community who truly embrace that original, raw punk attitude is a world of its own, not to be mixed with the new breed of tattooed bodies.

Don’t get them wrong, the artists at Precious Slut are perfectly happy to give anyone a tattoo and actually see the rising popularity of tattoos as a positive thing. No one’s saying the practice itself should be reserved for a certain type of person; it’s just that for a person to be a part of that original subgroup of misfit spirits, you have to live the lifestyle.

“Things like money or the music you listen to have nothing to do with it,” Jinx said. “Our culture isn’t necessarily limited to people usually considered on the fringe of society. I knew rich kids who would break out of their houses at night and go panhandle for heroin money. That’s punk rock. That’s the attitude that shaped what tattoos once exclusively represented in this country.”

Equating the new wave of tattoo enthusiasts to the people who embrace the traditional aspects of tattoo culture is like saying that the pop-punk trio Green Day occupies the same cultural space as the hardcore punk band Black Flag: the two have similar roots and influences, but reside in totally different places in music and appeal to different types of people.

As mainstream-minded individuals dabble in getting inked, they naturally turn it into something that best suits their purposes.
Schmoe compared what people see while watching LA Ink, the epitome of a pop culture shop, to his experience working in cities with more prevalent, conventional tattoo culture.
“LA Ink is not a real tattoo shop in the true sense. They couldn’t show what really goes on in a tattoo shop on TV—it would have to be Pay Per View. I had a guy come in and get some work done and when he looked in the mirror he thought it was done backwards and ripped the faucet of the sink. That’s the world we choose to live in,” Schmoe said.

In other words, old school, authentic tattoo culture is in a league of its own and while it’s wonderful that the rest of us are now experiencing this art form in our own way, the art doesn’t retain same meaning without the lifestyle.

Robert Telles, a second-year Political Science Major at UCSB, is part of the new breed of tattoo enthusiasts and his attitude reflects many out there.

“I want to get ‘My mind as my weapon’ on my chest.” He said. “I just see it as a way of expressing yourself. That phrase means something to me and committing to getting it permanently displayed on my body reinforces that meaning, makes it stronger.”

Telles doesn’t seek to make any rebellious social statement and he’s not about to start living life on the fringe; he’s getting a tattoo that reflects his lifestyle and attitude.

When asked about what his tattoos meant, Schmoe said, “My tattoos don’t mean shit! My tattoos mean I was bored in a tattoo shop and messed around a bit.”

Perhaps without him even realizing it, Schmoe’s carefree, reckless approach to his tattoos perfectly encapsulates the “screw it” attitude that surrounds traditional tattoo culture. His ink says he does what he wants when he wants and he doesn’t apologize for any of it. His tattoos’ lack of planned purpose reflects the push for chaos that defines the heart of tattoo culture in America, and in many ways illustrates the intrigue that inspired newcomers to participate.

The mainstream public wants a little piece of the tantalizing aura that surrounds tattoos because of the lifestyles they are associated with, and in the process the public gives tattoos new meaning. This trend points to the wonderful malleability of public perception in this country; a practice that was once black-labeled is now being appreciated on a grander scale and in more diverse ways.

I would also like to shed light on a rumor going around that anyone who gets the Precious Slut logo tattooed on his or her body gets it for free. It’s not true; I tried.