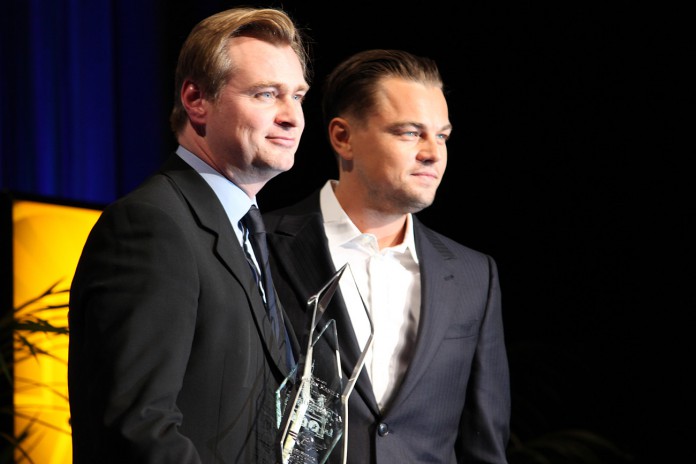 Nolan discussed his career and various aspects of filmmaking, after which Leonardo Dicaprio presented Nolan with the award.

Nolan’s serene, highly contemplative demeanor throughout the night reflected the care and attention to detail that he puts into his films, which tend to incorporate layered, complex plotlines and are often unapologetically intellectual.

“I don’t sit there and think ‘Oh I’m this special, unique person and no one would ever want to see a film like that.’ No, if I like an idea I trust that there will be an audience for it and that someone else will appreciate it too,” said Nolan. “There are a lot of companies that will embrace new, innovative ideas and ambitious projects.”

Admiration for Nolan hung thick in the air.

“I think a guy like that only comes along every once and a while. Every single one of his movies is so original and so powerful,” said UC Santa Barbara fourth-year Anthropology major and audience member Lindy Oliver Ramirez. “I couldn’t miss an opportunity to see such a special talent share his wisdom.”

Arlington Theater was the perfect venue for Nolan’s reception. Its unique interior, designed to look like a villa courtyard, added a distinctly Santa Barbara feel as well as an element of class to the ceremony.

Throughout the night it was interesting to hear about the difficulties Nolan encountered in his early stages of breaking into the industry, especially regarding the slow process of getting Memento into theaters.

“We were screening it for any company who would see it, but most people weren’t getting it. But there would always be one or two people who got it and I tried to hold on to those in my head, you know, as signs of hope it could eventually be received well, and eventually it was,” he said.

Nolan was pleased to be recognized for his achievements by SBIFF, one of the biggest film festivals in the world, and said that it was an encouragement to continue filmmaking.

“Hopefully my family will keep me from getting a big head from all this attention I’m getting,” joked Nolan.

Maybe a big head is in order for a man who has helped changed the course of filmmaking forever.

“He no longer challenges our ideas about film,” said DiCaprio of Nolan during his presentation speech. “He has helped define them.”