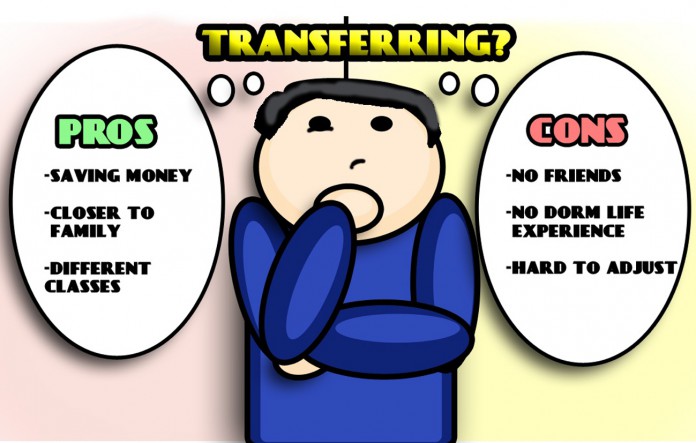 I came to UC Santa Barbara in August of last year as a transfer student from Northern California.

The first big mistake I made was moving in with my girlfriend at the time. Not only did this ruin my life for those seemingly endless nine months of torture, but it was extremely difficult to make friends when I lived with someone I already knew.

Although I do not envy anyone who tries to live with a stranger, transfer students must find a way to replicate the dorm experience that all freshmen have.

This is easier said than done. By the time students reach their third or fourth year in school, the more secluded their group of friends becomes, and the more newcomers fall into the “out-group.” It seems like the only people who need new friends are transfer students.

Being involved in campus groups helped me make friends, but finding “that best friend” is much more difficult than expected, and you need the personality type of an extrovert to be able to break into the cliques on and off campus. That may be the reason they call it a four year university—because you are supposed to go here for four years, find your clique during freshman year and stick with it.

The one thing that helped me mature quickly as an adult and as a student was moving out of my house for the first time. But when you move to a ghetto like Isla Vista there are certain things you don’t expect.

Let’s just say that you better pick the right house and the right roommates, and you better know how to use locks.

Transferring from a community college using a semester system to UC Santa Barbara, I had to adapt to the quarter system fast.

It used to be that I could get a low grade on the first paper or test and still catch up, maybe even still earn an “A” in the class by the time the semester was over. Well, not on the quarter system!

Every transfer student that I personally know, and there are about seven, has had a hard time adjusting in his or her first quarter, and it’s usually for one of the following reasons: He or she takes too many classes for his or her own good, he or she can’t adjust to the fast pace, or he or she can’t figure out how the teacher tests until after the drop deadline and end up doing poorly.

But it’s not like they are stupid people either.

All of them are now doing well and are maintaining multiple internships or jobs as well as succeeding in class. Adjusting to the style and speed of quarter system classes and time management are the most important factors.

“At a junior college, the tests are based on memorization rather than on critical thinking,” said transfer student and UCSB Psychology major Amy Maggard. “After switching into a research-based college like UCSB, when asked why something happens, the first answer that comes to many transfers’ heads is, “because it did,” or “who cares” because we were never really forced to think analytically.”

Lastly, as a transfer you have no choice but to continue with your major once you are accepted. Sure, I could stay an extra year if I decided to change, but with the fees we pay now, who would want to do that?

Once in the major—that is, if you get into the major and don’t get stuck in pre-major classes with high GPA requirements—you must jam-pack as many classes into the two years you have in order to finish on time. If I ever decided that I didn’t like my major, then I would be stuck here for another two years paying ridiculous rates, or I would be stuck with a piece of paper saying my degree at the top that I could care less about and will probably never use again in my life.

Choosing classes in your major and figuring out your requirements for graduation is a bit tricky as a transfer student. Having one day during summer where you find out how to use the online registration system, GOLD, and pick your classes is not sufficient. Offering a one-on-one session for students, for classes and registration, seems like an acceptable compromise to me.

The benefits of being a transfer student are tremendous, and I think they outweigh the cons, at least most of the time. But the stress I dealt with could have easily been dissipated through a little more information and a lot more communication between the University and the students.

Good thing I graduate in June.