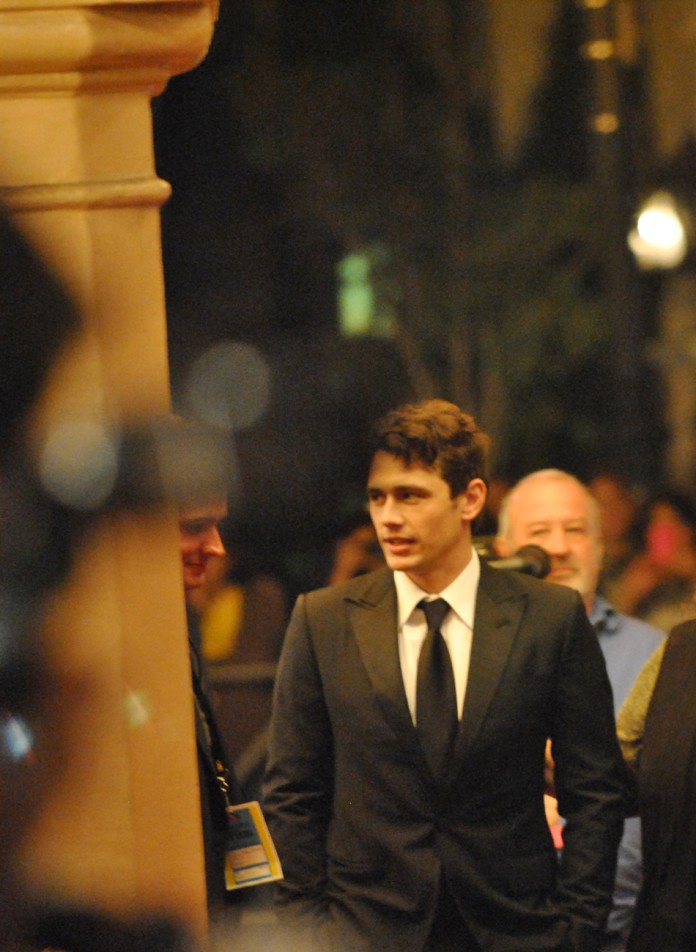 A hoard of hysterical—mostly female—fans greeted James Franco at this year’s Santa Barbara International Film Festival, cheering him on as he made his way to the red carpet at Arlington Theater on Saturday, January 29.

Franco appeased his idlers by taking time to sign autographs and take pictures around the perimeter of the event, even if it meant being a little late to the night’s ceremony. During the ceremony, Franco received the SBIFF Outstanding Performance of the Year Award for his career-transforming performance in the film 127 Hours, directed by Danny Boyle.

For those of you unaware of who James Franco is, he’s the guy on your girlfriend’s desktop background. His acting career has steadily been rising with his most popular roles to date as the loveable pot dealer Saul from Pineapple Express, his run as Harry Osborn in the Spiderman film series, and his supporting role along side Sean Penn in Milk.

Aside from these obvious successes, Franco’s career up to this point had made him out to be somewhat of a Hollywood pretty boy who had made a few poor career choices, but who also managed to gain a substantial female fan base. He also managed to become a part of some cult classic hits (Freaks and Geeks anyone?) along the way.

His dynamic portrayal of real-life mountain climber Aaron Ralston earned him recognition at SBIFF. Franco depicted Ralston’s amazing experience as a climber trapped inside a desert canyon who eventually amputated his arm in order to survive. The top notch performance catapulted Franco into a new realm of respectability as an actor, earning him mountains of critical appraisal and an Oscar nomination.

“I thought James Franco was amazing. I thought it would be obviously good to get to watch just him for an hour, but his acting was so believable and he can be really funny,” said Garcia.

Inside Arlington Theater, Franco sat down with Leonard Maltin in front of a packed house for an extensive, not to mention entertaining, Question and Answer session, complete with clips from Franco’s various films. The sly Franco charmed his audience with stories about his rise in the movie industry and the oftentimes humorous experiences he had along the way.

One of his more wild experiences occurred while working with Nicolas Cage.

After establishing himself as a legitimate working actor, Franco took an unexpected turn for a Hollywood star—he went back to school at UCLA (there is a very humorous picture of Franco sleeping in class at UCLA on the Internet that’s worth searching for).

Since then, he has attended several universities and is currently studying at Yale.

Franco seems to enjoy surprising people. His hilarious performance in Pineapple Express “turned a lot of heads” as Leonard Maltin put it, and his later work in Milk once again shook up his image, proving he could hang with legendary actors in serious dramatic roles.

His most recent quirky career move was his decision to join the cast of General Hospital, a popular soap opera, as serial killer Franco.

Seth Rogen presented Franco with the award. The two friends have known each other since they spent time working together on Judd Apatow’s cult classic TV show Freaks and Geeks.

During his speech, Rogen made many jokes at Franco’s expense.

“James Franco and I have never smoked weed together. That is just insane,” said Rogen. “I never should’ve let him play Saul, then surely I’d be sitting there being interviewed by Leonard Maltin and hosting the Oscars and he’d be standing here giving a speech.”