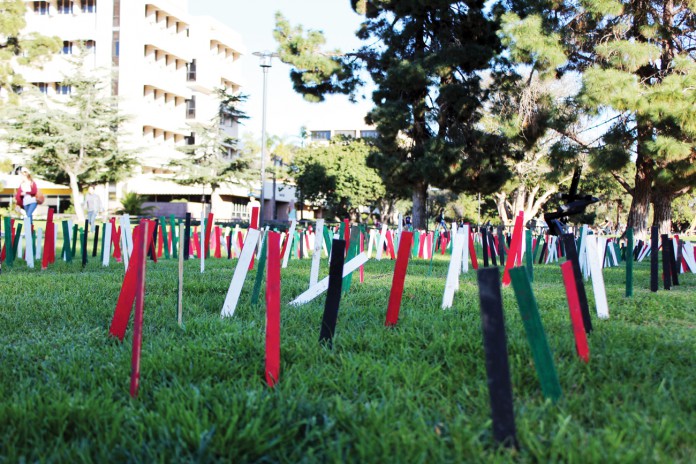 Ongoing tensions between Israel and Palestine extended to the UC Santa Barbara campus during last week’s Gaza Awareness Week when an annual display sponsored by UCSB student group Students for Justice in Palestine (SJP) sparked controversy among students and faculty.

While SJP hosted talks from journalist Alison Weir, human rights activist Yonatan Mallinger showed the documentary To Shoot an Elephant and a candlelit vigil was held. The on-campus display is likely to have caused the most upset.

The display consisted of a large sign featuring the death toll of Operation “Cast Lead,” a 22-day Israeli military offensive that killed more Palestinians and destroyed more properties than any previous Israeli offensive. The mission began on December 27, 2008 to end rocket attacks launched by groups affiliated with Hamas and other Palestinian factions. The conflict came to an end on January 18, 2009 when unilateral ceasefires were announced by both Hamas and Israel.

The sign on campus was accompanied by a display of wooden stakes painted in national colors to represent fallen citizens from each side of the conflict. It proclaimed the death of over 1,400 Palestinians and 13 Israelis, according to Amnesty International.

SJP set up the same display last year and was vandalized, although the culprit was never found.

This year, the group kept a member on guard overnight to protect the display from damage. This precaution prevented the same extent of damage that occurred last year, but vandals still tried to steal the sign during daylight hours.

SJP later found the sign hidden behind a nearby building and returned it to its original display location.

Anonymous students taped anti-Semitic political cartoons next to SJP’s fliers and on the doors of event rooms. Members of SJP removed the cartoons when they discovered them.

“The display was successful because it gave the university community something to think about—something beyond our little bubble here in [Santa Barbara],” said UCSB second-year and member of SJP Noor Aljawad.

Abraham Gean, the President of UCSB’s American Students for Israel, disagrees. He said that Gaza Awareness Week failed to acknowledge the “real” problem in Gaza—a problem that he believes is more centered on Hamas.

Gean said the display took the focus off of Hamas and that it did not help better the situation of the Palestinians.

Jaret Ornelas, a member of SJP, objects to that statement.

Ornelas said SJP is an organization that supports people, not governments.

Members of SJP also contest the notion that the display was inconsiderate in its treatment of fallen soldiers.

But other students felt that the display showed favoritism.

“The way it was presented made it seem like they were valuing some lives over others—a life is a life, and it seems wrong to write off thirteen Israeli deaths as if they count for less in smaller numbers,” said UCSB fourth-year Art Studio major Lauren Bailey.

Ornelas also said that SJP condemned the killings of 23 people in Israel by rockets from Gaza.

“Our point is that since all life is equally precious, how is it justifiable to kill hundreds of times more Palestinian civilians in the span of three weeks than what has been done in nine years,” said Ornelas.

SJP’s display prompted some students to complain to the Office of Student Life (OSL) about it being permitted on campus.

Shortly afterward, OSL contacted SJP and informed them that the club would be fined $50 if the display was not removed from the bike route due to safety precautions.

Aljawad said that SJP was specifically targeted. She believes that the request to remove the display was due to complaints about the content.

Aljawad described OSL’s request as a case of “selective policy that is only enforced when controversial messages are conveyed.”

Katya Armistead, the Assistant Dean of Students from OSL, said that campus regulations require all displays to be clear of bike paths for safety reasons. Armistead said that there were over fifteen students severely injured in bicycle accidents in the past three years, many of which could have been prevented.

SJP was not fined after moving the display to a safer location.