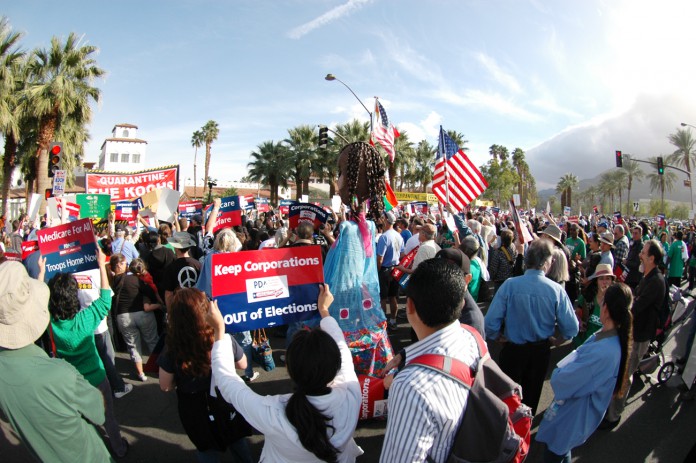 Students from across southern California came together in Rancho Mirage, California to rally against the Koch Brothers and Corporate Personhood on Sunday, January 30.

Prior to the rally, Common Cause, a group that was started to give citizens a voice in politics, hosted a panel called “Uncloaking the Kochs.” On the panel were former Green Jobs advisor under the Obama administration and co-founder of multiple non-profit organizations Van Jones, Law Professor at UC Irvine Erwin Chemerinsky, Political Researcher Lee Fang and DeAnn McEwen, President of the California Nurses Association.

Between the panel and the protest, a makeshift stage was created on the back of a truck. People stood on the “stage” and shared personal stories of how the Koch brothers and corporate personhood deeply hurt their lives, including stories of lost jobs and homes.

Directly after the rally, protesters gathered in front of the hotel where the Koch Brothers were having their bi-annual “billionaires’ caucus.” During the protest, which lasted a few hours, a handful of protesting students were arrested.

The protest was planned and streets were blocked off ahead of time. Rows of officers in helmets with battery sticks in hand stood in front of the building that the Koch brothers were holding their meeting.

When questioned about expectations or asked for comments all officers simply replied “no comment”. Protesters chanted the entirety of the protest until they were repeated warned by an officer in a firm tone to retreat and stop obstructing traffic.

Corie Radka, a recent Environmental Studies and Zoology graduate of UCSB, was at the rally with the California Student Sustainability Coalition (CSSC) and members of UCSB’s Environmental Affairs Board (EAB).

“Initially I was shocked. It doesn’t make sense, corporations shouldn’t have that right,” said Radka. “[Corporate personhood] is the root of many of the environmental and social issues that EAB has campaigns on.”