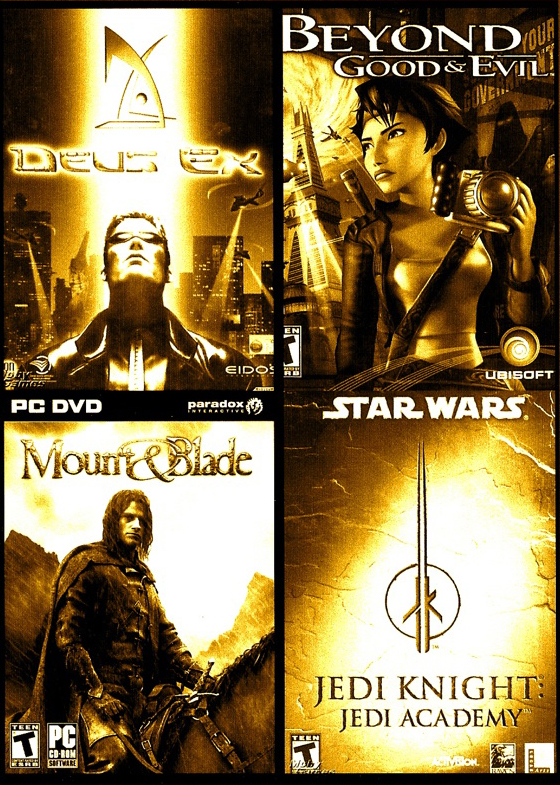 A game does not have to be insanely popular to be worthwhile. There are many games that do not get the attention they deserve for a number of reasons: poor sales, poor advertising, or simply being overshadowed by other titles. Here are a few underrated games (in no particular order) that you should definitely check out!

Deus Ex, developed by Ion Storm, was one of the earliest FPS/RPG hybrids. Its lead designer was the infamous Warren Spector, who has designed a number of innovative games such as Thief: The Dark Project, System Shock, and recently Epic Mickey. Spector’s primary goal for Deus Ex was to integrate an expansive choice system which would affect the game’s narrative and provide tons of replay value. The result was an intricate narrative and a great deal of gameplay variety, which included stealth, combat and the dialogue system. The plot was intelligent and labyrinthine: it involved gang warfare, terrorist organizations, and conspiracy theories such as the Illuminati and Area 51. The setting was dystopian and futuristic, with nanotechnology and human enhancement being prominent themes. Many levels were also stylized versions of real cities (Hong Kong, New York, Paris) and the environment was so open that Deus Ex is often labeled as a sandbox game. The game also encouraged environment interaction down to the tiniest detail.You could flush toilets for fun, snack on a bag of chips to regain health, pick up a newspaper off the street for back story, or hack a terminal to read people’s e-mails for information.

Deus Ex also featured missions that could be tackled in a number of ways. For example, you could enter a room with guns blazing through the front door, stealthily through the vents, or you could hack the security system. There is a huge variety of weapons (there are different types of pistols, melee weapons, rifles, shotguns, rocket launchers, grenades, even a hand crossbow) and every weapon has multiple types of ammunition which can be used for different situations, such as armor piercing for turrets. Guns are highly modifiable through the addition of laser sights, silencers and scopes. The RPG elements include a weapon inventory system, a skill system for leveling up weapons and hacking skills, an economy system for purchasing weapons from NPC’s and some minor character customization. With an atmospheric open environment, intricate choice system and dialog system, Deus Ex offers 20 hours of gameplay or more. There has since been a sequel, Deus Ex: Invisible War, which did not live up to the first game but is still worth playing. The new upcoming sequel, Deus Ex 3: Human Revolution, is anticipated for release later this year.

Beyond Good and Evil was conceptualized by Michel Anchel (creator of Rayman) who initially wanted the game to be a trilogy. It is an action-adventure game which features varied gameplay (stealth, melee combat, platforming, puzzles), a memorable cast of heroes, and a unique setting that includes fantasy, steampunk, and cyberpunk elements. One of the best aspects of the game is the main character, Jade. Her appearance is refreshing: she has tanned skin, short black hair, green eyes, and she wears a jacket and baggy pants – a complete 180 from the standard oversexed scantily-clad female protagonist. Jade’s sidekicks are equally refreshing: a tough-talking pig named Uncle Pey’j and a loyal, sometimes absent-minded spy, Double H. The plot involved uncovering a conspiracy involving spies, kidnapping, and aliens.

Beyond Good and Evil features an inspiring interpretation of hack ‘n’ slash combat with Jade’s dai-jo staff, which can be used as a melee weapon and perform special attacks with the aid of a sidekick. The combat is fast-paced, the controls are simple, and fights are greatly enhanced with a kick-ass electronic soundtrack. The interactions with your sidekicks are also very interesting: there are many obstacles that require a sidekick’s help to overcome, and in combat your sidekick’s AI is actually competent (imagine that!). The environment is open and water-based (you travel between destinations in a hovercraft) and there are plenty of hidden caves and doors to explore. The game also has impressive mini-games and side-quests (racing, thief-catching, photographing animals) that allow you to earn money and valuable items, but exploration alone will keep you occupied for hours.

If you want to know why Beyond Good and Evil is so underrated, just compare its release date (November 11, 2003) with the release date of Prince of Persia: The Sands of Time (November 21, 2003). Both games were published by Ubisoft, but Prince of Persia skyrocketed in popularity and left this little gem behind in the dust — easily making it one of the most underrated games of all time.

Mount & Blade, developed by TaleWorlds and published by Paradox Interactive, was an independent game initially started by a husband and wife. It was an open-ended single player RPG which featured a very realistic medieval time setting as well as very realistic combat. There were no fantasy elements such as healing potions, magic, or monsters. In the beginning, the game gives you a clean slate: you are free to perform a variety of actions (build an army, raid villages, word for a faction, quest, etc) and choose from five unique factions.

The game features a directional melee combat system. The player aims attacks (left, right, up, down) by pressing and holding the mouse button while moving it in the desired direction and then releasing. The weapons were also extremely realistic as swings were physics based, which meant that damage was determined by the specific speed and weight of the weapon. For example, pikes were slow but had a lot of range, and axes were short but delivered powerful damage. Another huge implement was the mounted combat system which was the focus of the game. Horses had realistic movement and physics (they would be affected by the environment; water would slow them down, etc). Players could ram people with their horses, which was awesome. The AI was also very impressive compared to most.

There has been a stand-alone expansion released called Mount & Blade: Warbands which has improved visuals, AI and multiplayer. Mount & Blade is a realistic RPG which features physics-based mounted and melee combat and an open-ended world. It is highly recommended for RPG fans and gamers that enjoy a more realistic setting.

The one dream of every Star Wars fan is to wield a lightsaber, but surprisngly most Star Wars games do not include lightsaber combat. Jedi Academy is the sequel to Star Wars Jedi Knight 2: Jedi Outcast (2002), and along with its predecessor is one of the first Star Wars games to prominently feature third-person lightsaber combat. It had a rather underwhelming single player campaign and the multiplayer was nothing special, but dueling and free-for-alls made it worthwhile. It also featured an extensive force power system. However, the game is flawed: The single-player campaign was unimpressive, the level design was dull, the voice-acting left a lot to be desired, and the narrative was hindered by poor writing. The multiplayer also had its share of imperfections: attacks varied too much in damage (you can sometimes kill someone in one hit and sometimes barely scratch them), and the force power system was unbalanced (but it is still a unique feature).

On the bright side, Jedi Academy expanded on the gameplay for Jedi Knight 2, adding two new saber-styles in addition to Single Saber: Dual Sabers and Saber Staff. It also added more lightsaber moves for Single and more acrobatics such as grabbing and jumping off walls. It also added two new multiplayer modes: Power Duels (2v1 duels) and Siege Mode.

It was developed on the Quake engine which made it VERY modifiable — in fact there are still mods being created to this day, and there is a loyal community that supports the game and craves a sequel.

Star Wars Jedi Knight: Jedi Academy has been overshadowed by other Star Wars titles such as Force Unleashed and Battlefront 2, but none of them have ever matched Jedi Academy’s unique combat system. In spite of its flaws Jedi Academy is an enjoyable game, and it is a must-play for Star Wars fans.

Here are my picks. I know there are a lot of underrated games out there — what games do you think deserve mention?