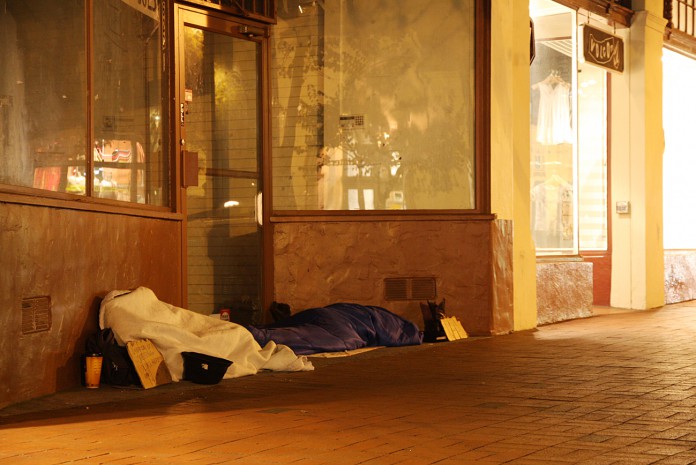 Common Ground Santa Barbara is part of the national organization assisting 100,000 homeless people in finding homes by 2013 and helping them keep their homes. Local volunteers conducted a face-to-face survey—the Vulnerability Index Survey—including questions about homeless routines and history. The survey will take place from Monday, February 28 to Tuesday, March 1.

“Common Ground is a great effort. I think it will be successful and it is necessary. The only way you can convince government that there is a need for government services is [through] data,” representative of Transition House, a Santa Barbara homeless shelter for families, and Common Ground Representative Kathleen Baushke said.
Through this survey, Santa Barbara will gain accurate information about the local homeless community.

According to Common Ground, about 110,000 people are “chronically homeless.” Side effects of being homeless are similar to a form of cancer because living on the streets cuts off about 25 years of a person’s life.

“There were 32 deaths last year in Santa Barbara; there should not be homeless individuals dying on our streets,” Alice Villarreal Redit, a representative from the Housing Authority of the City of Santa Barbara and Common Ground Representative said.

Common Ground was brought to the Santa Barbara County in December 2010 and Redit hopes this organization is successful because homelessness is an issue for the county. To end homelessness, Common Ground starts with Registry Week.

“Registry Week is the first part of the campaign and is very important because the volunteers will be face-to-face gathering information [from the homeless]. Then it is matter of what we do with that information. This campaign does not end in the first week of March,” Redit said.

Registry Week and the 100,000 Homes Initiative were introduced to the public in a Common Ground briefing where local government, businesses and non-profits discussed the goals of the Vulnerability Index Survey on Thursday, February 3.

“We didn’t get any negative reaction at the briefing. I think one of the most important pieces of information people in the community are looking for is accuracy,” Shaffer said. “They want to know how many [of the people without homes] are citizens, veterans, children, women. With the interviews, we are going to get more accurate information.”

Shaffer said the city is required to do a count every two years of the homeless population, but this is the first time a Vulnerability Index will be done for more detailed information.

“The count goes beyond just trying to gather the number of homeless people. The Vulnerability Index Survey will help determine those who will be most likely to die if they continue living on the streets and aren’t placed in housing,” Baushke said.
Common Ground Santa Barbara hopes to house the most vulnerable people within a month after the survey is completed and help them attain social services to help them keep their homes.

“The housing is just one part of it. There’s another team part of the social services to ensure peoples success [in remaining in the homes]. The success will vary by individuals,” Redit said. “We’re going to bring whatever resources we can to the table so that folks are supported in ongoing manners. That might include case management, counseling, disability benefits, vocational training.”

Redit says there will be housing options such as a one bedroom apartment, an apartment with a group of people, a studio apartment, or homeless shelters. Much also depends on where apartment complexes are available and how open the people without homes are to the idea of moving into a home. People can be placed anywhere county-wise and can even be reunited with their families if they wish.

In the beginning, Common Ground will help those that are in most critical conditions.

But Baushke said that after housing the most vulnerable homeless, Common Ground can also look to provide social or mental services to the other homeless who participate in the survey.
Earlier this year downtown Santa Barbara wanted to reduce the visibility of homelessness. Fifty thousand dollars were supposed to be spent on moving the street benches to a 90 degree angle and removing the back rests of benches to make sleeping on the benches uncomfortable for the homeless at night.

“The city council voted to defer [the 50,000 dollars allocated to spend on adjusting the benches] for another year, given the budget,” Redit said.

Redit does not think adjusting the benches is an efficient use of the money and does not believe it will create an impact on ending homelessness.
“Destroying benches and [moving] the benches are not in the friendly spirit as putting them into houses,” UC Santa Barbara third-year Economics and Accounting major John Salt said.

Political leaders are joining Common Ground and Redit believes once the survey is complete that the community can find better use for that 50,000 dollars.
“I think there are better solutions [to remove the visibility of homelessness than that]. Fifty thousand dollars could be used for mental health treatment and other things. It would pay for two mental health workers to help [people without homes] find the right place to go, but that’s the tragedy,” said Shaffer.

Baushke says three-fourths of funding for housing the homeless is from individual or private foundations locally and non-profits while one-fourth of the funding comes from government sources. Shaffer also hopes that the Common Ground experience and Vulnerability Index Survey will help the city change its budget and place more money toward helping the homeless community get off the streets in a long-term way.

“If you read our local paper, homelessness is a hot issue in every city because homelessness in metropolitan areas has grown since recession began,” Baushke said.
Baushke works with families who are homeless who need a little help to get them back on their feet again.

“When families come to Transition House, we provide them with case management we help them find work, learn to manage their money and provide child care and activities for their kids and the family unit gets strengthen again once they come here,” she said.

As of February 17, Common Ground Santa Barbara has 297 volunteers and the number is still rising.

“We want to change the face of homelessness. College students are relatively passionate about justice and it’s a chance for them to do something about and not just read about it. I would love to see a lot of them just get out there [and take part in the vulnerability index],” Shaffer said.

Volunteers may choose to be a part of the effort through activities such as making packets and taking photos. Registry Week lasts for three days, but volunteers are not expected to volunteer all three days.

“Six people already died in Santa Barbara this year. It’s a horrid statistic considering it doesn’t freeze here, like it does in Chicago. We need to do something about [this],” Baushke said.