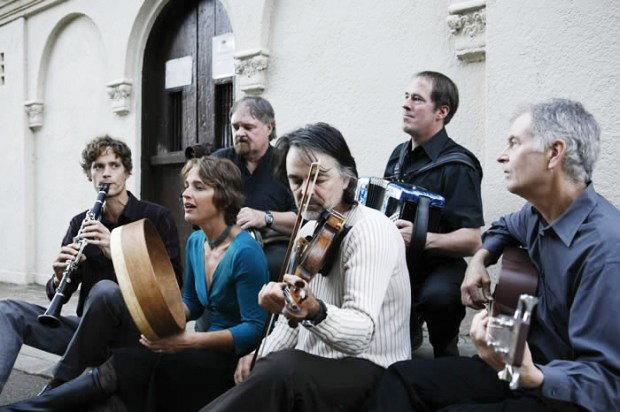 Janam created a dynamic atmosphere that shifted enjoyably from sharp and technically impressive instrumentation to gentle, meditative ballads. Gary Hegedus’ skillful care in playing the oud (an eleven-stringed instrument with no frets and a body like half a watermelon) and Dan Auvil’s rhythmic mastery of a traditional drum called the tupan, mixed with the serpentine sounds produced by Peter Jaques on clarinet and topped off with Juliana Graffagna’s beautifully melancholic voice contributed to the band’s uniqueness.
“They take sounds as disparate as Appalachian folk, mix it with Middle Eastern instruments and structure them around tunes from Albania and Greece. They’re doing what they like, a mash-up,” said audience member and Santa Barbara engineer Debbie Becker.
And Janam’s mash-up worked beautifully, with each piece falling delicately into place and complementing the others (despite the band lacking their accordionist, Tom Farris, due to illness).

Throughout the evening, Janam played songs from Turkey, Greece, Macedonia and even a song by Emmylou Harris, showcasing the band’s tonal variety and Graffagna’s voicing of airy lyrics in six different languages.

Despite the multiple languages and areas of influence heard in the band’s music, the evening’s performance was cohesive and felt very rooted in the need for a particular sound.

“What attracts me to Balkan music is that it’s from the earth; farmer’s music,” said Robert Vickery, a local musician and aficionado of Eastern European music. “It’s accessible to everyone.”

Janam’s beats got audience members off their seats and onto the dance floor.

“You can also dance if you’d like,” suggested Graffagna as she introduced an up-tempo song.

Not long after, a chipper group of audience members wove their way out of their seats and into a line. The dancers worked their way to the front of the stage and enthusiastically side-stepped to the complex rhythms.

Vickery, who joined in the dancing, said Middle Eastern dancers go to many such shows together and support the musicians with their knowledge of different dance styles and a willingness to participate.

“In Macedonia [and] the Balkans, everyone dances, everyone sings, at picnics and in the streets—the music is everywhere and everyone participates,” Vickery said.

“The rhythm is something very representative of Balkan music that we don’t have here,” said Graffagna.
Of course there are similarities as well, which tie together the different styles of music together in a deeper way than rhythms or scales.

“A lot of the subject matter of the Baltic songs are dramatic or tragedy-driven but in general I think that’s what people write about: you write when you’re in pain or when you’re in ecstasy. A lot of subjects are universal,” continued Graffagna.

Like this universality in songs, the overwhelming effect of Janam’s performance was one of seamless and beautiful integration of many elements which, despite disparate natures, come together harmoniously in the skillful hands of the musicians.