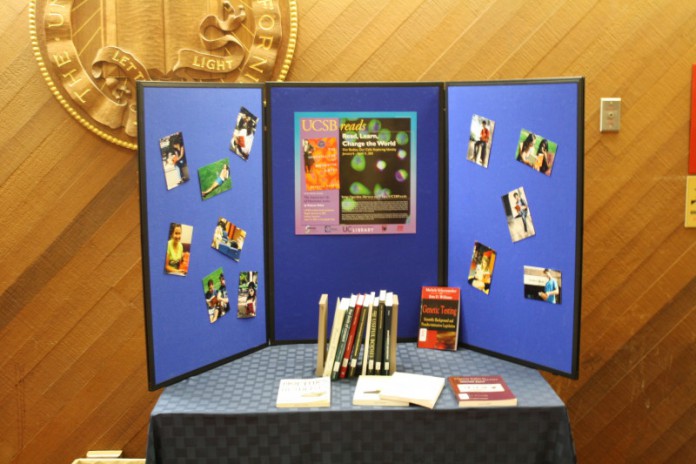 The UCSB Reads program distributed over 2,000 free copies of the book The Immortal Life of Henrietta Lacks by Rebecca Skloot to long lines of eager students in the Davidson Library this month.

Starting in 2007, UCSB Reads has been a collaborative effort between the UCSB Library and the Office of the Executive Vice Chancellor to encourage reading and intellectual discussion among the Santa Barbara community.

With the help of its sponsors, the program extends its reach beyond the UCSB campus to SBCC and the greater Santa Barbara community by supplying free copies of specifically selected books to students as well as to instructors who are willing to incorporate the books into their course material. The popularity of the giveaway demonstrates the program’s effectiveness in generating greater interest for the library and for reading in general.

“There are a lot of cynical people out there who claim that college students are not intellectually curious or book-minded, but it’s reassuring to see hundreds of people line up and wait for over an hour to get their hands on a great book,” said Library Administrator Brian Matthews.

In order to appeal to as many people as possible, UCSB Reads generally selects a book that covers a current, important issue that is also fairly broad in scope. The selected theme for this year is “Our Bodies, Our Cells: Exploring Identity.”
The Immortal Life of Henrietta Lacks was chosen from over 450 title suggestions from faculty and students. It tells the story of a woman whose cells were taken without her consent, Henrietta Lacks, and how this led to great advances in genetic knowledge. The book shows how influential Lacks’ cells have been to developments made in research on cancer treatment while incorporating racial history and issues surrounding individual human rights.

Scott Emrick, a fourth-year History Major at UCSB, was assigned to read the book for his History of Public Health course.

“The book seems really flexible as far as what fields of study it applies to. It has a strong historical element so it fits right in with what our class is learning, but I could easily see it being used in a Bio or Chem class since it deals with advances in cell research,” he said.

But many students came to get a copy of the book out of personal interest, and not because of a class requirement. Second-year Political Science major Robert Telles just happened to stumble on the book giveaway, but his interest in the book grew from there.

“I walked into the Library on Thursday morning and saw this huge line, so right away I was curious. But then someone told me they were giving away something for free and I was like ‘I’m on that!’” said Telles. “Once I got home and actually checked the book out I really liked it, so now I’m just going to read it for fun.”

UCSB Reads’ outreach efforts go beyond the initial giveaway. In order to encourage more discourse on The Immortal Life of Henrietta Lacks, there will be two “community conversations” held in the library on February 2 and February 15 at 12 p.m. UCSB faculty and grad students will be leading discussions on the book and its topics.

Additionally, an “Identity Tree” is posted on the first floor of the library. Students are encouraged to add their own fingerprint leaf to illustrate the book’s theme of identity.

To top these events off, the book’s author, Rebecca Skloot, will make an appearance on campus on April 11, 2011 in Campbell Hall at 8 p.m. There will be a five-dollar entrance fee.

Matthews explained the thought processes behind the extra events that are being organized.

“Reading is kind of a lonely exercise, but when thousands of people are reading the same book and reflecting and talking about it, it makes you feel more interconnected,” he said.

For more information, follow the UCSB Reads Twitter feed and be on the lookout for future giveaways from UCSB Reads.