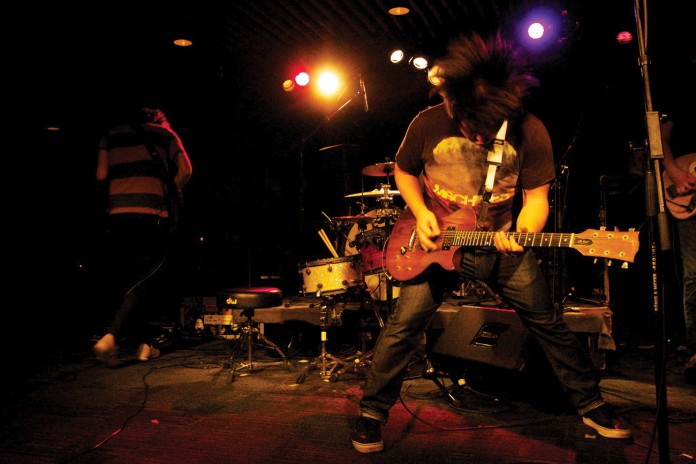 The genre-ambiguous band Rx Bandits gave the UCSB campus a healthy dose of musical entertainment on Friday, January 14 when they performed for an array of students and fans at the University Center Hub. The show was one stop on the band’s current tour promoting their latest album, titled Mandala.

In addition to playing songs from the new album that the band described on their official website as “a complete and masterfully detailed mosaic,” audience members were also treated to songs off of previous albums, namely …And the Battle Begun, The Resignation, and Progress.

The Bandits may have come off as performers of a somewhat haphazard mixture of genres to a first-time listener; but to the veteran listener and enthusiast of unconventional music, the concert was more like a conglomerate of unorthodox, aural brilliance.

To open the show, the Bandits performed “Mastering the List,” a song from Resignation that featured isolated and highly technical guitar riffs. The song followed a 40-minute performance by Spartacus, an alternative rock band from Oxnard.

Rx Bandits member Matt Embree, writer of every song on Mandala, emanated passion and intensity that practically dripped like morphine from an IV into the audience. His incredible vocal power and range, coupled with his enthusiastic stage presence, reverberated throughout the Hub with musical potency.

But the spotlight wasn’t solely on at Embree—all four members of the quartet showcased their undeniable talent and uncanny ability to maintain cohesiveness amidst the nearly schizophrenic beats laid down by drummer Chris Tsagakis, who gave an improvised and long drum solo at the end of the show with ease.

Following the opening number, the Bandits played “Only for the Night,” a song from …And the Battle Begun that emphasized the laid-back reggae influences of the band in the opening stanzas before erupting into guitar-heavy music during the chorus. Other numbers included the anti-war song from Progress called “In All Rwanda’s Glory,” “My Lonesome Only Friend,” a song off Mandala that punctuated downbeats and showcased Embree’s ability to hit high notes, and “…And the Battle Begun,” which gradually crept up on the audience through
Embree’s ethereal voice layered over a minimalistic drumbeat and soft chords like sonic tiramisu, all before abandoning the mellow sound for a strong rock beat at the chorus.

“My favorite part of the night is when they performed ‘Apparition,’” Mike Chen, a 2004 UCSB alumnus who attended the concert, said. “Even though the musician in me absolutely devours the technical and progressive aspect of their music, ‘Apparition’ is a wonderfully simplistically written song with the perfect balance of melody and groove that you just can’t help but to dance and sing along to.”

Unlike their previous shows, there were no horns featured during the concert as a result of the band’s revised sound. The change was only one of many that the Bandits implemented recently in order to branch out beyond their ska/reggae roots.

Additionally, they changed the name of their record label from MDB Records to the MDB Collective to promote the music itself and eliminate the business-like aspect of their band.

“We’re just changing it to MDB Collective to include artists, fine artists, dancers, and in general just to remove the capitalist idea of calling it a ‘record label,’” Embree said. “Because that’s not what it is; it’s a group of people who get together to make art. The only reason we sell it is to continue making it.”

Despite the changes the band imposed, the purpose of using music to positively influence people and probe them to go beneath the surface of the music to discover deeper meaning has remained the same.

“I try to make music and to write lyrics that will make people feel,” Embree said. “I want people to feel, and I want people to think. I have no interest in writing music that is not a catalyst for thought, especially free thought.”
According to ASPB Publicity Coordinator Casey Capachi, part of Rx Bandits’ appeal was how they gave diversity to the band lineup this quarter.

“We wanted to have a variety of genres on campus, and on the fall quarter lineup we had a lot of different bands, so we wanted to continue doing that,” she said.

For those who missed out on the concert, the Rx Bandits are making another appearance in the area at the SLO Brewing Company in San Luis Obispo on Thursday, January 27. More information on tour dates can be found at www.rxbandits.com.