Times are becoming strange, and the intellect even more disembodied. Last Thursday afternoon, some UCSB faculty and pioneers in the online education industry came together to discuss the UC’s future and whether it belongs on a computer screen. They suggested various degrees of transition and discussed a few experiments with “hybrid” classes. Unfortunately, they have not developed chips to plant behind our eyes.

Joking aside, I’m split on this issue. There’s a lot of potential for it to be helpful and more egalitarian, but I have many reservations. One thing that disturbs me is an almost naïve faith in technology, as well as the echo of Orwell’s Telescreens. I fear that people are already more dehumanized than is healthy and that education is already kept too distant from the world. I don’t see another dose of unreality to help put it back on track, and I fear that more will contribute to distorted levels of disconnect.

When I walk around campus, I already see people plugged into various media devices. It is this false sense of isolation that leads to reckless behavior and short-sighted selfishness, manifest in thoughtless consumption, thoughtless behavior, and even violence. Additionally, people abuse media to the point of ill health. There are some who spend 15 hours a day in front of a screen. It’s a rare and wonderful opportunity to experience a classroom and learn to empathize and engage the intellect so civilly. More importantly, a classroom setting provides references, humanity, touch, and intimacy. It may not seem as such until one is around those who do not have the same opportunities.
On the other hand, it is clear a classroom is not perfect. The drive to be the best oftentimes gets in the way of good education because people are driven by a grade. Online education gives the individual the ability to travel at the pace of the modern mind. It allows individuals to engage with the virtual classroom around their schedules and it has the benefit of anonymity. More importantly, it would be drastically cheaper and give many people a chance at a UC education who would otherwise be excluded. It could potentially connect educational forces to those at work in the real world. Students could be proposing projects to companies. Professors could be elevating politics to reason. The potential is out there, and it’s seductively exciting.

Before any of this moves forward, I hope that students and faculty ask some serious questions and consider the role that education plays, as well as the role they wish it to play. Education is the most important investment in any community, state or nation. It allows individuals to study from experts-people whose life it is to observe and think- and to bring the benefit of their insight into the future. It’s clear that it isn’t succeeding as it should—as the English Chair Alan Liu aptly noted, the $500 million dollar budget cut is a reflection of how California citizens see the UC’s role in the state. While millions help fund the institution, only a very small portion of the population directly reaps the benefit. But while online education may increase distribution, it may irrevocably cheapen the product and create a generation of hunchbacks with carpel-tunnel symptoms.

The best outcome I see out of the current debacle is a higher level of organization among the scholastic community. If education is online, there is a lot of potential to share knowledge, which belongs to itself and not to people (unless you study the law). Other than that, I hope the University does a better job marketing itself by playing a more visible role in public affairs. While there are great potentials in online education, it saddens me that this technology is being considered as a substitute rather than an enhancement. The University is a refuge for sanity. If it dies, I’m leaving the country before people start burning the books and witches. 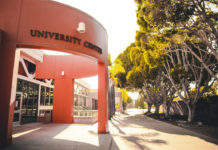